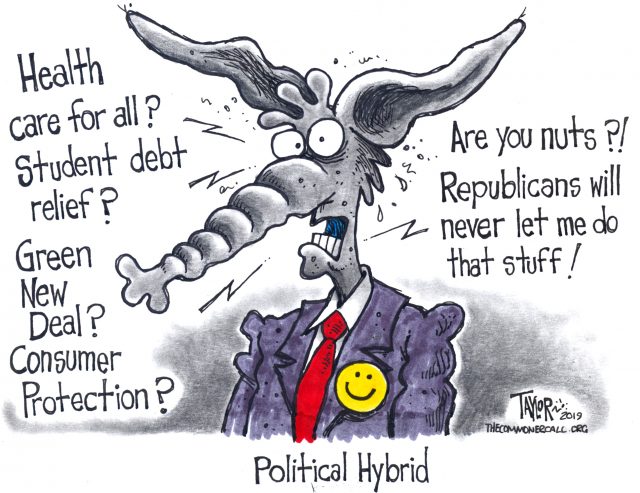 “I don’t understand why anybody goes to all the trouble of running for president of the United States just to talk about what we really can’t do and shouldn’t fight for.”

“Moderate” sounds so much nicer than, say, “enmeshed with Wall Street” or “supportive of the military-industrial complex.”

[Editor’s Note: Make no mistake, while the current crop of ‘moderate’ dems may be better on social issues, when it comes to matters of deference to Wall Street, war and protection of the corporate state, they’re a bunch of moderate republicans. These dangerous times demand far more than that. — Mark L. Taylor]

he comedian George Carlin liked to marvel at oxymorons like “jumbo shrimp” and “military intelligence.” Now, as the race for the Democratic presidential nomination intensifies, reporters and pundits at corporate media outlets are escalating their use of a one-word political oxymoron – “moderate.”

As a practical matter, in the routine lexicon of U.S. mass media, “moderate” actually means pro-corporate and reliably unwilling to disrupt the dominant power structures. “Moderate” is a term of endearment in elite circles, a label conferred on politicians who won’t rock establishment boats.

“Moderate” sounds so much nicer than, say, “enmeshed with Wall Street” or “supportive of the military-industrial complex.”

In the corporate media environment, we’re accustomed to pretty euphemisms that fog up un-pretty realities – and the haze of familiarity brings the opposite of clarity. As George Orwell wrote, language “becomes ugly and inaccurate because our thoughts are foolish, but the slovenliness of our language makes it easier for us to have foolish thoughts.”

How are policies really “moderate” when they perpetuate and increase extreme suffering due to vast income inequality? Or when they support U.S. wars causing so much death and incalculable anguish? Or when they refuse to challenge the fossil-fuel industry and only sign onto woefully inadequate measures in response to catastrophic climate change?

If Joe Biden is a “moderate,” the soothing adjective obscures grim realities. The framing was routine hours after the debate Wednesday night when the front page of The New York Times began its lead story by reporting that Biden “delivered a steadfast defense of his moderate policies in the Democratic primary debate.”

But how are policies really “moderate” when they perpetuate and increase extreme suffering due to vast income inequality? Or when they support U.S. wars causing so much death and incalculable anguish? Or when they refuse to challenge the fossil-fuel industry and only sign onto woefully inadequate measures in response to catastrophic climate change?

Biden’s record of words and deeds is “moderate” only if we ignore the extreme harm that he has done on matters ranging from civil rights and mass incarceration to student debt and the credit card industry to militarism and war.

Although Biden again tangled with Kamala Harris during the latest debate, she is ill-positioned to provide a clear critique of his so-called “moderate” policies. Harris has scarcely done more than he has to challenge the systemic injustice of corporate domination. So she can’t get far in trying to provide a sharp contrast to Biden’s corporate happy talk on the crucial issue of healthcare.

Harris began this week by releasing what she called “My Plan for Medicare for All.” It was promptly eviscerated by single-payer activist Tim Higginbotham, who wrote for Jacobin that her proposal would “further privatize Medicare … keep the waste and inefficiency of our current multi-payer system … cost families more than Medicare for All … continue to deny patients necessary care” and “fall apart before it’s implemented.”

In keeping with timeworn rhetoric from corporate Democrats, Harris repeatedly said during the debate that she wants to guarantee “access” to healthcare – using a standard corporate-friendly buzzword that detours around truly guaranteeing healthcare as a human right.

No matter whether journalists call Harris “moderate” or “progressive” (a term elastic enough to be the name of a huge insurance company), her unwillingness to confront the dominance of huge corporations over the economic and political life of the USA is a giveaway.

Whatever their discreet virtues, 18 of the 20 candidates who debated this week have offered no consistent, thoroughgoing challenge to corporate power. Among the contenders for the Democratic presidential nomination, only Bernie Sanders and Elizabeth Warren are providing a coherent analysis and actual challenge to the realities of corporate power and oligarchy that are crushing democracy in the United States.

Bait ‘n Switch: ‘Moderate’ Dems Are Anything But

Why spend one more minute compromising a vision for a just America?

Twenty candidates, three moderators, two nights of debate, and a partridge in a pear tree. It’s hard not to feel overwhelmed by the state of politics, and the second presidential debate, hosted by CNN, didn’t do much to alleviate that stress.

From the network’s embarrassing lead-in, a spectacle better suited for a WWE match than a political debate, to the fact that one of the candidates believes you can positive-think away cancer, it was hard not to see the last two nights as a direct response to Donald Trump’s presidency. So much felt crass and surreal.

More so than any bizarre theatrics, it was candidates’ insistence on appealing to “the middle” that revealed Trump’s lingering shadow over the Democratic primary. Again and again over the course of two nights, the CNN moderators and candidates alike insinuated that fighting for real change — like “Medicare for All” — would alienate moderates who don’t like Trump. This, despite the fact that the vast majority of the country supports these policies.

Democrats need to let the fact that we can’t predict what’s going to happen in 2020 free us to fight for what the country actually needs, instead of what we think a certain group of voters in a swing state will like.

Politicians and pundits need to get over the idea that the middle will save us. White supremacist terrorism is going largely unchecked, states are trying to make abortion punishable by prison time, and we are running large-scale baby jails and concentration camps on the border. There’s no such thing as moderates anymore — only those who can tolerate these injustices, and those who can’t.

Besides, it’s Trump’s extremism that the American people don’t like. The majority of people polled by Quinnipiac University this week think Trump is a racist; another poll showed that most Americans felt his disparaging tweets about members of the “squad” of four Democratic congresswomen of color were overtly racist.

Why are we letting the Republicans who would support such a person set the terms of the debate?

Mayor Pete Buttigieg noted as much on the first night of the debate, when he chided his fellow Democrats for worrying constantly about how they would be perceived by members of the rival party.

“If you can’t fight this guy, retire.”

— Cenk Uygur challenge to elected dems who are too weak-kneed to fight Donald Trump, The Young Turks (8/2/19)