“Somewhere down the line people just accepted what’s going on as normal. That includes the people responsible for fixing the problems.”

The Border Patrol agent, a veteran with 13 years on the job, had been assigned to the agency’s detention center in McAllen, Texas, for close to a month when the team of court-appointed lawyers and doctors showed up one day at the end of June.

Taking in the squalor, the stench of unwashed bodies, and the poor health and vacant eyes of the hundreds of children held there, the group members appeared stunned.

Then, their outrage rolled through the facility like a thunderstorm. One lawyer emerged from a conference room clutching her cellphone to her ear, her voice trembling with urgency and frustration. “There’s a crisis down here,” the agent recalled her shouting.

At that moment, the agent, a father of a 2-year-old, realized that something in him had shifted during his weeks in the McAllen center. “I don’t know why she’s shouting,” he remembered thinking. “No one on the other end of the line cares. If they did, this wouldn’t be happening.”

As he turned away to return to his duties, the agent recalled feeling sorry for the lawyer. “I wanted to tell her the rest of us have given up.” 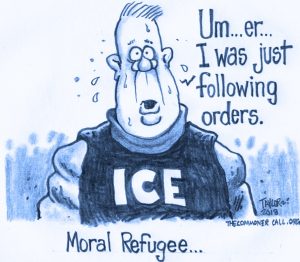 “I might not like the rules. I might think that what we’re doing wasn’t the correct way to hold children. But what was I going to do? Walk away? What difference would that make to anyone’s life but mine?”

It’s rare to hear from Border Patrol agents, especially since the Trump administration has put them at the front lines of its sweeping immigration crackdown. Public access to them is typically controlled and choreographed. When approached off duty, agents say they risk their jobs if they speak about their work without permission. As a result, much about the country’s largest federal law enforcement agency — with some 20,000 agents policing the borders and ports — remains shrouded in secrecy, even from congressional oversight, making it nearly impossible to hold it accountable.

Disturbing glimpses of some agents have recently begun to fill the void, including some that were published recently after ProPublica obtained screenshots from a secret Facebook group for current and former Border Patrol agents that showed several agents and at least one supervisor had posted crude, racist and misogynistic comments about immigrants and Democratic members of Congress. The posts raised questions about whether the deplorable detention conditions on the border were out of the control of Customs and Border Protection, as the agency had asserted, or a reflection of its culture.

Other reports followed, including one from CNN that described agents attempting to humiliate a Honduran immigrant by trying to force him to be photographed holding a sign that read in Spanish, “I like men.” The Intercept published more degrading posts from the secret Facebook group, and it reported that it appeared that Border Patrol Chief Carla Provost had once been a member. Provost has not commented.

But there was some nuance. An account of life inside a Border Patrol detention facility outside El Paso, Texas, by The New York Times and The El Paso Times, revealed that two agents there had expressed concerns about the conditions to their supervisors.

The agent who spent June in McAllen doesn’t see his reality in any of those depictions. He’s in his late 30s and is a husband and father who served overseas in the military before joining the Border Patrol. He asked not to be identified because he worried that his candor could cost him his job and thrust him and his family into the middle of the angry public debate over the Trump administration’s border policies.

His comments come at a particularly fraught moment, as politicians on the left compare the Border Patrol’s detention facilities to “concentration camps” and senior Trump administration officials, including most recently Vice President Mike Pence, dismiss descriptions of the inhumane conditions as “unsubstantiated.”

When asked about Pence’s comments, the agent said the damning descriptions of the facilities are “more substantiated than not.” And, while he didn’t embrace the term concentration camp, he didn’t dispute it either. He searched out loud for a term that might be more accurate. Gulag felt too strong. Jail didn’t feel strong enough.

The U.S. Is Quietly Opening Detention Camps For Small Children

The federal government is quietly expanding its use of shelters to house infants, toddlers and other young asylum-seekers. One Phoenix facility housed 12 children ages 5 and under, Reveal has learned, some as young as 3 months old, all without their mothers.

As part of this expansion, the government has designated three facilities to house newborns and unaccompanied teen mothers. Records obtained by Reveal from The Center for Investigative Reporting indicate a dozen children arrived at Child Crisis Arizona starting in mid-June, after it garnered a $2.4 million contract to house unaccompanied children through January 2022.

The kids, some of whom entered the facility as recently as Thursday and hail from Guatemala, Honduras, El Salvador, Ecuador and Brazil, are each living in Child Crisis without a parent.

The revelations come as the government draws widespread and growing protest over the treatment of infants, children and adults in its care. As advocates and attorneys monitor overcrowding and inhumane conditions at existing locations, new government-financed facilities, run by three agencies within two federal departments, continue to pop up around the country.

Children in at least one of these shelters, which holds a newborn, have not been provided legal services. Meanwhile, hundreds of children at the Carrizo Springs emergency shelter just outside San Antonio are not receiving legal services stipulated under federal law, Reveal has learned.

In addition, Crisis Care Arizona, a nonprofit, was recently cited by state officials for deficiencies before the arrival of unaccompanied infants and toddlers. Inspectors from the Arizona Department of Health Services found hazardous conditions in one location in February, including a “tall floor lamp (that) was unstable and tipped forward easily when light pressure was applied,” as well as unsanitary toys and chipped paint in both the restrooms and outdoor play area.

In January, state monitors found several records for children in Child Crisis’ care lacked information about a parent or health care provider. State standards indicate that water in the sink next to the diaper-changing station should run between 86 degrees and 110 degrees to ensure that employees’ hands are properly disinfected. The sink at Child Crisis in January measured just 70 degrees.

Inspections at three Child Crisis locations in Phoenix and Mesa over the past three years revealed 37 violations, including a lack of drinking water for children in classrooms, a missing lid on a vessel containing soiled diapers, an incomplete first-aid kit, and “dried yellow-orange liquid splatters on the base of one toilet.”

Phoenix City Council member Carlos García said he’s concerned about the welfare of the children at the facility. “Because of the recent deaths and rampant abuse, sexual or otherwise, at the hands of this administration, we need to make sure these kids’ lives are a priority,” he said, adding that reunification with a parent or other family member should happen as soon as possible.

“For those who don’t have that option, we need community response to make sure these children are taken care of,” he said.

The organization’s website says that its unaccompanied child population includes trafficking victims “ages infant through eighteen years of age (who) are in desperate need of a safe and appropriate shelter while seeking reunification with their family members.” The goal, according to the website, is to facilitate 65 new unaccompanied children.

Just weeks before Bethany Children’s Home was awarded its federal grant, a Philadelphia jury awarded the father of a 16-year-old $2.9 million after she took her own life while living at the facility…