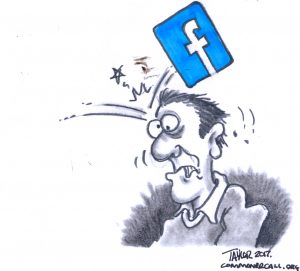 Having a huge impact by spending very little.

In the weeks leading up to a tightly contested 2018 midterm election in Virginia, a Facebook page called “Wacky Wexton Not” ran an ad that pictured Democratic congressional candidate Jennifer Wexton next to Nazi troops. Another labeled her an “evil socialist”. Yet another referenced Nazi uniforms, stating, “Wexton and her modern day brown shirts. They Are Evil. They Hate America. They Hate You.”

Who spent $211 launching 24 anti-Wexton ads? It’s unclear. The ads state they were “Paid for by a freedom loving American Citizen exercising my natural law right, protected by the 1st Amendment and protected by the 2nd Amendment.” But there’s nothing in them – or in Facebook’s new ad library that’s designed to shine light on who’s funding political adss – that provides personal information about the person or group behind the attack on Wexton (who won her race).

This small incident highlights a bigger problem as the 2020 election looms. How so-called untraceable “dark money” Facebook ads persist via easily exploitable loopholes in the ad archive, a database created in response to foreign interference and disinformation campaigns during the 2016 election. Now heading into the 2020 election, dark money ads remain a potent political weapon that the Republican party and conservative media in particular are using to push a rightwing agenda and get Donald Trump re-elected. …