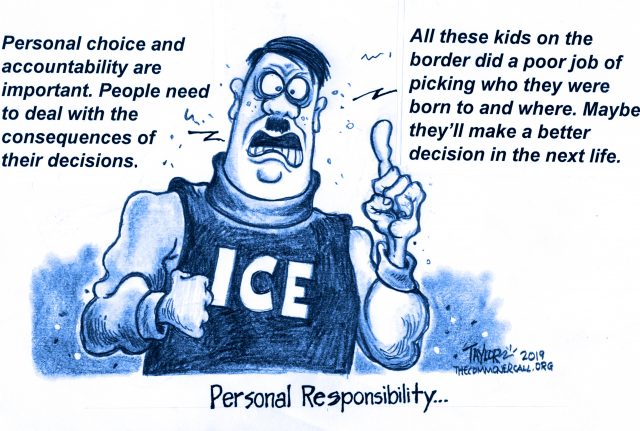 It can happen here. It is happening.

The presidency of Donald Trump has been one horror after another  — the endless lying, the coddling and worship of dictators, the rank incompetence and corruption of the people he has chosen to run government departments, the saber-rattling and about-facing with various enemies, the repeated attacks on voting rights and free speech and a free press, the countenancing of rank racism and white supremacy in Charlottesville and elsewhere, the personal corruption and grifting at his resorts and golf clubs, the reverence for a celebration of ignorance, the disdain for science and expertise, the constant tweeting and spewing of hate and stupidity and racism and misogyny and xenophobia  — the list goes on. Add your own outrages at will.

But an elemental corner was turned for me this week by a beautiful thing that happened on Tuesday evening. A friend of mine announced on Facebook that he was offering to take in a migrant family seeking asylum. …

We’ve crossed a line when Peter Vu’s offer of shelter to a migrant family becomes just another object of right-wing Trumpish fury, something to be attacked and belittled, rather than something to celebrate and be thankful for.

What one Christian does is his own responsibility. What one Jew [Muslim] does is thrown back at all Jews [Muslims].
— Anne Frank, The Diary of a Young Girl (1944)

Being a person of neither creative nor mental ability, he mindlessly finds himself inspired by the actions of a man who, many years ago, like Trump, was driven by a fierce hatred for a group of people he considered threatening to his way of life. In Trump, this hatred manifests itself in Islamophobia.

Both before and after becoming president, Trump’s anti-Muslim sentiments were well known. During the presidency of Barack Obama, Trump repeatedly insinuated in public comments, that the president was secretly a Muslim. At a campaign rally in 2015, one of the attendees said to Trump, without being contradicted by Trump, that Mr. Obama is “not even an American.” The attendee went on to say: to the candidate: “We have a problem in this country; it’s called Muslims.” As the man spoke, Trump interjected: “we need this question.” The questioner then asked the candidate: “When can we get rid of them” to which Trump responded : “We’re going to be looking at that and plenty of other things.”

It is a sad day for our country when comparisons between the leader of Nazi Germany and the president of the United States are apt.

At a campaign rally in New Hampshire, Trump promised he would kick all Syrian refugees out of the country because they might be a secret army. “They could be ISIS. . . .This could be one of the great tactical ploys of all time. A 200,000-man army, maybe.”Mid-way during his first year as president, Trump commented on the reported rise in crime in the UK and attributed the rise to what he called the “spread of radical Islamic terror.” Trump’s repeated attempt to impose what was called a Muslim ban, a ban repeatedly struck down by federal courts, are well known.

As observed at the outset, Trump was following in the footsteps of a well-known would-be world leader who perceived a threat posed by a group of people who were identified by the man who would become the leader of Germany—Adolph Hitler. Hitler didn’t care about Muslims, but he had plenty to say about Jews.

Which Corporations Are Cashing In On Customs & Border Patrol Cruelty & Concentration Camps In Your State?

The acting head of U.S. Customs and Border Protection (CBP) resigned Tuesday after harrowing reports of squalid conditions at the agency’s overcrowded detention facilities near the border with Mexico. Hundreds of children have been denied showers, oral hygiene, even mattresses. Reports described one massively strained facility in Clint, Texas, where girls aged 10 to 15 were caring for a two-year-old boy who needed to be held and didn’t have a diaper. At that facility, there were reportedly 300 children in a single room.

From 2010 to June 24, 2019, CBP paid $6.4 billion to 1,123 outside vendors for an array of goods and services including vehicles, food, furniture, housekeeping, video recording equipment, and leasing, according to Sludge’s review of data from the Federal Procurement Data System. These payments have swiftly increased under the Trump administration. The biggest recipients are defense contractors such as Lockheed Martin and PAE Aviation and Technical Services. Other top vendors include information technology company Leidos, G4S Secure Solutions, advertising firm Ogilvy, which is owned by a British parent company, and consulting firms Deloitte and McKinsey & Company.

Major consumer companies have been profiting from CBP. The agency has bought software from Microsoft and photocopying equipment from Konica Minolta. It has used the services of AT&T and Comcast. Microsoft subsidiary LinkedIn got $20,700 from CBP in 2018 for information technology software.

Use the map below to view CBP vendors in your state. Hover over the marks and vendors’ names will appear after a momentary delay.

Discover which companies in your state are supporting CPB abuses…

Link to Story and Interactive Map

Checking with the Sludge interactive map noted above, one finds two Wisconsin corporations are profiting off human misery and United States government manipulated child abuse along the border.

Johnson Controls Government Systems LLC has a $3,307,382 contract. The Milwaukee corporation’s web site features a faux patriotic vibe and proudly proclaims: “It’s the patriotic thing to do: Keep the country safe and prosperous. We can help through building and infrastructure improvements.” How providing any kind of  support for the splitting up of families and the physical, emotional, sexual abuse and even deaths of innocent children contributes to keeping the country “safe and prosperous” is a mystery. You can contact Johnson Controls here.

“We need to fight for immigrant families and stop Donald Trump’s racist policies, and we can only do it together.”

As appalling details of the conditions at immigrant detention centers in the U.S. continue to pour in—with one doctor recently comparing them to “torture facilities“—a coalition of rights groups on Friday announced nationwide “Close the Camps” demonstrations for next week to protest the Trump administration’s treatment of migrant children.

“We’ve seen the images and heard the stories coming out of child detention centers,” said MoveOn.org, one of the groups helping to organize the events, which are set to take place Tuesday, July 2.

Find an event near you.

“Children denied soap and toothbrushes, crowded into unsafe conditions,” MoveOn wrote on its website. “Separated from their families, subject to cruel treatment that leads to lasting traumas. And some dying in custody—or dying with parents as they cross the Rio Grande.”

These conditions are not an accident, MoveOn said.

“They are the byproduct,” the group wrote, “of an intentional strategy by the Trump administration to terrorize immigrant communities and criminalize immigration—from imprisoning children in inhumane conditions to threatening widespread raids to break up families to covering up reports of immigrants dying in U.S. custody and abuses by ICE and CBP agents.”

To call attention to these horrific conditions and mobilize opposition, MoveOn, United We Dream, and other advocacy groups planned demonstrations at local congressional offices nationwide as lawmakers return home for July 4 recess.

The organizations laid out three core demands on their website:

It’s going to take all of us to close the camps.

This Tuesday, July 2, while members of Congress are home for the Fourth of July holiday, we will gather at 12 p.m. noon local time at their local offices in protest. Our demands:

Will you join a local Close the Camps protest near you this Tuesday, July 2? Find an event or start your own, and bring everyone you know. Can’t attend or host an event? Text CAMPS to 668366 to continue taking action to #CloseTheCamps.

“We need to fight for immigrant families and stop Donald Trump’s racist policies,” Warren said, “and we can only do it together.”

Petition: Children deserve better than this

Together with our four million supporters, we’ve been calling Congress to make loud and clear that we refuse to give even more of our taxpayer money to DHS and its sub-agencies, CBP and ICE. We’ve sued the Trump administration over family separation and other inhumane policies against immigrants and asylum seekers. And we’ve rallied behind legislation that would protect immigrant communities and create a path to citizenship. We’re winning, but there’s still much work to be done.

Demand that Congress investigate child detention sites and hold CBP to account for its inhumane treatment of children.

Let’s come together and demand better from our government. The children deserve it.

Thanks for making your voice heard,