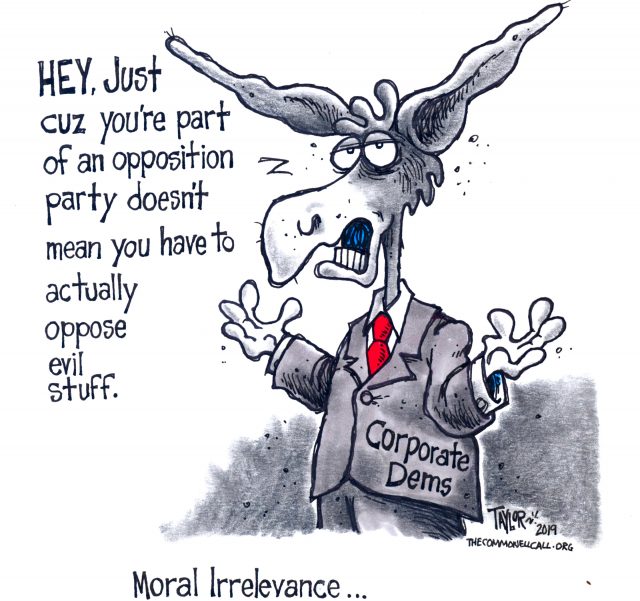 If Democrats don’t have the backs of children sleeping in cages, whose backs will they have?

While attention has been focused on the Democratic debate—in which most contenders are pushing progressive policies—congressional Democrats have moved in the opposite direction. They caved on an emergency border supplemental appropriation that can now be used by Trump to make the border situation worse, not better.

This is how it happened, folks. The House had been working on a $4.5 billion emergency border supplemental appropriation designed to respond to the inhumane conditions in migrant holding cells. The goal was to use the funds to improve standards for migrants, and include safeguards to prevent Trump from using the money to finance deportation raids or his border wall.

So a week of disgusting images at the border that repulsed a nation ended with Trump getting more money to carry out the same abuses, without accountability.

But then Mitch McConnell and Senate Republicans, along with a number of Senate Dems, came up with their own $4.6 billion bill containing none of the safeguards to limit the funding to emergency aid—even earmarking some of it to continue Trump’s draconian immigration policies, including funding for ICE and funds that could be used for additional tent camps to warehouse more migrants. Chuck Schumer did nothing to keep the House safeguards in the Senate bill.

Worse yet, when the Senate bill got to the House, Democratic centrists led by Josh Gottheimer organized enough votes to block the House from putting the safeguards back into the bill.

Nancy Pelosi caved—accepting a bill her House majority had no hand in writing—and the House passed the Senate version, with 129 Democrats supporting it.

So a week of disgusting images at the border that repulsed a nation ended with Trump getting more money to carry out the same abuses, without accountability.

Why were Dems in the Senate and Dem centrists in the House so willing to accommodate Trump on an issue that is exploding into public consciousness? As David Dayen of the American Prospect asks, if Democrats don’t have the backs of children sleeping in cages, whose backs will they have?

(Commoner Call cartoon by Mark L. Taylor, 2019. Open source and free for non-derivative use with link to www.thecommonercall.org)

‘Spinelessness’: Schumer & Pelosi Under Fire After Democrats Join GOP To Give Trump $4.6 Billion In Border Funding Without Protections For Abused Children

“I am looking for a new pharmaceutical drug that builds spines.”

“I am looking for a new pharmaceutical drug that builds spines.”

That was Rep. Pramila Jayapal’s (D-Wash.) reaction on Thursday after House Speaker Nancy Pelosi capitulated to Republicans and so-called moderate Democrats by agreeing to pass a $4.6 billion Senate border aid package that contains virtually no protections for immigrant children detained by the Trump administration.

While Jayapal and other progressives were quick to note that Pelosi deserves criticism for approving the Senate legislation—which was strongly opposed by the Congressional Hispanic Caucus and immigrant rights groups—they argued Senate Minority Leader Chuck Schumer (D-N.Y.) should share the blame for failing to whip his caucus against the measure.

Progressive Democrats said Schumer’s failure to fight the Republican legislation left the House with no leverage to negotiate stronger protections for migrant children, who are currently enduring horrific conditions in Border Patrol detention facilities in Texas and elsewhere.

After Pelosi announced Thursday that she would “reluctantly” support passage of the GOP Senate bill despite progressive outrage, the legislation sailed through the House Thursday evening with the backing of 129 Democrats. 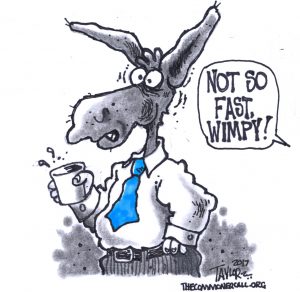 “We can’t say that we have a lawless administration or a president who should be in prison, or whatever people want to say about him, but then cave. You have to fight for what you believe.”

“Listen,” Jayapal told reporters, “I think Leader Schumer and all the Senate Democrats have to understand that we need them to stand up and oppose.”

Jayapal also slammed Pelosi’s decision to give in to McConnell and so-called “moderate” Democrats an interview with Politico, saying: “We can’t say that we have a lawless administration or a president who should be in prison, or whatever people want to say about him, but then cave. You have to fight for what you believe.”

Jayapal’s anger at the Democratic leadership for refusing to fight the Senate bill was echoed by Rep. Alexandria Ocasio-Cortez (D-N.Y.), who said Pelosi’s decision to capitulate to McConnell was an unacceptable “abdication of power” that will give the Trump administration a blank check to continue harming children at the border.

“The problem right now and the question at hand is Mitch McConnell sent us a bill and we’re putting a big checkmark on it instead of even trying to negotiate,” Ocasio-Cortez, who opposed all new funding for Trump’s deportation force, said during an interview on CNN. “What Mitch McConnell is doing is that he’s relying on the time pressure of [July 4] recess to try to ram through a bill that is completely irresponsible.”

Rep. Ilhan Omar (D-Minn.) also spoke out against the passage of the package and said the funding bill was a wasted opportunity to help children who remain in dire need [link to video clip below].

As the New York Times reported Thursday, Pelosi’s decision to approve the Senate bill came after she received “private assurances” from Vice President Mike Pence that the Trump administration would “abide by some of the restrictions she had sought.”

“They included a requirement to notify lawmakers within 24 hours after the death of a migrant child in government custody, and a 90-day time limit on children spending time in temporary intake facilities,” the Times reported, citing a person familiar with the discussions.

The “restrictions” Pelosi reportedly pushed for amounted to less than the protections Jayapal sought in House negotiations over the border aid package.

In a statement on Thursday, Jayapal said she pushed for “strong guard rails to specify that children should get food, water, medical care and legal services; that no child should be kept in these facilities for more than 90 days; and that private, for-profit contractors who violate these standards would have their contracts terminated.”

Pelosi’s private negotiation with Pence, which ended with no binding restrictions, sparked fury on social media.

“Schumer is as much responsible for this as Pelosi but, yes, it’s appalling,” tweeted The Nation‘s Jeet Heer.

Alexander McCoy, political director for anti-war group Common Defense, noted on Twitter that Pelosi is deservedly “getting a lot of the flak” for allowing Republicans to ram through legislation that was strongly opposed by immigrant rights groups and the Congressional Hispanic Caucus.

“But,” McCoy added, “skating under the radar are Schumer and Senate Democrats, who deserve just as much blame for their spinelessness, who gifted McConnell his leverage.”

(Our work is licensed under a Creative Commons Attribution-Share Alike 3.0 License. Feel free to republish and share widely.)
(Commoner Call cartoons by Mark L. Taylor, 2019. Open source and free for non-derivative use with link to www.thecommonercall.org )

The Trump-exacerbated crisis at the southern border continues to escalate. Women, children, and families seeking asylum are being met with appalling living conditions, family separation, closed borders, and tear gas.

No one deserves the physical and psychological abuse being meted out at our border. Each group listed works to protect children, women, and families. Please help continue their work by chipping in today.