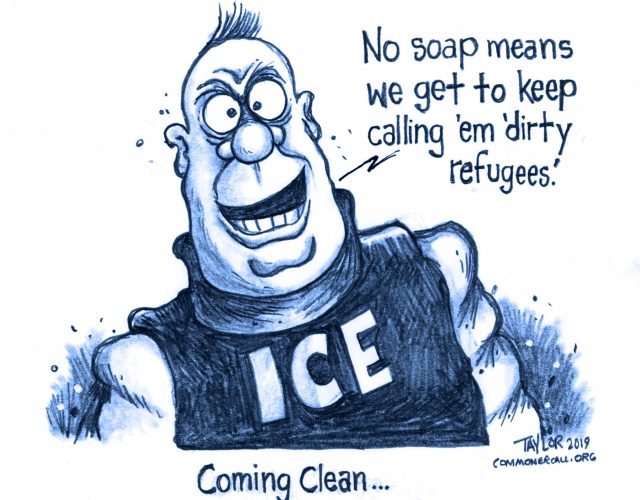 “You’re really going to stand up and tell us that being able to sleep isn’t a question of safe and sanitary conditions?’”

The Trump administration’s Justice Dept. lawyers say migrant children detained in federal concentration camps do not need soap or toothbrushes despite a settlement agreement that requires the U.S. Government to keep them in “safe and sanitary” facilities. The DOJ also argues that the children, detained in the Southern border camps, can continue to sleep on cold concrete floors in overcrowded cells without being in violation of the agreement.

The DOJ made the argument Tuesday before a three-judge panel of the Ninth Circuit, Courthouse News reports, noting the judges appeared “incredulous” with the government’s claims.

Sarah Fabian, senior litigation counsel for the U.S. Department of Justice, told the judges that the settlement agreement, known as the Flores Agreement, is vague about what constitutes “safe and sanitary” and does not specify specific items, the AP notes.

The DOJ is asking the Court to reverse a judge’s 2017 ruling on the Flores Agreement that added specific requirements, including soap and toothbrushes, which were not specified in the original.

“It wasn’t perfumed soap, it was soap. That’s part of ‘safe and sanitary.’ Are you disagreeing with that?” he asked.

Judge Fletcher also said it is “obvious enough” that “if you’re putting people into a crowded room to sleep on a concrete floor with an aluminum-foil blanket on top of them that it doesn’t comply with the agreement.” …

Migrant children face bleak conditions at detention facilities along the border. Warren Binford, a law professor who visited some of the facilities, speaks to NPR’s Lulu Garcia Navarro.