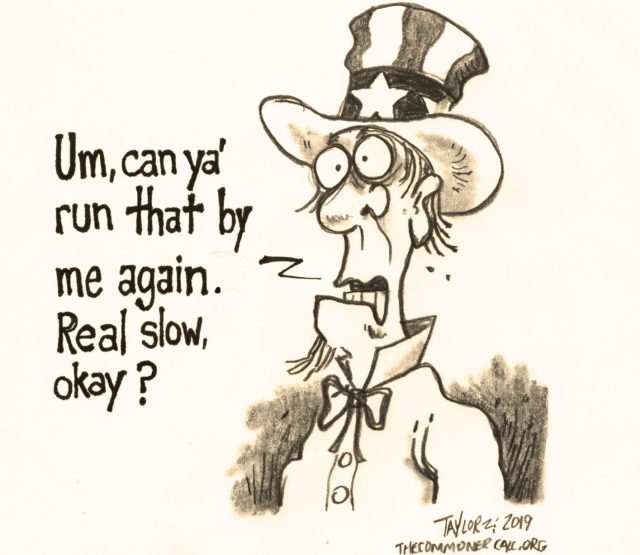 MSNBC news host Lawrence O’Donnell does an excellent job of running down the shameful history of concentration camps in the United States, supposed home of the free.

(Commoner Call illustration by Mark L. Taylor, 2019. Open source and free for non-derivative use with link to www.thecommonercall.org )

When it comes to this kind of detention, even when a government isn’t plotting a genocide, shocking numbers of people can still end up hurt—or dead.

In February 2018, U.S. border agents took a four-month-old baby from his father, who was deported overseas. Last May, a 16-year-old boy died from influenza after being held in a detention processing facility in McAllen, Texas. Earlier this month, a transgender migrant died hours after being paroled from custody.

As more unaccompanied minors and other asylum-seekers arrive on the southern border, alarming accounts continue: reports of rotten food causing illness, kennel-style fences holding migrants in El Paso, Texas, and another facility in the same city holding more than six times its capacity of detainees. This week, the Department of Health and Human Services announced that it would handle the influx of unaccompanied minors by housing some of them at Fort Sill, an Army base in Oklahoma that held detainees of Japanese descent during World War II, a bleak reminder of another time when America failed to live up to its values.

A camp in a country in which the leader openly expresses animosity toward those interned, in which a government detains people and harms them by separating children from their parents or deliberately putting them in danger, is much closer to a concentration camp than a refugee camp.

Beyond each individual crisis, we should ask, what are these places? Are they refugee camps, or are they something else? History provides the answer.

People today tend to think of Nazi death camps as defining the term “concentration camp.” But before World War II, this phrase was used to describe the detention of civilians without trial based on group identity. During a rebellion in Cuba in 1896, the Spanish Empire swept rural peasants—mostly women and children—off the land. Declaring them a threat, Spanish forces held them behind barbed wire in fortified cities. Around 150,000 people died. Three years later, America opened its own concentration camps for women and children as part of an effort to suppress a revolt in the Philippines during the Philippine-American War.

Around the globe in southern Africa, the British government opened its own concentration camps in the new century, embracing civilian detention as a civilizing force for an “uncultured” people. Unsanitary camp conditions and inadequate food triggered medical crises. By the time the British moved to address the disaster they had created, it was too late for many detainees. Tens of thousands of children died. …

(Andrea Pitzer is the author of One Long Night: A Global History of Concentration Camps.)

Expert On Concentration Camps Says That’s Exactly What The U.S. Is Running On The Border

“Let’s say there’s 20 hurdles that we have to get over before we get to someplace really, really, really bad. I think we’ve knocked 10 of them down.”

Surely, the United States of America could not operate concentration camps. In the American consciousness, the term is synonymous with the Nazi death machines across the European continent that the Allies began the process of dismantling 75 years ago this month. But while the world-historical horrors of the Holocaust are unmatched, they are only the most extreme and inhuman manifestation of a concentration-camp system—which, according to Andrea Pitzer, author of One Long Night: A Global History of Concentration Camps, has a more global definition. There have been concentration camps in France, South Africa, Cuba, the Soviet Union, and—with Japanese internment—the United States. In fact, she contends we are operating such a system right now in response to a very real spike in arrivals at our southern border.

In a grotesque formulation of the chicken-and-the-egg conundrum, housing people in these camps furthers their dehumanization.

“We have what I would call a concentration camp system,” Pitzer says, “and the definition of that in my book is, mass detention of civilians without trial.”

Historians use a broader definition of concentration camps, as well.

“What’s required is a little bit of demystification of it,” says Waitman Wade Beorn, a Holocaust and genocide studies historian and a lecturer at the University of Virginia. “Things can be concentration camps without being Dachau or Auschwitz. Concentration camps in general have always been designed—at the most basic level—to separate one group of people from another group. Usually, because the majority group, or the creators of the camp, deem the people they’re putting in it to be dangerous or undesirable in some way.”

Not every concentration camp is a death camp—in fact, their primary purpose is rarely extermination, and never in the beginning. Often, much of the death and suffering is a result of insufficient resources, overcrowding, and deteriorating conditions. So far, 24 people have died in the custody of Immigration and Customs Enforcement under the Trump administration, while six children have died in the care of other agencies since September. Systems like these have emerged across the world for well over 100 years, and they’ve been established by putative liberal democracies—as with Britain’s camps in South Africa during the Boer War—as well as authoritarian states like Nazi Germany or the Soviet Union. Camps set up with one aim can be repurposed by new regimes, often with devastating consequences. …

“Another issue is that these camp systems, no matter where they are in the world, tend to fall victim to expanding criteria. The longer they stay open, the more reasons a government finds to put people in them. That’s particularly true if a new regime takes control of an existing system, as the Trump administration did with ours.”

“On Meet the Press Daily, host Chuck Todd singled out Rep. Alexandria Ocasio-Cortez‘s recent comments about “concentration camps” on the US Southern border and castigated “sheepish” Democrats who didn’t call them out as proof that both sides of the political spectrum “cannot talk about right and wrong anymore.”

Playing a video post from Ocasio-Cortez’s Instagram feed, Todd took aim at the freshmen Congresswoman for grossly distorting history for her recent use of that loaded term to describe the Trump administration’s immigrant detention camps.

“She just did the people there a tremendous disservice,” Todd intoned, referring to undocumented immigrants being detained in what have been documented as sometimes inhumane conditions at the border. “Be careful comparing them to Nazi concentration camps because they’re not at all comparable in the slightest.”

Ocasio-Cortez did not invoke the Nazi regime in her original comments about the Trump administration detention camps, although she did tweet #NeverAgain, which is commonly understood to specifically reference the Holocaust. She then later tweeted follow-up messages that specifically distinguished between the two as historically distinct and cited analysis that supported her argument.”

I spent 40 years preparing for this test, only to watch most of my brethren fail.

White evangelicals, you may not have voted to put children in cages, but you are responsible.