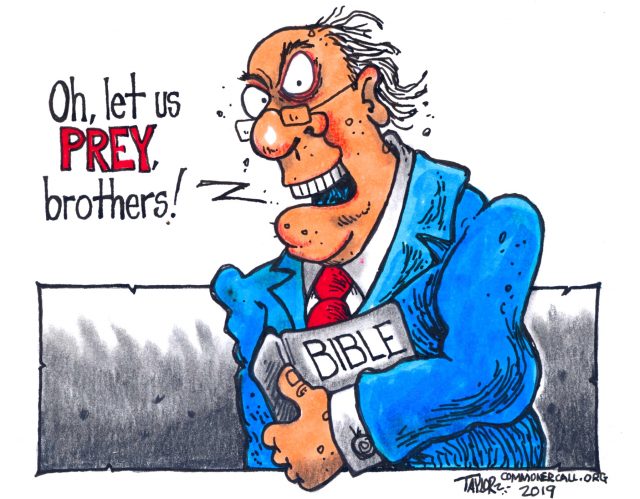 Given the untoward influence far right evangelical and fundamentalist churches have on the republican party and public policy, it is important to expose the multiple hypocrisies to be found among many in the fundamentalist religious/political movement. Throughout all fascist governments far too many churches and clergy play important roles in defending, promoting, excusing, minimizing and sometimes even participating in government abuse. This is a pattern that is certainly seen with the Trump administration.

The Commoner Call will be running an occasional feature of recent reports of fundamentalist religious abuses. As the collection of tawdry church news below reveals, sometimes the abuse is by a lone clergy or church employee, other times church leaders and the entire hierarchy of a church can be involved in abuse and aligned to cover-up abuse. Certainly, not all churches and clergy engage is such behavior but the more extreme, rigid and patriarchal the religious organization the more of this kind of behavior is found and the more politically rightward it tends to be. It is important to expose such behavior whenever it is found.

Abuse Of Faith Data Base

The Southern Baptist Convention declined to keep a list of key church officials and volunteers convicted of sex abuse crimes. The Houston Chronicle found 263 such offenders during the past 20 years in 30 states and Washington D.C. This list is current as of June 2019.

The story begins in 2012 when Falwell and his wife enjoyed a stay at the Fontainebleau, a Florida luxury resort known for topless sunbathing and a massive underground nightclub described by one travel guide as “30,000 square feet of unadulterated fun.”

While at the resort, the Falwells struck up a conversation with a 21-year-old man named Giancarlo Granda, who was working as a pool boy at the Fontainebleau. They soon entered into a business relationship with Granda, who at the time was studying finance at Florida International University.

The Falwells subsequently agreed to help Granda purchase an LGBT-friendly youth hostel in Florida that features pamphlets for strip clubs, as well as a sign that reads, “No Soliciting, Fundraising, Politics, Salesmen, Religion.”

According to court records, Falwell said that his family invested a total of $1.8 million, including $800,000 for renovations, to help Granda build up the hostel into a successful business.

Trouble began, however, when Granda’s investment partners claimed that they had been promised an ownership share of the hostel — an offer the Falwells denied ever making.

It’s at this point that the partners sued the Falwells over ownership of the hostel, which is when accusations of “compromising photographs” involving the Falwells began flying around.

“By late 2015, the lawsuit over ownership of the hostel had devolved into a fight over compromising photos, according to several people involved in the case,” the Times reports. “It was understood that between Mr. Granda, the Fernandezes and their lawyers, one or more people were in possession of photographs that could be used as leverage against the Falwells.” …

A former [as of May 2019] Southern Baptist pastor, who supported a strict abortion bill in Texas which would have made it illegal for women to undergo the procedure, has been arrested on suspicion of sexually assaulting a teenage relative.

Stephen Bratton, a former pastor at Grace Family Baptist Church in Houston, is accused of the continuous sexual abuse of a child after allegedly engaging in “sexual intercourse multiple times a day or several times a week” with the victim between 2013 and 2015, Thomas Gilliland, spokesman for the Harris County Sheriff’s Office, told the Associated Press. Police did not reveal how Bratton and the teenage girl are related.

The Houston Chronicle reports that Bratton was released from custody in May after posting a $50,000 bond. Court records also show that an emergency protection order was granted for his release.

The Grace Family Baptist Church said that they were made aware of the allegations against Bratton after he allegedly confessed to committing the abuse to fellow pastors Erin Frye and Aaron Wright on May 16. The Church said they contacted police the same day and confirmed that Bratton has been excommunicated and is no longer a member. …

A 24-year-old intern at the Long Hollow Baptist Church in Tennessee was arrested and charged with three counts of statutory rape by an authority figure when his sexual encounter with a student was uncovered.

Benjamin Widwirck was working with the church over the summer, according to a website post by Pastor Robby Gallaty. The intern was serving during a 10-week service with a student team. He’d heard rumors of the situation in December, and contacted local police and church leadership, NewsChannel5 reported.

“I am both heartbroken for the victim and angry that this took place,” he wrote. “In an effort to be as transparent and open as possible, I want to share with you as much as we can.” …

Members of the Mexican church whose leader was arrested in California on human trafficking and child rape charges insisted Wednesday on his innocence, and decried his $25 million bail as disproportionately high.

Naason Joaquin Garcia, who is known by members of the La Luz del Mundo (The Light of the World) as the “Apostle,” faces US charges for 26 suspected felonies, including rape of minor and child pornography, committed between 2015 and 2018.

Prosecutors allege Garcia and three co-defendents – all women affiliated with the church – coerced minor girls into performing sexual acts by convincing them that if they went against the “Apostle” they were also going against God. …

A “Straight Pride” parade is slated to be held in Boston on August 31, according to its organizers, who posted a map of the route (above). Many on social media this week laughed it off, while many others expressed anger and outrage.

Some of the organizers reportedly have ties and histories that should cause Boston authorities and residents concern.

“The event is a front for a far-right group founded by notorious right-wing brawler Kyle ‘Based Stickman’ Chapman,” writes Will Sommer at The Daily Beast.

Last year a California news outlet reported: “White Nationalist Kyle ‘Based Stickman’ Chapman Arrested for Felony Assault with a Deadly Weapon.” That article noted Chapman has “a violent history,” and a “judge barred him from possessing weapons of any type.”

Meanwhile, Straight Pride organizer Mark Sahady “isn’t just a particularly aggrieved straight dude,” the Daily Beast notes. “Instead, he has a long history participating in controversial right-wing events around Boston as an organizer for Resist Marxism, a group Chapman founded at the height of the fame he earned attacking left-wing anti-fascist activists with his eponymous ‘stick.'”

Sommer reports that “Sahady has endorsed the far-right ‘helicopter’ meme, which calls for liberals to be thrown from helicopters as in Augusto Pinochet’s Chile.” …

A shocking report Wednesday revealed that the Catholic Church is using a secret fund of oil money in West Virginia to help pay off cardinals and young priests one bishop mistreated.

According to the Washington Post, Bishop Michael J. Bransfield wrote checks for more than a decade under his personal account, only to be reimbursed by the West Virginia diocese. The alleged hush money totaled $350,000, with one gift as large as $15,000.

In total, 11 powerful clerics scored checks that were ultimately edited out of a final report at the request of Archbishop William Lori of Baltimore, who oversaw the investigation. Lori was also one of the names who got a payout and whose name was removed.

The Post obtained both versions of the report to compare and asked Lori for a comment. He said he was giving the money back and hopes it will be given to Catholic Charities.

“He acknowledged that the names of senior clerics were cut from the final report,” the Post wrote. …