Coulee DSA and dozens of DSA chapters around the country held Medicare for All-related actions this past weekend.

Over fifty chapters across twenty states participated by canvassing their communities and talking to their
neighbors about healthcare, holding town hall discussions, tabling and organizing other educational
events.

Coulee DSA members knocked on over 200 hundred doors in La Crosse. Members in Viroqua spoke with
over 150 people around the Viroqua farmers market.

“Democratic Socialists of America is organizing a strategic, coordinated campaign led by members and
chapters to build and maintain congressional support for HR 1384, the Medicare for All Act of 2019,”
said DSA National Director Maria Svart. “While we push the bill to a vote in the House, we are creating a
litmus test for all people seeking to represent us in public office: are they on the side of healthcare
profiteers or the side of the working class?”

“We heard again and again from people across the political spectrum that our current healthcare system is
broken,” said Coulee DSA member Eric Timmons. “It is clear that there is a hunger for a system that gets
rids of private insurance middlemen and doesn’t leave anybody out.”

Coulee DSA asked people to sign a petition demanding that Congressman Ron Kind (D-La Crosse) join
the majority of House Democrats in co-sponsoring the Medicare for All Act. The bill may soon face a
vote in the House for the first time.

“National polls show widespread bi-partisan support for Medicare for All. That is definitely true among the people we’ve spoken to. It is high time Mr. Kind starts listening to his constituents, and not his corporate donors from the insurance and pharmaceutical industries,” said Evan Dvorsak, of Coulee DSA. “Mr. Kind is a senior and highly respected member of the House, and his support could make a huge difference in getting this life-saving legislation passed.” 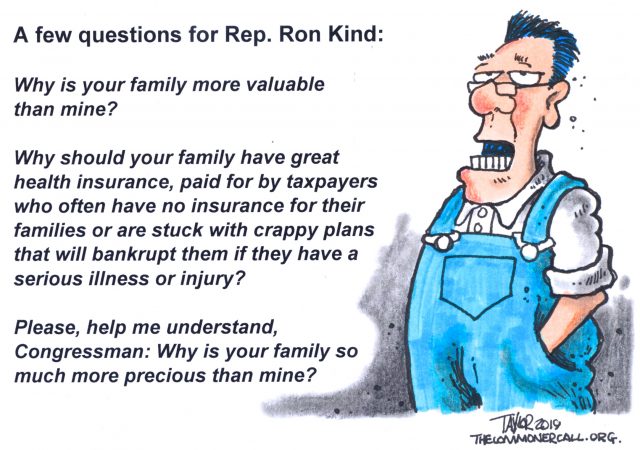 Nearly 30 million Americans are currently uninsured and an additional 30 million are underinsured,
leaving them unable to afford rising out-of-pocket costs. At the same time, the beneficiaries of our current
system are seeing record profits, with the average health insurance CEO making over $20 million per
year. Funded through progressive taxes, Medicare for All will eliminate out-of-pocket spending and put
an end to private health insurance, saving the average family thousands of dollars every year.
“We’re committed to winning this struggle,” said Dvorsak. “Guaranteeing healthcare for all is a moral
imperative, and Medicare for All is the best way to make that a reality.”

*****
Contact: Coulee DSA members would be happy to speak more on this subject. Feel free to contact us at
Couleesocialists@gmail.com