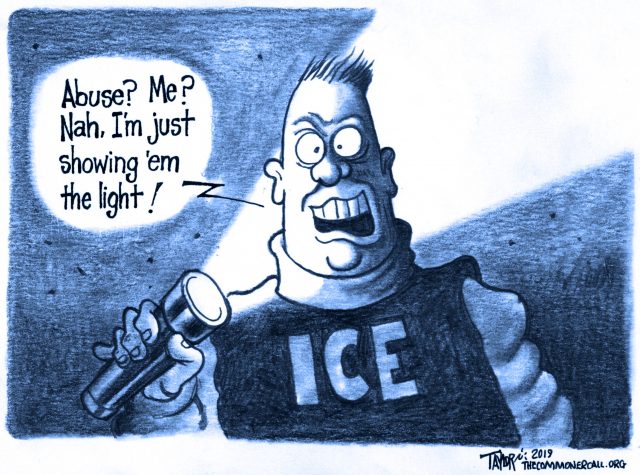 “Tonk” is defined by agents as “the sound heard when a ‘wetback’ is hit over the head with a flashlight.”

In the days before he allegedly struck a 23-year-old undocumented Guatemalan man with a government-issued Ford F-150, Border Patrol agent Matthew Bowen sent a text to a fellow agent. In the exchange, which federal prosecutors now claim offers “insight into his view of the aliens he apprehends,” Bowen railed against unauthorized migrants who’d thrown rocks at a colleague as “mindless murdering savages” and “disgusting subhuman shit unworthy of being kindling for a fire.” The text message also includes a plea to the president: “PLEASE let us take the gloves off trump!”

Two weeks later, on December 3rd, 2017, Bowen was on patrol near Nogales, Arizona, when he spotted a suspected unauthorized border crosser. Identified as Antolin Rolando Lopez-Aguilar in a federal affidavit, the man had been hiding but took off running back toward the Nogales point of entry, “in an apparent effort to avoid apprehension,” the affidavit states.

Instead of pursuing Lopez-Aguilar on foot, Bowen chased after him in his federal vehicle, known as a “Kilo Unit” in Border Patrol lingo. As caught on camera, Bowen maneuvered “the front grille of the truck directly behind Lopez-Aguilar,” according to the affidavit. With the F-150 bearing down on him, Lopez-Aguilar reached back “to ‘push off’ of the hood” before Bowen “accelerated the… Kilo Unit directly into the back of Lopez-Aguilar’s body, knocking Lopez-Aguilar to the ground,” the document states. The Ford’s tires came to a full stop “within inches of running Lopez-Aguilar over where he lay on the ground.”

Bowen, now 39, was indicted in May 2018, on two counts — one, a civil rights crime, for what prosecutors call Bowen’s choice to use “deadly force against a person who was running away from him and posed no threat,” and the other, an obstruction charge, for his alleged effort to “cover up his crime.” Bowen has pleaded not guilty to both counts. (Lopez-Aguilar was scraped up, but not seriously injured according to court documents, and reportedly sentenced to 30 days for the misdemeanor offense of illegal entry into the United States.)

Bowen’s trial is due to begin in August. But the case is already shining a spotlight on a troubled culture at Border Patrol, the law enforcement arm of Customs and Border Protection …

Read the Rest and Court Document of Agent Text Messages