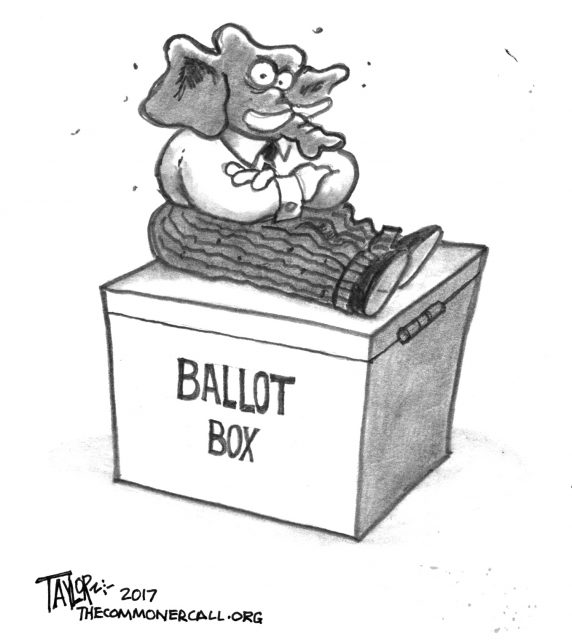 There is a fascinating lawsuit playing out in New York and, as far as I can tell, the only outlet that fully realizes its importance is Josh Marshall’s Talking Points Memo, which has put reporter Tierney Sneed on the case.

In brief, Matt Dunlap, Maine’s Democratic Secretary of State, is suing the president*’s phony, and now defunct, “voter-security” commission in order to obtain internal commission documents that Dunlap claims were withheld from him, even though he also was a member of the commission. His primary targets are emails exchanged between Kris Kobach, J. Christian Adams, and Hans von Spakovsky.

To those of us who follow voter suppression efforts around the country, that poxy trio is the Legion of Super Villains. Their very involvement in the commission belied the good-faith basis for its existence anyway, but Dunlap’s lawsuit has proven to be a gold mine of information as to what a thoroughgoing bag-job—to say nothing of what a waste of time and money—the commission was.

“However, another now-public email, sent in February 2017, showed that von Spakovsky had complained to allies of then-Attorney General Jeff Session about the “disturbing” news that the White House was considering naming Democrats and “mainstream Republicans” to the panel. The email was forwarded to Sessions himself. “There isn’t a single Democratic official that will do anything other than obstruct any investigation of voter fraud and issue constant public announcements criticizing the commission and what it is doing, making claims that it is engaged in voter suppression,” von Spakovsky wrote in February 2017, in an email that cc’d Adams. “That decision alone shows how little the WHouse understands about this issue.””

Apparently, the primary concern of these guys was that the White House wasn’t putting together a big enough bag-job. As Sneed reports, the judge in the case is being as careful as she can. She’s paused her order mandating the release of the documents to Dunlap because there is some question as to whether some of the emails he’s seeking were exchanged before Adams and the rest of them had been appointed formally to the commission. Nevertheless, what we already have learned from Dunlap’s lawsuit is proof enough that the commission was an important weapon in the Republican Party’s war against free and fair elections in this country.” …

AOC wants an explanation on the dirty trick the Republicans are playing on the US census. John Iadarola breaks it down on The Damage Report.

“The latest face-off between House Democrats and President Donald Trump is over the proposed citizenship question on the 2020 census.

The House Oversight Committee voted Wednesday to recommend holding Commerce Secretary Wilbur Ross and Attorney General William Barr in contempt of Congress for refusing to comply with subpoenas in the committee’s investigation into how and why the question was added.

Trump invoked executive privilege earlier in the day, refusing to share documents that House Democrats want for their investigation.

The congressional back-and-forth is just one battle in the ongoing war over the citizenship question, which will ask all census respondents to declare whether they are a citizen of the United States on the standard census form for the first time since 1950.

The Trump administration claims it needs to ask the question to collect the data for the Justice Department to enforce the Voting Rights Act. But Democrats worry the real motivation is to discourage noncitizens from responding, skewing the population counts used to draw Congressional districts and eventually giving Republicans a bigger electoral advantage.”