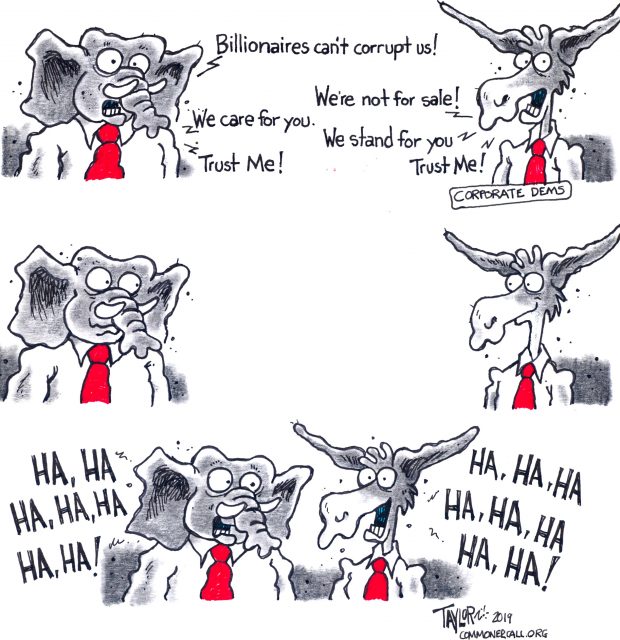 “The Democrats have no power to change the system. Yet. So if they want to stay in the game and be competitive they’re going to have to match the Republican’s fundraising juggernaut, otherwise Trump will out-organize, out-advertise and flat out bury us in 2020.”

Finally, two other numbers: $7.8 million and $31.5 million. The first is what Hillary had left on hand at the end of the election. The second what Trump had on hand.

Clearly, if money was the determining factor upon which all must be sacrificed we would be talking about President Hillary Clinton. Hillary raised well over twice what Trump did and spent nearly all of it … and lost while Trump had more money left for 2020.

Sure, she won the popular vote — 63 million to 60 million — but 100 million didn’t vote because so many voters have grown cynical about politics because of the corrupting role of big money. Trump got the winning Electoral College votes with wins in the upper Midwest. Hillary didn’t come to Wisconsin for the general election but she did do a series of big money fundraisers in Hollywood in those last couple weeks.

We can actually say that one of the contributing primary reasons for Trump’s win was too much focus on money by the dems.

FDR was consistently outspent 10-to-1 during all four of his successful campaigns. He had less money but he had more ideas that resonated with the needs of the people. That is what the dems need to focus on in 2020 and show a clear line between themselves and the old, corrupting politics-as-usual dependency on big money.

When I donate to Sanders and Warren I am expecting they will fight for my needs and concerns about my fellow citizens. When Super PACs and the wealthy donate they are doing so for the same reason. Their interests don’t align with mine … or probably yours.

Keep that in mind when any candidate or any party accepts big money from those sources or argues for the need to doing politics in that same-old, decrepit, corrupting way.

Source for above numbers: Tracking the 2016 Presidential Money Race