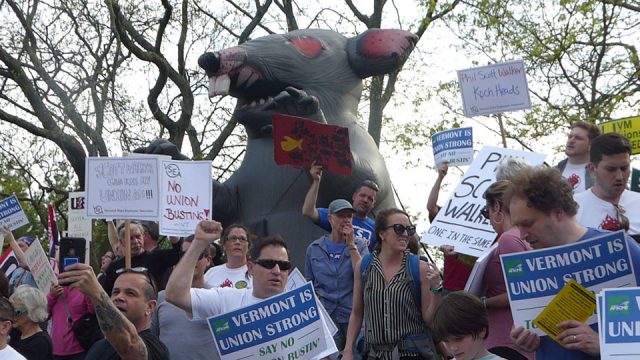 BURLINGTON, Vt.—In a protest that got wide viewing on social media, Vermont workers and progressives – complete with The Rat – “greeted” infamous former Wisconsin GOP Gov. Scott Walker when the union-busting ex-Badger State chief executive spoke in Burlington on May 30.

Walker went to the city’s Hilton Hotel to keynote a Republican fundraiser inside. Outside was the huge protest, featuring The Rat, symbol of a scab. There’s no indication from news reports whether Walker encountered the protesters, crossed their line – or ducked in a back door, as his also-ousted Illinois anti-worker GOP colleague, Bruce Rauner, did in Chicago. 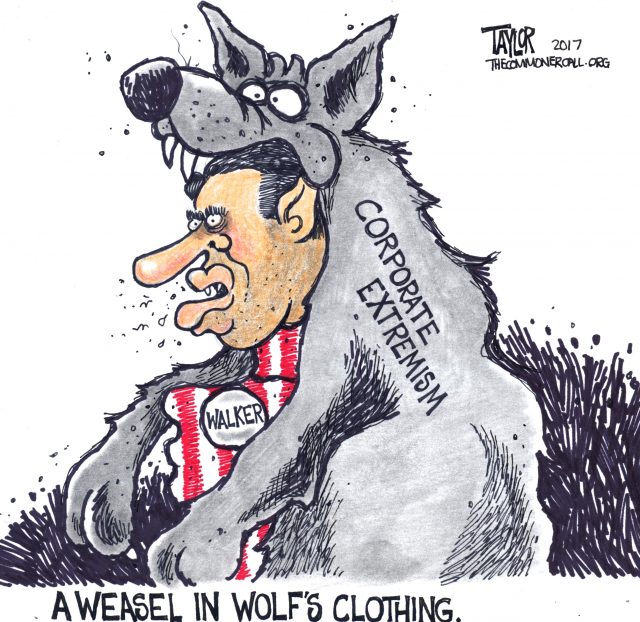 And Sen. Bernie Sanders, Ind-Vt., who’s making his second run for the Democratic nomination for president, urged his supporters in the state – he’s the wildly popular former Mayor of Burlington – to join the protest, too.

Walker was a favorite Sanders target when the senator ran in 2016. “In other words,” Sanders said then, “you can get a pretty good idea of what I’ll do as president by looking at Scott Walker and thinking I’ll do exactly the opposite.”

Walker became nationally infamous for jamming rabidly anti-public worker union Act 10 through the gerrymandered Wisconsin legislature in 2011. It stripped the state’s public worker unions – except those few that backed his bid the year before – of collective bargaining rights, union dues and other authority. Later, he got GOP lawmakers to make Wisconsin a so-called right-to-work state.

Walker also forced local unions to stand for recertification, by absolute majority votes, yearly. The result was a large drop in union membership and receipts, and in the Wisconsin economy, too. …