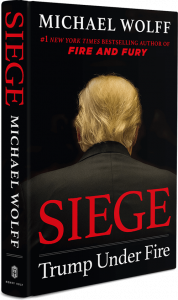 Michael Wolff is back and not with a whimper. The latest installment of his Trump chronicles picks up where Fire and Fury ended. Once again, it leaves the president bruised and readers shaking their heads.

As Wolff describes it, Donald Trump calls Kushner “a girl”. As for his vice-president, he’s a “religious nut”. “Why does he look at me like that?” Trump asks about Pence’s beatific gaze. As for Pence’s wife, Karen? “She really gives me the creeps.”

Steve Bannon supplies a running commentary for which Wolff calls him his Virgil. Like Dante’s Inferno, Siege ends on hell’s bottom rung.

Wolff’s tale is credible enough to be taken seriously and salacious enough to entertain. If you have doubts about Wolff’s credibility, and many do, the latest blowup over the USS John S McCain is one more reminder that in the Age of Trump, truth is weirder than fiction. Much weirder. …