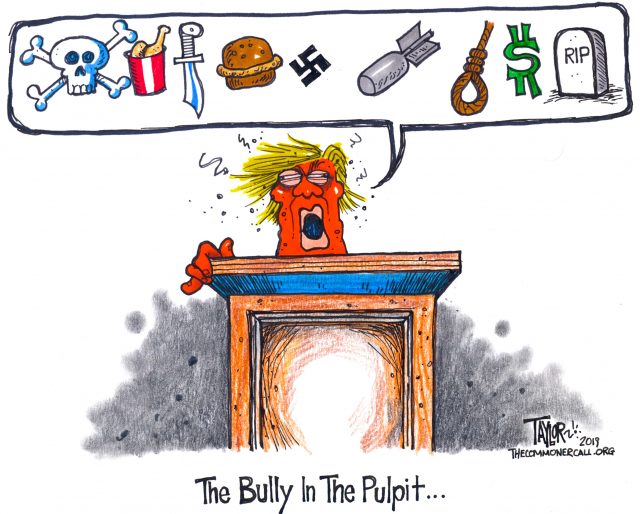 “To see what is in front of one’s nose needs a constant struggle.”
— George Orwell

As evidence of Hitler’s intentions crystalized in the 1930’s, many politicians who recognized the danger continued to vote against vital defense expenditures. George Orwell, reflecting on that and other cases of “ignoring facts which are obvious and unalterable,” concluded: “To see what is in front of one’s nose needs a constant struggle.”

Until Germany invaded Poland in 1939, there was room for wishful thinking regarding Hitler’s plans. Current defenders of the American Republic, by contrast, confront the “obvious and unalterable” fact that an assault has already been launched. The Mueller report puts in front of our noses Russia’s “sweeping and systematic,” interference in the 2016 election, its perception that “it would benefit from a Trump presidency,” its work “to secure that outcome,” and the Trump campaign’s expectation “that it would benefit electorally from information stolen and released through Russian efforts.”

Everyone able and willing to distinguish facts from lies has witnessed Trump’s brazen cover-up of Russia’s attack. He has never named or denounced the aggressor, while depicting the investigators as traitors who used a hoax to attempt a coup.

Today, with America’s “bully pulpit” in the hands of a demagogue, defenders of our 230-year-old Constitution have to win for themselves the constant struggle to face what is in front of their noses.

As November 3, 2020 approaches, Trump ignores calls to defend the elections and fails to confront Russia, inviting more cyber-sabotage on his behalf. What if he loses nonetheless? Consider a playscript whose author casts himself as defender of the nation against the “globalist elite” and their “deep state” henchmen. In Act I, he miraculously outwits their attempt to rig the 2016 election; in Act II he thwarts their attempted coup. Act III completes the plot, as the Democrats manage to fake a 2020 victory, only to face a resolute President who—having forewarned of a final deep state conspiracy to regain power—announces a state of emergency.

Better outcomes are possible, but inaction based on rosy predictions invites deepening danger. Time is passing, as it did in the weeks following President Obama’s discovery of Russia’s attack, and as it did while we waited for Mueller. Investigators continue to investigate what they already know. The Republican conscience does not stir. The Republican base is unmoved. The “investigation” of the investigators begins. The “coup plot” reverberates across cable news and Twitter. We watch—or don’t—an unfolding illustration of Orwell’s “plain, unmistakable facts being shirked by people who in another part of their minds are aware of those facts.” …