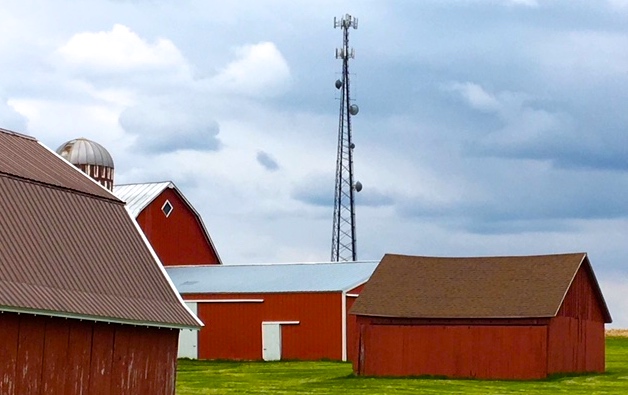 Cell tower just off Hwy. 35 between Viroqua and Westby, in Vernon County.

SOUTHWEST WISCONSIN – Local residents in Vernon and Richland counties are asking some hard questions about the company Bug Tussel’s plans to install dozens of cell phone towers in the two counties in 2019. Residents in the Richland County, Town of Bloom, near West Lima, say that through Vernon Telephone Cooperative they already have great, affordable, internet from fiber optic cable laid to their front door, as well as adequate cell phone service.

The company Bug Tussel Wireless, based in Green Bay, Wisconsin, has gotten State of Wisconsin Broadband Expansion grant funds earmarked for providing internet to underserved areas in rural Wisconsin. On the tower siting applications they file, in most cases submitted to county zoning committees, it says that “the proposed site will have AT&T mobile voice and internet services, and also include Bug Tussel Wireless fixed internet services.” 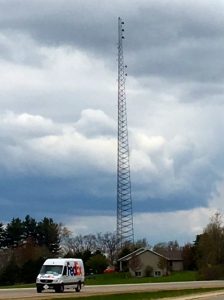 “We hold public hearings, but really we don’t have any power to deny these permits. I feel bad when we hold these hearings and give citizens the impression that they really have a voice in these decisions, because we don’t anymore.”

The name ‘Bug Tussel’ is an interesting and quirky name for a company that builds cell towers and delivers mobile internet services, especially in rural Wisconsin. It seems Bug Tussle, Arkansas, in the Ozark Mountains, was home to the Clampett family from the ‘Beverly Hillbillies’ television sitcom that aired in the 1960s.

The company has been active in Southwest Wisconsin with building towers since the early 2000s, but according to the Iowa County Director of Planning scott Godfrey, “it has really picked up since Act 20 was passed by the Wisconsin Legislature in 2012.”

Corporate control of legislature leads to loss of local say-so

From an article published in the Isthmus newspaper in November of 2013:

“The last budget session was a lovely one for AT&T and other wireless phone providers. Lobbyists for these companies had pushed for legislation in countless states to end local control over the installation of cell phone towers, with mixed success.”

“But no state was more receptive to these lobbyists than Wisconsin, where Republican legislators on the Joint Finance Committee grabbed the bill as written by telecom lobbyists, plunked it into the budget bill and sent it on to the full Legislature, which passed it.”

(Commoner Call photos by Mark L. Taylor, 2019. Open source and free for non-derivative use with link to www.thecommonercall.org )