“The special counsel’s finding is clear. Case closed. Case closed. This ought to be good news for everyone, but my Democratic colleagues seem to be publicly working through the five stages of grief. First stage is denial.”

‘By early Tuesday evening, more than 720 former federal prosecutors who worked in Democratic and Republican administrations had signed a letter asserting that President Trump would have been charged with obstructing justice based on special counsel Robert S. Mueller III’s findings — if Trump were not the president.”

“…10 years of tax information obtained by The New York Times paints a different, and far bleaker, picture of his deal-making abilities and financial condition.”

A heads up – we are in for a world of trouble.

Trump the authoritarian is asserting and even inventing his executive powers, including an invention of extending his term of office, and ignoring or fighting back against all Congressional oversight. It is Trump, his lawyer Attorney General William Barr and Mitch McConnell aligned against the House, but there are bigger and more immediate issues at stake.

Two issues are worth highlighting – 1) Trump’s vision of staying in the White House for a longer (first) term and 2) Trump, Pompeo, Bolton and Netanyahu flirting with military confrontation with Iran – in simpler words, war.

Hold these first two issues up for serious consideration. All the battles over release of the Mueller report, Trump’s taxes, House appearances by Mueller or former Trump White House counsel Don McGahn and many other skirmishes are all important, but far less so. These will drag out as legal processes with many words exchanged, the overall outcome is critically important – but this will take time and does not warrant the same immediacy of concern as Trump’s saber rattling or authoritarian view of himself as King Trumputin I.

Before I jump past the Mueller report to consider the more immediate threats, let’s consider the issue of Trump-Russia conspiracy. Many are getting this wrong. Many — like McConnell — are deliberately getting this wrong. Here’s an example from a Financial Times article about the White House telling former legal counsel Don McGahn to ignore a House subpoena, “Mr Mueller concluded there was no proof of conspiracy”. Not true – Mueller decided there was not enough proof of conspiracy to warrant charge, there was evidence of crimes, not charging is far different from no evidence. I predict these Trump-beneficial overstatements will be walked back over time.

You will want to read about Trump fraud around his taxes (below), but first the imminent risks…

Trump seized on an idea put forward by evangelical fraudster Jerry Falwell Jr. calling for adding two more years to his term citing no obstruction, no collusion, spying on his campaign and a soaring economy. Trump tweeted about “stolen two years” but did finish with, “we will never be able to get back…”

Before rushing past this as a nothing-burger consider this closing statement from Ed Kilgore for ‘New York’:

“It’s a time-worn rationale for authoritarian measures aimed at “saving” constitutional regimes they overthrow. And even if Trump keeps hinting at it just to mess with the minds of his critics, the effect it has on sycophants like Jerry Falwell Jr. could be unfortunate. The 2020 election could be delegitimized on the right before it even happens.”

This is NOT the last time we’ll hear about “stolen two years” and “reparations”. It is fuel for his base like “lock her up” and the Wall and feeds his case to delegitimize the 2020 election should he lose.

John Schindler writing for The Observer underscores the risk of war being fueled by Sec. State Mike Pompeo and national security adviser John Bolton. Trump and Bolton have “never been shy about their loathing of Iran’s revolutionary regime” and have openly called for regime change as their desired outcome with Iran.

From Axios we have:

“The bottom line: An Israeli official told me Mossad drew several scenarios for what the Iranians might be planning:

“It is still unclear to us what the Iranians are trying to do and how they are planning to do it, but it is clear to us that the Iranian temperature is on the rise as a result of the growing U.S. pressure campaign against them, and they are considering retaliating against U.S. interests in the Gulf.“

To add to the risk, consider that Israeli Prime Minister Benjamin Netanyahu is the source of the dodgy “might be” intelligence against Iran and has been a proponent of military confrontation for many years. Here’s Netanyahu’s contribution to dog-wagging:

“This morning, on my way here, I heard that Iran intends to pursue its nuclear program,” Netanyahu said in a speech marking Israel’s Memorial Day. “We will not allow Iran to achieve nuclear weaponry. We will continue to fight those who would kill us.”

There are several Trump battles to obstruct against oversight, but we now have the New York Times acquisition of Trump tax information from 1985 to 1994. Remember, the New York Times already disclosed that Trump is not the self-made man of his own mythology given his vast inheritance from his father, that he commits financial fraud by overstating the value of properties for bank loans, commits tax fraud by understating the value of the same properties for tax reasons, for which is sister stepped down as federal judge to avoid investigation, but now shows that his ‘success’ is a lie.

Trump “lost so much money that he was able to avoid paying income taxes for eight out of the 10 years”.

Battle Royale – Obstruction for All

The battle over tax returns is heated with Trump Treasury Sec Steve Mnuchin announcing that he would not release Trump tax returns to the House. Mnuchin claims the request serves no “legislative purpose” but that is not how the law is written. Mnuchin may have had to rush his response so he could run off to meet with top Trump donors including “industry executives his agency is tasked with regulating”.

As mentioned previously, there is legislation in New York state that would provide access to Trump’s tax returns subject to passage in the Assembly where Dems hold a majority and signed into law by Gov. Cuomo (D-NY).

Other instances of obstruction, even more summarily – with Barr’s help — the White House has claimed executive privilege and will not release the House subpoenaed Mueller redactions. The House in turn moved to hold Trump’s lawyer Barr in contempt.

The best of the remaining open battles have to do with 1) Mueller appearing before Congress – bet on that one happening: and 2) former White House counsel Don McGahn advised House Judiciary that he would not comply with a subpoena to turn over documents. 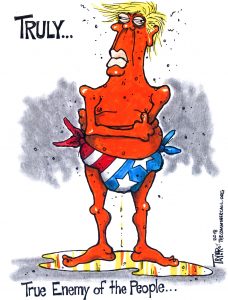 “DONALD TRUMP MAY BE ONE OF THE BIGGEST LOSERS IN AMERICA”

That Vanity Fair headline applies to the New York Times scoop of Trump tax information, but we’ll use it more broadly to summarize:

Pelosi gets the last word as she accuses Trump of “becoming self-impeachable”.