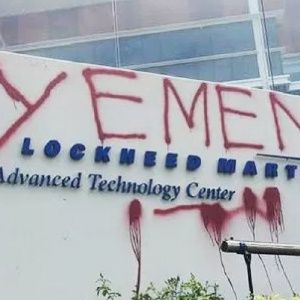 Bryce Druzin, a Palo Alto resident who has been following America’s involvement in Yemen’s civil war over the past few years, could not take it any longer. Dismayed by President Trump’s vetoing of bipartisan legislation to end U.S. involvement in the Yemen war, Druzin took it upon himself to do something about it.

According to San Jose Inside, 34-year-old Druzin spray-painted the word “Yemen” in blood-red letters over Lockheed Martin’s office sign, as a means to protest against the defense contractor’s weapon sales to Saudi Arabia. Lockheed Martin has profited massively from the ongoing war that Saudi Arabia wages in Yemen, and was the single-largest beneficiary of the $110 billion Saudi arms deal struck in 2017, according to Defense News.

Bryce Druzin wants the defense contractor, which has benefitted greatly from Saudi Arabia’s war in Yemen, out of his neighborhood.

Along with the words “Yemen,” Druzin also spray painted “8-9-18,” the date when the Saudi-led coalition dropped a 500-pound, laser-guided Lockheed-Martin bomb on a school bus in Yemen, killing 44 children.

Once he vandalized Lockheed Martin’s office in Palo Alto, Druzin called up the police and waited for officers to turn up and arrest him. He was charged with felony vandalism but released the next morning on his own recognizance. Druzin says that his only intention has been to draw attention to U.S. support for the war.

He said that the residents of Palo Alto, or any other community in the United States, should have no regard for a company which does not care for human lives.

“We should all be embarrassed.”

“I grew up in Palo Alto, and it’s just embarrassing to have this company in my hometown,” Druzin explained. “We should all be embarrassed. I mean, if we have a neighbor who helped kill tens of thousands of people, I wouldn’t want them in our neighborhood.”

Druzin is being hailed on social media for protesting against Lockheed Martin, a behemoth in the business of war. …