The summary letter the Department sent to Congress and released to the public late in the afternoon of March 24 did not fully capture the context, nature, and substance of this office’s work and conclusions.

You use his language, praise his leadership, tout his commitment to values.
And then you are lost. He has eaten your soul. 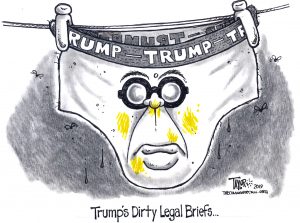 Today is a Trump-Russia award day. What happened you ask? This is all about the last 24 hours, starting with a leaked letter from special counsel Mueller and going through the Senate Judiciary Committee hearings today with AG Bill Barr.

A reminder, using a tighter standard than Trump’s nonsense about ‘exoneration’, I will restate, Trump is guilty of obstruction and guilty of a non-legal term that Trump and Barr love, guilty of collusion. For fairness, I’ll also offer the full-throated and less legitimate GOP claims in defense of Trump.

Maybe you’ve heard the expression, “it’s not the crime, it’s the cover-up.

Doing what he was hired to do

Barr did what he was supposed to do as Trump’s lawyer. Sadly, that’s not his job – he is the Attorney General for the United States, which means he is supposed to be there to benefit and protect us all.

Barr ignored Mueller’s summary and offered his own to benefit Trump – he cued up Trump to preemptively exclaim exoneration.

Barr’s summary was given three weeks ahead of the release of the Mueller report so the media and the public had only one thing to go on – Barr’s selective beneficial summary for Trump. Barr fed a feeding frenzy for some media to unload their “told you so” recriminations against some in government and some media. The GOP was given a three-week window to declare the end of the investigation: “See, nothing to see, folks, let’s move on, and let’s investigate those that brought about the investigation.”

And people like Kennedy defend the show with, ‘well you got the report didn’t you?’

Barr gave a press conference two hours ahead of the release of the Mueller report and repeated his lies feeding a story line of Trump exoneration.

Barr has shown great skill in equivocating and hiding behind legal process but Mueller’s letter called out his dark-side skills:

“There is now public confusion about critical aspects of the results of our investigation. This threatens to undermine a central purpose for which the Department appointed the Special Counsel: to assure full public confidence in the outcome of the investigations.”

Barr did the direct opposite of what he pledged to do during his confirmation hearings. He promised transparency and integrity but wound up delivering confusion and protected Trump.

It is so clear and so sad to see such partisanship, as The Washington Post Editorial Board called it: William Barr Torched His Reputation. His Testimony Compounded The Damage.

‘Mr. Barr defended himself Wednesday by insisting that his memo, publicized weeks before he released any additional material, was technically accurate, despite the fact that his spin deeply affected the reception of Mr. Mueller’s full report when the public finally got it. It was not supposed to be a full summary of the special counsel’s report, he insisted — just a brief explanation of the top-line conclusions. Mr. Barr’s long history in Washington belies his argument: He should have known how his pre-spinning of the Mueller report would distort the truth of the special counsel’s damning findings, to the president’s benefit. He did it anyway.”

The editorial ended with calling for accountability for both Trump and Barr. The rebuke was issued immediately on the conclusion of the hearings today (Wednesday May 1).

Former FBI Director James Comey was far more critical as demonstrated with the opening quote from his Tuesday (5/1)  New York Times opinion piece, posing a number of questions, such as these:

“How could Mr. Barr, a bright and accomplished lawyer, start channeling the president in using words like “no collusion” and F.B.I. “spying”? And downplaying acts of obstruction of justice as products of the president’s being “frustrated and angry,” something he would never say to justify the thousands of crimes prosecuted every day that are the product of frustration and anger?

But Comey ends with the most damning question:

“What happened to these people?”

It is the perfect question. MSNBC paused their live broadcast of the hearing so host Nicole Wallace could opine on Committee Chair Lindsey Graham (R-SC):

“Reveals what I talked about before, that he is sitting not as the chairman of the Judiciary Committee, but a human shield for Donald Trump and, it would appear, William Barr.”

RawStory is damning of Barr, Graham et al, just slide over to the front page (5/1). Read about how Barr had no answer when asked about political campaign obligation to notify the FBI if offered advantage from a foreign adversary. Or go to this round-up and take a look at how Barr pedaled away from Sen. Amy Klobuchar’s (D-MN) cornering him on specific examples of obstruction: Here Are 6 Jaw-Dropping Moments From Today’s Grilling Of Bill Barr On Mueller Probe.

It would make for hours of entertainment if it wasn’t validation of former republican campaign strategist Rick Wilson’s, “everything Trump touches dies”. Sadly, what may die along with Trump is the integrity of government and any action to protect our elections. And Kudos again to Klobuchar for her insistence on that point.

One final note – on Tuesday evening Barr notified the House Judiciary Committee Chair Jerrold Nadler (D-NY) that he will not show for his scheduled appearance tomorrow.