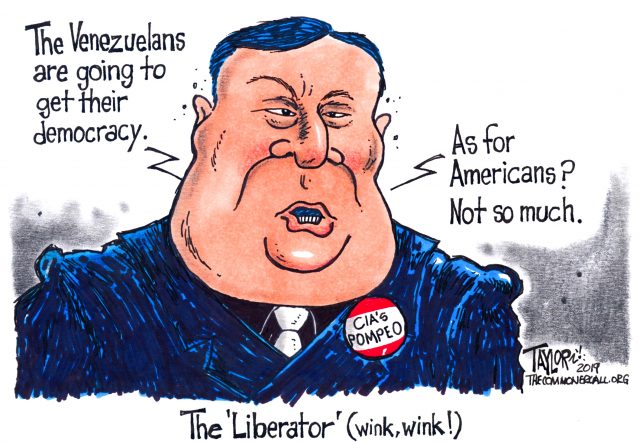 Over the course of my dusty television career, I have from time to time run into situations where a certain Hollywood celebrity type will make a threat—not to do interviews or make public appearances on behalf of a show, for example—unless some egregious demand of his or hers is met.

It’s a trap. Even if you meet their demand, my experience has been that they still won’t do what you request, nor did they ever intend to, no matter how much kowtowing you do. The mean ones get a noxious thrill from their ability to manipulate and diminish others.

So Congress, have you met Donald Trump? By now, you of all legislative bodies should know that nothing you do or say makes much difference to him, that whatever he will or won’t do is based not on policy or philosophy or your stated preferences but on whim, ego and a feral sense of self-preservation.

Thus we have our own celebrity brat-in-chief, a thuggish tot whose response to every attempt to uphold the Constitution and to maintain the balance of power among the three equal branches of government is a childish but deeply dangerous, “I don’t wanna.”

Sent subpoenas for documents and witnesses, Trump replies, ”We’re fighting all the subpoenas” (I don’t wanna). Ordered by law to release his tax returns, the president claims he’s still under audit and by the way, no (I don’t wanna).  Letters requesting the congressional testimony of such administration officials as Treasury Secretary Steve Mnuchin and immigration troll Stephen Miller, forget about it (I don’t wanna).

Democratic members of the House, don’t be intimidated. With an impeachment vote, you make your Republican colleagues go on the record as to whether they support this venal president, whether their fear of him and concern for reelection, not to mention their access to wealthy donors and lavish perks, is greater than love of country and democracy.

That there should be checks and balances in government chafes Trump. He’s a control freak who brooks no criticism and wants total dictatorial power.  “Trump is not inventing executive intransigence out of whole cloth,” Heidi Kitrosser, author of “Reclaiming Accountability: Transparency, Executive Power, and the U.S. Constitution” told Jonathan Allen at NBC News. “At the same time, this is not same-old, same-old. He is taking longstanding pathologies in terms of an increasingly imperial executive branch and ratcheting it up many times over.”

What’s more, his party is letting him move ever closer to such authoritarianism with barely a whisper of opposition. “Trump’s brazenness is the natural result of his party’s refusal to defend the rule of law,” conservative columnist Jennifer Rubin writes at the Washington Post. “They indulge him, his conduct gets worse and the cycle repeats.”

Impeachment by the House won’t actually do it—unless convicted by the Senate, the president stays in place—but the impeachment process itself has much to recommend it, even more so than various, extended congressional investigations of his assorted frauds and betrayals of country.

I have thought about this a lot and weighed the pros and cons. For one thing, impeachment has a nice ring to it. I mean it. Impeachment is a solid concept, endowed to us by the Founders because they knew that there would come times between elections when the president had to be punished or even removed, and it creates a convenient umbrella for all the ongoing congressional inquiries coming together as one. The process dramatically will point a spotlight and provide a great public education on this administration’s corruption and mendacity.

As we now know from the redacted Mueller report, there is more than enough evidence to impeach on obstruction of justice charges and even though the Mueller team did not find Trump and his team directly conspiring with Russia to meddle in our election they did absolutely nothing to discourage and indeed, welcomed what the report calls “sweeping and systematic” interference. Mueller has given Congress a 448-page roadmap to impeachment, and every action the Trump White House has taken since to stymie and vilify further inquiries is just further proof why impeachment’s necessary.

Andrew Cohen, fellow at NYU’s Brennan Center for Justice, says it well. Trump and his team, he writes, are “going to continue to act this way until they are forced legally and politically to back down. But we can’t wait for the courts to sort it out, especially with the Supreme Court at its most conservative point in nearly a century. And it’s no answer to say that the presidential election of 2020 is the fairest way to resolve this problem. There are 640 days left of the Trump presidency (even if he is not re-elected next November) and each day without a reckoning for what Trump has done is an insult to the Constitution as we have known it. If the Democrats don’t at least hold impeachment hearings, they’ll be derelict in their duty.”

What do the polls really say?

Yes, I read the new Washington Post/ABC News poll that indicates only 37% of the people favor starting impeachment proceedings. But go back to June 1973, a year after the Watergate break-in and a month or so into the now famous Senate Watergate hearings (just as John Dean was about to tell the committee that he advised Nixon there existed “a cancer growing on the presidency”). At that point, per a Gallup poll at the time, only 19 percent of Americans sought Nixon’s impeachment; in other words, just half of those who favor it now. Within months, as hearings publicized Nixon’s wrongdoings and the Saturday Night Massacre appalled the public, that number had doubled.

The journalist Elizabeth Drew, now 83, witnessed the events of Watergate. So did I, albeit as a mere wisp of a lad; Watergate was a key part of my first television job. She wrote perceptively about those events in her book, Washington Journal, republished just a few years ago.

In the New York Times she now notes the decision to impeach “is both more difficult and consequential than the discussion of it suggests… But even if the Republican-controlled Senate doesn’t vote to remove Mr. Trump, a statement by the House that the president has abused his office is preferable to total silence from the Congress. The Republicans will have to face the charge that they protected someone they knew to be a dangerous man in the White House.”

Further, comparisons with the boomeranging 1998 impeachment of Bill Clinton are odious; his behavior with an intern and cruel, buffoonish attempts to cover it up were indeed deeply shameful but hardly dangerous to freedom and nothing next to the current president’s criminal subversion of democracy.

Democratic members of the House, don’t be intimidated. With an impeachment vote, you make your Republican colleagues go on the record as to whether they support this venal president, whether their fear of him and concern for reelection, not to mention their access to wealthy donors and lavish perks, is greater than love of country and democracy. Hold them accountable. Right now, the GOP is the party of overlook; Democrats must be the party of oversight.

Remember, too, that while you investigate you can propose legislation as well; such was the case during Nixon’s impeachment. Pursue Trump’s wrongdoing while at the same time offering alternative programs for health, education, jobs, immigration and infrastructure. You can be certain that Republicans will not.

Do as Elizabeth Warren is doing: campaign on such proposals as you continue to hold Trump’s feet to the fire. As Hillary Clinton and others have said we’re reasonably sure Congress and candidates can walk and chew gum at the same time. In this way, Norm Ornstein of the American Enterprise Institute (although urging careful inquiries first and extreme caution) writes, “… impeachment would look powerfully more like a logical and necessary step, less like a vindictive, partisan move.”

So stop dithering. Don’t forfeit your advantage by letting Trump’s bullying get into your head. Don’t be afraid. This is no time to go wobbly, as a certain British PM once admonished an American president. If you think that by going down the impeachment route, Trump will jump up and down screaming and rattle his prized clamoring base at you, you’re right, but trust me—like those Hollywood celebrity types I mentioned at the beginning, the ones who meanly make threats to manipulate and diminish—he’s going to do that no matter what you do or say or ask.