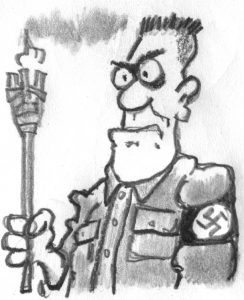 The people marching with tiki torches don’t end up being viewed as domestic terrorists.

Christopher Hasson’s alleged intentions were clear from the start.

Hasson, 49, a Coast Guard lieutenant, was arrested by federal agents in late February on gun and drug charges. But the guns alone weren’t the reason prosecutors were concerned.

Instead, they were troubled by the fact that Hasson had allegedly amassed an arsenal in preparation for a lone wolf attack inspired by the far right, and had compiled an alleged hit list of prominent Democrats and journalists, which included CNN’s Don Lemon, Sen. Elizabeth Warren (D-MA), and Rep. Alexandria Ocasio-Cortez (D-NY).

“The defendant intends to murder innocent civilians on a scale rarely seen in this country,” the detention motion read. “The defendant is a domestic terrorist, bent on committing acts dangerous to human life.”

“There’s a politicized agenda depending on the attacker.With a ‘non-jihad ist,’ for instance, the first conversation is about mental health, and it will usually stop there — no discussion about terror, radicalization.”

The Hasson case underscores two important points, the first of which was made clearer in the wake of a mass shooting in Christchurch, New Zealand, last week. First, far-right extremism is on the rise. And second, there’s little authorities can do to prosecute those extremists as “terrorists.”

Far-right responsible for all 2018 extremist murders in US

According the Anti-Defamation League, far-right extremists were responsible for every extremist-related murder in the United States in 2018, bar one. A November report by the Center for Strategic & International Studies noted that far-right terrorist attacks in the United States have increased from less than five per year between 2007 and 2011, to 31 in 2017. Europe has seen a similar resurgence, with security services in Sweden, Germany, and the U.K. all foiling separate plots over the last year alone.

This increase in far-right extremism, paired with a lack of terror charges, has exposed the gray areas within the U.S. legal system. While authorities have been amply equipped since 9/11 to deal with cases involving international terrorist groups, they lack the ability to prosecute right-wing extremists as domestic terrorists due to a loophole in existing laws. …

President Donald Trump is refusing to acknowledge the global rise of white nationalism in the wake of the hate-fueled New Zealand massacre that left 50 Muslim worshipers dead on Friday. Police have arrested and charged 28-year-old white supremacist Brenton Tarrant with the killings. Before the attacks, Tarrant published a manifesto in which he praised Trump as “a symbol of renewed white identity and common purpose” and described immigrants as “invaders.” On the same day, Trump claimed there was an “invasion” occurring on the southern border, signing his first presidential veto rejecting a resolution reversing his declaration of a national emergency on the U.S.-Mexico border.

We speak with Christian Picciolini, the founder of Free Radicals Project, a nonprofit helping people disengage from hate and violent extremism. He was a leading neo-Nazi skinhead and far-right extremist in the 1980s and ’90s. He is the author of “White American Youth: My Descent into America’s Most Violent Hate Movement—and How I Got Out.” We also speak with Khaled Beydoun, a law professor at the University of Arkansas and author of “American Islamophobia: Understanding the Roots and Rise of Fear.”

“President Trump’s words are going to have lasting implications for our democracy, for our children growing up, and for citizens now who are in fear of their lives, because we can’t even acknowledge that there’s a problem, let alone we’re not prepared to address it.”