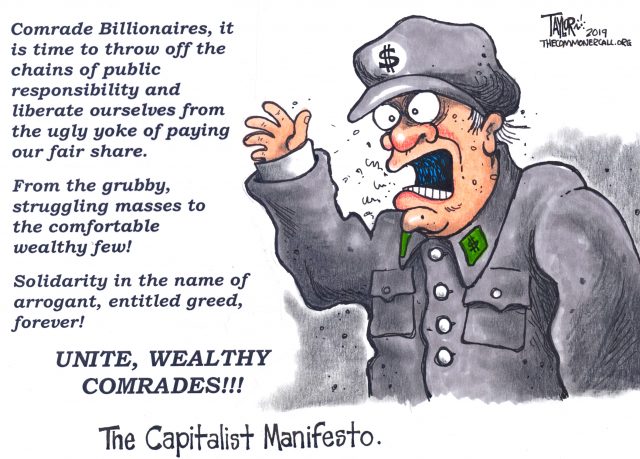 In his annual letter to shareholders, distributed last week, JPMorgan Chase CEO Jamie Dimon took aim at socialism, warning it would be “a disaster for our country,” because it produces “stagnation, corruption and often worse.”

Dimon should know. He was at the helm when JPMorgan received a $25bn socialist-like bailout in 2008, after it and other Wall Street banks almost tanked because of their reckless loans.

Dimon subsequently agreed to pay the government $13bn to settle charges that the bank overstated the quality of mortgages it was selling to investors in the run-up to the crisis. According to the Justice Department, JPMorgan acknowledged it had regularly and knowingly sold mortgages that should have never been sold. (Presumably this is where the “stagnation, corruption and often worse” comes in.)

The $13bn penalty was chicken feed to the biggest bank on Wall Street, whose profits last year alone amounted to $35bn. Besides, JPMorgan was able to deduct around $11bn of the settlement costs from its taxable income.

To state it another way, Dimon and other Wall Street CEOs helped trigger the 2008 financial crisis when the dangerous and irresponsible loans their banks were peddling – on which they made big money – finally went bust. But instead of letting the market punish the banks (which is what capitalism is supposed to do) the government bailed them out and eventually levied paltry fines which the banks treated as the cost of doing business.

If this isn’t socialism, what is it?

Call it socialism for rich bankers.

It’s a gift that keeps giving. Dimon took advantage of the financial crisis to acquire Bear Stearns and Washington Mutual, vastly enlarging JPMorgan. America’s five biggest banks, including Dimon’s, now control 46% of all deposits, up from 12% in the early 1990s.

And because they’re so big, Dimon’s and other big Wall Street banks are now considered “too big to fail”. …