Two months ago, Paul Lara saw a letter from his doctor to his insurance company. He recalls looking at the bottom of the page, next to the doctor’s signature, “It says: Does this patient have cancer? He marked yes.”

Only one problem: Paul Lara has never had cancer.

After decades as a commercial fisherman in Texas, Lara was badly injured on the job. In 2013, his doctor prescribed a high dose of an opioid called Subsys for Lara’s back and neck pain. The fentanyl-based spray can be up to 100 times stronger than morphine.

Recently, Lara learned the medication is only approved by the Food and Drug Administration for cancer patients who have severe pain despite being on around-the-clock painkillers.

“I was shocked. I was really, really shocked,” Lara said.

Prosecutors claim Insys employees like one named Kimberly had one job: say whatever was necessary to get the medication covered, including fabricating a cancer diagnosis.

Federal prosecutors believe Paul Lara was a victim in a complex scheme by Arizona-based Insys Therapeutics to bribe doctors and lie to insurance companies.

In Boston’s federal courthouse, prosecutors spent two months calling witness and laying out their argument in the criminal case against Insys Therapeutics founder and onetime billionaire, John Kapoor, and four of his former employees. The defense could begin presenting its case Monday.

If convicted, the opioid entrepreneur could face up to 20 years behind bars. Kapoor and his co-defendants are accused of racketeering, a charge often applied to drug kingpins and mafia bosses.

The prosecutors claim Insys Therapeutics set up a phony “speakers program.” Often no one showed up for the lectures, but the doctors who gave the lectures were paid handsomely.

“But they wouldn’t get paid unless they were giving out medication, the Subsys medication,” said Paul Lara, who testified for the prosecution.

Some doctors made hundreds of thousands of dollars from being “speakers” and, the government alleges, one doctor even received a lap dance from a member of the Insys sales team.

For the drug company’s sales representatives, higher doses meant higher bonuses. The idea, the government says, was to get patients hooked on the opioid and coming back for more.

In 2015, two of the sales reps made a music video about ratcheting up a patient’s dose, a process called titration … 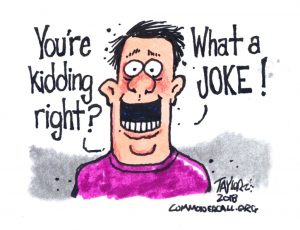 Hours after Purdue Pharma agreed to pay a $270 million settlement to the state of Oklahoma in a lawsuit that accuses the company of fueling a nationwide opioid crisis, a family that has profited immensely from this epidemic sent a sternly worded warning to HuffPost.

An attorney at Farrer & Co., the high-powered U.K. law firm that also represents the British royal family, emailed a “legal warning notice” to HuffPost on behalf of the British and American descendants of the late Mortimer Sackler, members of the family that owns the scandal-plagued drug company. British libel laws are stricter than those in the U.S., exposing reporters to a higher risk of lawsuits.

In his letter, attorney Julian Pike set forth guidelines on how he believes newsrooms should cover the mounting lawsuits against Purdue, which is based in Stamford, Connecticut.

“The public interest is in fact undermined and ill-served when the reporting on the subject is false, distorted and/or misleading,” Pike said, alleging “substantial amounts of coverage which has contained significant misleading or inaccurate claims” about the lawsuits and the epidemic more broadly.

The letter was sent in an email warning that the contents are “STRICTLY PRIVATE & CONFIDENTIAL / NOT FOR PUBLICATION,” but HuffPost did not agree to withhold it and is under no legal obligation to refrain from publishing under these circumstances. …

Read the Rest and Copy of Sackler Letter to Media

If there’s anything Donald Trump hates more than globalist trade deals that restrict U.S. sovereignty, it’s the exorbitant cost of pharmaceuticals in this country.

“The next major priority for me, and for all of us, should be to lower the cost of health care and prescription drugs,” the president said in his most recent State of the Union Address. “It is unacceptable that Americans pay vastly more than people in other countries for the exact same drugs, often made in the exact same place.”

And yet, the president’s new version of NAFTA — the uncreatively named United States-Mexico-Canada Agreement (USMCA) — actually forbids the U.S. Congress from curtailing Big Pharma’s patent monopolies on some of the world’s most expensive drugs. In other words: Trump’s “America First” trade deal restricts U.S. sovereignty, for the sake of locking in high drug prices.

In the U.S. today, drug companies that produce new “biologics” — specialty drugs made with living cells — are provided 12 years of immunity from generic competition. This awards such firms monopolistic pricing power over their (often life-saving) medicines for more than a decade after their wares hit the market. The rationale for this policy is that companies will not invest in high-cost biologic research if they aren’t guaranteed windfall profits for their innovations. But even if one accepts this (tendentious) premise, a 12-year monopoly appears both arbitrary and excessive. In Mexico, biologic makers are only immunized against competition from so-called “biosimilars” for five years; in Canada, such protections last eight. Congressional Democrats have drafted legislation that would cut the duration of biologic monopolies down to seven years.

But if Trump’s revised version of NAFTA takes effect, Democrats will not have the legal authority to advance that legislation — because the USMCA guarantees biologic makers at least a ten-year monopoly on their new drugs across all three of North America’s major economies.