How nice to see a democrat with a spine!

“This is not an elitist issue; this is a quality-of-life issue. You want to tell people that their concern and their desire for clean air and clean water is elitist? Tell that to the kids in the South Bronx, which are suffering from the highest rates of childhood asthma in the country. Tell that to the families in Flint, whose kids have—their blood is ascending in lead levels. Their brains are damaged for the rest of their lives. Call them elitist. You’re telling them that those kids are trying to get on a plane to Davos? People are dying. They are dying.”

Ocasio-Cortez Tells Small Donors To Cut Off DCCC Donations, Give Directly to Candidates Instead 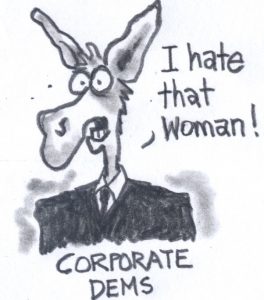 Denouncing the Democratic Congressional Campaign Committee’s new policy of cutting off firms that work with primary challengers as “divisive” and “harmful,” Rep. Alexandria Ocasio-Cortez on Saturday advised small-dollar donors to stop giving money to the DCCC and instead donate to progressive candidates directly.

“The DCCC’s new rule to blacklist + boycott anyone who does business with primary challengers is extremely divisive and harmful to the party,” tweeted the congresswoman from New York. “My recommendation, if you’re a small-dollar donor: pause your donations to DCCC and give directly to swing candidates instead.”

The New York congresswoman’s call for small-dollar donors to “pause” donations to the DCCC comes amid a growing progressive revolt against the campaign arm’s new policy, which states that the organization “will not conduct business with, nor recommend to any of its targeted campaigns, any consultant that works with an opponent of a sitting member of the House Democratic Caucus.”

“The lesson of 2018 is that our party is made stronger by the inclusion of diverse, disruptive candidates and vendors who bring different perspectives and experiences.” — Rep. Ayanna Pressley (D-Mass.)

Progressives vowed to fight back against the rule, arguing it will disproportionately harm left-wing organizations looking to transform the party by ousting conservative Democrats.

As Common Dreams reported last week, leaders of the Congressional Progressive Caucus met with DCCC chair Cheri Bustos (D-Ill.) to slam the policy and call for a change.

Rep. Ro Khanna (D-Calif.) called the DCCC’s rule “a slap in the face of Democratic voters across the nation.”

In a series of tweets on Saturday, Rep. Ayanna Pressley (D-Mass.), who reached the House after a primary victory, warned that the DCCC’s rule risks “undermining an entire universe of potential candidates and vendors—especially women and people of color—whose ideas, energy, and innovation need a place in our party.”

“I believe fiercely in the potential of our party, but we cannot credibly lay claim to prioritizing diversity and inclusion when institutions like the DCCC implement policies that threaten to silence new voices and historically marginalized communities,” Pressley added. “The lesson of 2018 is that our party is made stronger by the inclusion of diverse, disruptive candidates and vendors who bring different perspectives and experiences.”

Corporate Dem Swamp Monster Attacks Progressives, Who Don’t Back Down

“THE LEADERSHIP OF the Congressional Progressive Caucus has met with the top brass at the Democratic Congressional Campaign Committee and pushed back hard against a new party policy to blacklist consultants who work with primary challengers.

Rep. Ro Khanna, D-Calif., vice chair of the caucus, was also in the meeting with Rep. Cheri Bustos, D-Ill., and said that the turn the DCCC has taken in the 2020 cycle under her reign is worse on a small-d democratic level than previous cycles, when the party was not exactly kind to challengers.

“Pramila Jayapal, Mark Pocan, and I met with Cheri Bustos to make it clear that we strongly oppose her new policy that stifles competition and blackballs any consultant who works for a challenger. We made the point to Cheri that Nancy Pelosi, and Ben Ray Luján never adopted such a heavy-handed policy,” Khanna told The Intercept in a statement. “Ben Ray Luján in particular had a much kinder and more inclusive approach.”

Link to Story and 19-Minute Video

(Commoner Call cartoon by Mark L. Taylor, 2019. Open source and free for non-derivative use with link to www.thecommoercall.org )