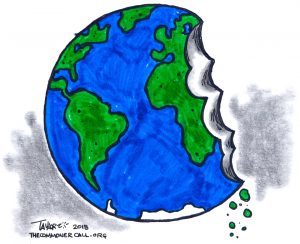 Animal populations have declined by 60 percent since 1970, driven by human actions, according to a recent World Wildlife Fund study.

Nature is in freefall and the planet’s support systems are so stretched that we face widespread species extinctions and mass human migration unless urgent action is taken. That’s the warning hundreds of scientists are preparing to give, and it’s stark.

The last year has seen a slew of brutal and terrifying warnings about the threat climate change poses to life. Far less talked about but just as dangerous, if not more so, is the rapid decline of the natural world. The felling of forests, the over-exploitation of seas and soils, and the pollution of air and water are together driving the living world to the brink, according to a huge three-year, U.N.-backed landmark study to be published in May.

“We are at a crossroads. The historic and current degradation and destruction of nature undermine human well-being for current and countless future generations.”

The study from the Intergovernmental Science-Policy Platform On Biodiversity and Ecosystem Services (IPBES), expected to run to over 8,000 pages, is being compiled by more than 500 experts in 50 countries. It is the greatest attempt yet to assess the state of life on Earth and will show how tens of thousands of species are at high risk of extinction, how countries are using nature at a rate that far exceeds its ability to renew itself, and how nature’s ability to contribute food and fresh water to a growing human population is being compromised in every region on earth.

Nature underpins all economies with the “free” services it provides in the form of clean water, air and the pollination of all major human food crops by bees and insects. In the Americas, this is said to total more than $24 trillion a year. The pollination of crops globally by bees and other animals alone is worth up to $577 billion.

The final report will be handed to world leaders not just to help politicians, businesses and the public become more aware of the trends shaping life on Earth, but also to show them how to better protect nature. …