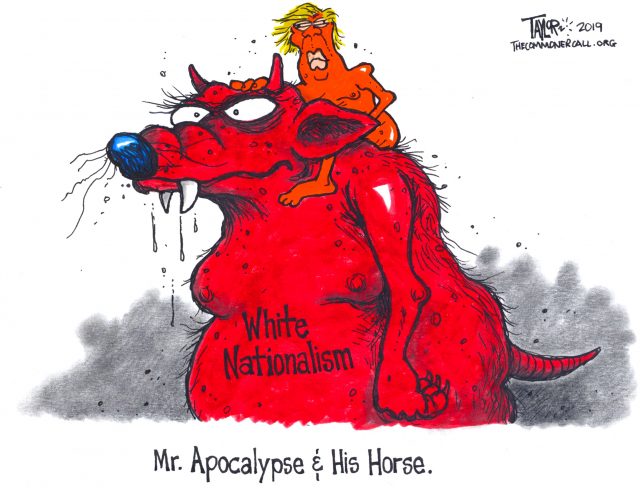 “A society becomes totalitarian when its structure becomes flagrantly artificial: that is, when its ruling class has lost its function but succeeds in clinging to power by force or fraud.”

— George Orwell, The Prevention of Literature

“President Trump issued a bizarre, indirect warning Monday that his supporters could get “tough” on his political enemies at a “certain point,” in a clip of a Breitbart interview spotted Thursday by The Toronto Star. “You know, the left plays a tougher game, it’s very funny,” the president told Breibart’s Matthew Boyle. “I actually think that the people on the right are tougher, but they don’t play it tougher. Okay? I can tell you I have the support of the police, the support of the military, the support of the Bikers for Trump–I have the tough people, but they don’t play it tough—until they go to a certain point, and then it would be very bad, very bad.”

Trump Is Cornered, With Violence On His Mind. We Must Be On Red Alert

As Trump becomes ever more entrapped in the web of his own misdeeds, his threats are becoming more ominous.

What does a megalomaniacal president of the United States do when he’s cornered? We’ll soon find out.

House Democrats are beginning a series of investigations and hearings about Donald Trump. Senate Republicans have begun to desert him. Twelve defected on the wall. Seven refused to back Saudi Arabia’s war in Yemen.

Almost all have gone on record that they want Robert Mueller’s report made public. That report, not incidentally, appears imminent.

So what does a cornered Trump do? For starters, he raises the specter of violence against his political opponents.

Throughout his campaign and presidency, Trump has given cover to some of the most vile bigots in America. As he grows more desperate, he is giving them encouragement.

In case you missed it, “they” are Trump’s political opponents, including House Democrats and the mainstream media. And the “certain point” could be impeachment but is more likely to be reached if the House investigations reveal crimes Trump committed both before and after he became president.

“I actually think that the people on the right are tougher,” Trump warned in the same interview. “But the left plays it cuter and tougher. Like with all the nonsense that they do in Congress … with all this invest[igations] – that’s all they want to do is – you know, they do things that are nasty.”

Here we have it, in a nutshell. In Trump’s mind, congressional investigations that could cause him shame and humiliation, and quite possibly result in a prison sentence, will be countered by forces loyal to him: the police, the military, and vigilante groups like Bikers for Trump.

To put it another way, the work of a democratically elected Congress will be met by Trump loyalists who, he asserts, are “tougher” because they have brute force on their side. …

“In the United States, law enforcement and civil rights group say they have seen an uptick in hate-motivated crimes. According to the FBI, the number has increased for a third consecutive year. Khizr Khan and Rabbi Chuck Diamond join Hardball for a discussion on the New Zealand attack.

How To Support & Donate To New Zealand Shooting Victims

You can help the victims of the New Zealand shooting. Cenk Uygur, Tommy Vietor, and John Iadarola, hosts of The Young Turks, break it down.