Convicted Trump former campaign chairman Paul Manafort went through a second sentencing hearing on Wednesday. At the age of 69, his total sentencing for convictions before two federal court judges will now run for an additional 7+ years, after allowances for time served and various calculations for consecutive versus concurrently. Much will be debated about the sentencing but if any part of Manafort felt good about the outcome — before he was even wheeled back to jail — this headline broke: Paul Manafort Tried To Send A Message To Trump. Manhattan’s DA May Have Rendered It Moot.

We’ll cover Manafort’s message for a pardon (1), but it may be moot; here is both the message and how a pardon may well be off the table (2):

(1) After Jackson’s sentence was imposed, Manafort’s attorney Kevin Downing spoke briefly to reporters outside the courthouse.

But here is why Downing’s plea to Trump may be moot (2):

“About the same time that Downing was speaking, though, another bit of news broke. Manhattan District Attorney Cyrus R. Vance Jr. announced that Manafort would be indicted on 16 statecounts related to alleged fraudulent activity related to mortgages Manafort held. And, if Manafort is convicted, there’s nothing Trump can do for his former campaign chief.”

That’s right, Manafort will be indicted by the Manhattan DA and a conviction would be far beyond the scope of a Trump pardon.

The battle of words over a potential pardon started in the courtroom:

“The ‘no collusion’ refrain that runs through the entire defense memorandum is unrelated to matters at hand,” Jackson said, adding: “The ‘no collusion’ mantra is simply a non-sequitur.” After all, she pointed out, the investigation isn’t over. It’s worth noting, too, that one hearing related to Manafort involved a lawyer for special counsel Robert S. Mueller III arguing that a particular meeting in which Manafort was involved got to “the heart” of Mueller’s investigation — which is centered on the question of coordination between the Trump campaign and Russia.”

But on the heels of the statement by the judge, Manafort’s lawyer Kevin Downing left the courtroom and immediately lied about the meaning behind the judge’s sentence:

Even that did not go well for Manafort, the assembled crowd yelled down Downing’s statement calling him a liar and Manafort a traitor. A protester yelled, “Liar, that’s not what she said”. Here’s a second link to a tweet that also carries the video and it’s worth viewing. 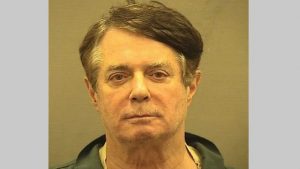 Manafort is not the only Trump crony manipulating to avoid jail, indicted long-time Trump associate and GOP operative Roger Stone filed an apology on Monday for misrepresentations related to his gag order in advance of his trial. A status hearing is scheduled for Thursday against a backdrop according to Stone of, “Recognize that the judge may issue a gag order any day now and while we will appeal it that could take a while.”

Who else could possibly be fretting about jail time? The HuffPost had a suggestion: Schiff: Trump’s Top Reason For Wanting A Second Term Might Be To Avoid Prison.

The sub-head explains the risk to Trump: “Individual 1” could face years in prison like his fixer Michael Cohen, but the statute of limitations for that crime would run out during a second White House term.

“I’m sure that it has occurred to the president that there is a prospect that he may be indicted when he leaves office,” said Schiff, a California Democrat who took control of the House Permanent Select Committee on Intelligence in January after his party picked up 40 seats in last year’s midterm elections. “And the longer he stays in office and if he is able to avoid the statute of limitations by remaining in office ― that that is a consideration that has not escaped him.”

Trump ran his campaign as a conservative populist building rapport with voters by telling us the system was rigged. On election day Trump trumpeted this:

“It’s largely a rigged system. And you see it at the polling booths, too,” Trump said, citing unverified “reports” that electronic machines switched Republican votes to Democratic votes.

Trump not only claimed the system was rigged but even earned the reverence of his supporters because he was an expert on how to use the rigged system to his advantage. The self-declared self-made man passed on the grift to his children. Self-declared self-made woman, daughter and senior Trump adviser Ivanka Trump has been credited by her father to have, “created millions of jobs”.

Even as we see headlines of, “Federal authorities on Tuesday charged 50 people… in an alleged scheme to win admission to prestigious universities for the children of wealthy parents” we learn that Ivanka’s husband and Trump senior adviser Jared Kushner got into Harvard by way of his father’s $2.5 million donation.

A truly libertarian family of self-declared self-made persons governing the United State, guided by an ideology of conservative populism.

Not working out as promised

And here’s the lesson we need to make sure we learn through this experience. Much like former President George W. Bush dispelled the notion of compassionate conservatism we see that: Brexit & Trumpism Have Failed Because Conservative Populism Is A Lie.

Trump and apologists theorize that we have evolved beyond fact and reason; we’ve reached an enlightened moment in time:

“Trump has declared, “I have a gut and my gut tells me more sometimes than anybody else’s brain can ever tell me.” Berkowitz (Hoover Institution senior fellow) restates Trump’s ethos more elegantly. “Conservatives have tended to recognize the unruliness of the passions and the limits of reason. They believe that recondite reflection and abstract theory tend to obscure practical matters; as a guide to politics, conservatives strongly prefer experience and practical wisdom,” he argues. “Burke (Sir Edmund Burke) allied with the people against ‘the political men of letters’ — the progressive public intellectuals of his day.””

“Apparently this innate distrust of elites is why conservatives should accept and even welcome a leader of the free world who has been described in the following terms by his own appointees: “Fucking moron” (Rex Tillerson), an “idiot” (John Kelly, John Dowd), a “dope” (H.R. McMaster), “dumb as shit” (Gary Cohn) with the comprehension level of “a fifth- or sixth-grader” (James Mattis), or “an 11-year-old-child” (Steve Bannon). A president with an attention span so miniscule his aides have to use large-type placards festooned with brief slogans and colorful graphics, it seems, is the worthy heir to Sir Edmund Burke himself.”

It’s fine to wear rebukes as badges of honor, but the price we may all pay for conservative populism is based on the threats like the proposed cuts to Medicare and Medicaid as an example. Even though Trump repeatedly pledged the opposite during the 2016 campaign.

Trump was to be “an authentic rebellion against the experts”, but we know it’s not working out as promised, we knew it was never meant to work out as promised. Will Trump finish his first term in office, will he win reelection, will he outlast the statute of limitations? Will we pay an extended price for his ongoing charade?

Maybe just like the Manhattan DA instantly pulled the rug out from under any Manafort illusion of a ‘win’, we have people ready to do the same with Trump, maybe Trump can’t run away from paying a price for selling us out:

“There’s already sufficient evidence to support an indictment of President Trump even before the conclusion of the special counsel investigation, California Rep. Adam Schiff said Tuesday.” 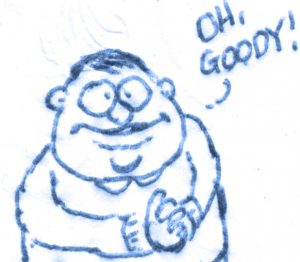 (Commoner Call cartoon by Mark L. Taylor, 2019. Open source and free for non-derivative for use with link to www.thecommonercall.org )