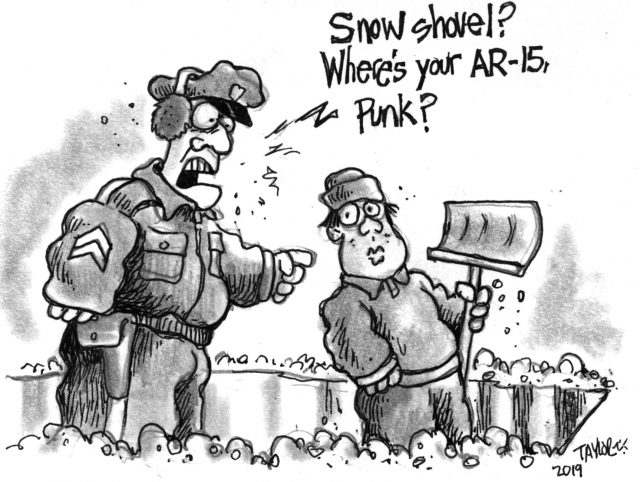 Hardworking Teen Harassed, Threatened By Cops For The Audacity Of Shoveling Snow From Grandma’s Driveway Without A Permit

Police Chief Michael Jannone noted that “We don’t make the laws but we have to uphold them.”

Normandy, MO — Residents in Normandy, Missouri are questioning a new ordinance they are calling ridiculous which requires anyone who wishes to shovel snow for money—to have a permit. To be clear, this is not just for adults running businesses, but as the following case illustrates, it’s being enforced against children trying to earn some extra money.

Charles Shelton and his foster son Keyshawn Anderson learned about the police state bureaucracy the hard was last week when Anderson tried to raise some extra cash by shoveling snow.

Shelton dropped the boy off at his grandma’s home in Pasadena Hills last week to shovel snow and once he started, the police quickly rolled in to check if Anderson had a permit. He did not, so he was shut down.

“I feel like there are other ordinances that are more important that should be addressed verses some young man shoveling snow,” said Shelton.

According to Anderson, he was approached by police twice for shoveling his grandma’s driveway without a permit.

When the officer came back the second time, Anderson was issued a warning, noting that if he attempted to shovel snow without scribbling on government paper again, he’d be extorted via a citation.

Naturally, police are claiming that the permits are there for public safety. They claim a video of two black youths ringing a doorbell with shovels in their hands is proof this town needs to be permitted.

Sgt. Tameika Sanders said residents allegedly called in over the weekend to report teens knocking on doors carrying shovels. She says—without any evidence of crime, mind you—that these teens were “casing” the homes by “pretending” to offer shoveling services.

Exactly how she knows they were pretending, when none of the residents actually hired them, remains a mystery. However, it is good enough to force aspiring entrepreneurs to fill out government paperwork before trying to earn an honest dollar.

Sadly, requiring children to obtain permits to move snow around with a shovel is a common practice in the land of the free. As TFTP previously reported, in Bound Brook, New Jersey, two 18-year-old boys were stopped by police during a snowstorm because they were offering to shovel their neighbors’ driveways. …
Read the Rest and 2-Minute Video
*****

Twenty sheriffs in Washington communities are refusing to enforce the state’s new limitations on assault-style weapons, The Guardian reports.

The law enforcement officers represent half of all sheriffs in the state. The new restrictions are part of Washington Initiative 1639, which was passed by about 60 percent of the popular vote last November, according to the Spokesman-Review.

Klickitat County Sheriff Bob Songer declared flatly to National Public Radio: “My plan is not to  enforce it.” He said he was so opposed to the law that he would consider preventing other agencies from enforcing it.

While it was passed overwhelmingly in urban areas, it’s opposed in several rural communities, revealing a deep divide in the state. The defiant sheriffs are mostly from rural counties. Only four sheriffs in the state so far have publicly committed to enforcing the new restrictions, according to The Guardian.

The law is hardly draconian. Purchasers of semi-automatic rifles must now be 21 or older, undergo an enhanced background check, take a safety course, and wait 10 days to take possession of their weapon after purchase. Gun owners who fail to store their weapons safely risk felony “community endangerment” charges.

Some rural county governments have passed resolutions opposing the state law, backing up their sheriffs.

Many sheriffs are opposed to the law because they believe it’s unconstitutional. …

Read the Rest and 23-Second Video