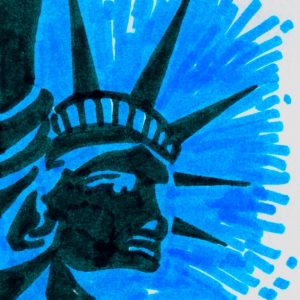 “Any institution that is run democratically takes a huge amount of work. All too often, what Americans mean by ‘freedom’ is ‘freedom from the burden of having to make decisions.'”

— Jason Stanley, author of “How Fascism Works: The Politics Of Us & Them” and “How Propaganda Works”.

At this point, I’d almost prefer that Donald Trump act on at least one of his tweet-threats instead of constantly hurling his rage-gasms into the void, keeping us all perpetually in a state of awkward panic. Observing Trump’s ongoing series of thirst-traps for dictators feels like leaning too far back in your chair and almost falling over but catching yourself at the last second — that sense of adrenalized gravitational panic seems to linger more and more between presidential outbursts as time wears on.

The only remaining question is whether he’ll actually take the next step following the threats. I choose to rule nothing out.

Along those lines, there’s a quiet debate in progress about whether we should continue to pay attention to Trump’s increasingly unhinged blurts and tweets. We’re each the boss of our own social media feed, so, sure, we retain the privilege to decide what we choose to care about. That being said, no matter how deeply the brain-worms burrow into Trump’s dwindling cerebrum, and no matter how worn down we might be, he’s still the president and his words matter. Yes, it’s a trap because he needs us to pay attention. Yet it remains true that good citizenship includes vigilance. Likewise, some of us who cover politics for a living have a responsibility to author the first draft of history. I want nothing more than for history to remember all of it, every episode of treachery and every damaging shriek. So I continue to pay attention.

If you’ve decided to ignore Trump’s public statements, then you probably missed a series of tweets last weekend in which the president threatened “retribution” against “Saturday Night Live” for being mean to him, followed by another tweet in which he hinted at jailing his investigators at the Department of Justice. Then he capped off the series with two tweets describing former acting FBI director Andrew McCabe’s discussions about invoking the 25th Amendment as a “coup” and “treason.” …

To Understand Trump, We Should Look To The Tyrants Of Ancient Rome

He looks like a strong man – the strongest. Holding a huge club to beat his enemies with, the Roman emperor Commodus wears a lion skin over his bearded, empty-looking face in a marble portrait bust made in the second century AD, which is one of the treasures of Rome’s Capitoline Museum. He is posing as the mythic hero Hercules, whose muscular might made him victorious in one spectacular fight after another. The portrait literally equates the strength of Hercules with the power of the emperor.

This is an idea Donald Trump might like. He surrounds himself with gold as lavishly as any tyrant. Why not commission a portrait of himself as Hercules for the Oval Office instead of just moving around busts of Winston Churchill and Martin Luther King?

His disdain for the norms of democracy makes it hard to understand the US president – but he has precedents in emperors such as Commodus, Nero and Tiberius.

The way the worst Roman emperors are portrayed in art can help us to see Trump more clearly. When we look at the face of Commodus in this eerie portrait, we are staring into the eyes of unhinged, utterly perverse tyranny. When this son of the respected emperor Marcus Aurelius took control of the vast Roman empire in AD161 he embarked on a career of bizarre folly and monstrous cruelty. As well as executing his enemies and perceived enemies, he liked to fight in the arena, killing gladiators with his own hands in a spectacle that educated Romans found shameful and disturbing.

Remind you of anyone? Donald Trump prefers to carry out his gladiatorial combats via Twitter. He hurls words instead of javelins. Give him four years, though, and who knows – perhaps he will be chasing Meryl Streep around the stadium in his chariot before the SuperBowl. …