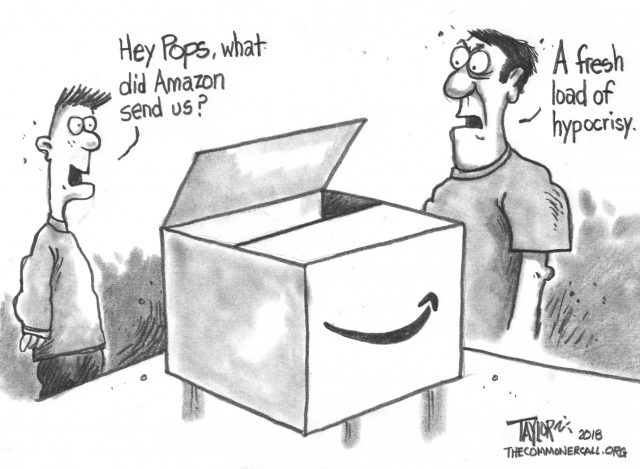 Amazon CEO Jeff Bezos is publicly accusing the owner of the National Enquirer of “extortion and blackmail,” weeks after the paper revealed details about his extramarital affair. Bezos had recently hired a private investigator to determine how the tabloid newspaper obtained private text messages between him and his lover, and whether the paper’s actions were politically motivated. The National Enquirer’s parent company, American Media, Inc., responded to Bezos’s investigation by threatening to publish revealing photos of Bezos if he did not agree to publicly state that the Enquirer’s coverage was not politically motivated or influenced by political forces.

We speak with Pulitzer Prize-winning journalist Glenn Greenwald about the dispute and Amazon’s role in building the surveillance state.

“The era of self-regulation for tech companies must end immediately.”

As U.K. lawmakers called for strict regulations “to curb the worst excesses of surveillance capitalism” following the release a damning report that details an investigation of Facebook, New Zealand’s Labour Party announced Monday it is pursuing tax reforms to require multinational tech giants “to pay their fair share.”

New Zealand Prime Minister Jacinda Ardern revealed the decision in a press conferencefollowing a cabinet meeting on Monday, tellingreporters that “our current tax system is not fair in the way it treats individual tax payers, and how it treats multinationals.”

“Highly digitalized companies, such as those offering social media networks, trading platforms, and online advertising, currently earn a significant income from New Zealand consumers without being liable for income tax. That is not fair, and we are determined to do something about it,” Finance Minister Grant Robertson said in a statement.

Revenue Minister Stuart Nash explained that the government is working with the Organization for Economic Cooperation and Development (OECD) “to find an internationally agreed solution for including the digital economy within tax frameworks.” However, he added, “we believe we need to move ahead with our own work so that we can proceed with our own form of a digital services tax, as an interim measure, until the OECD reaches agreement.”

The news out of New Zealand came as the U.K. Parliament’s Digital, Culture, Media, and Sport Committee put out a report outlining the results of an 18-month probe of “disinformation and fake news” on Facebook—which found that the company “intentionally and knowingly violated both data privacy and anti-competition laws,” as Tory MP and committee chairman Damian Collins summarized in a statement. …