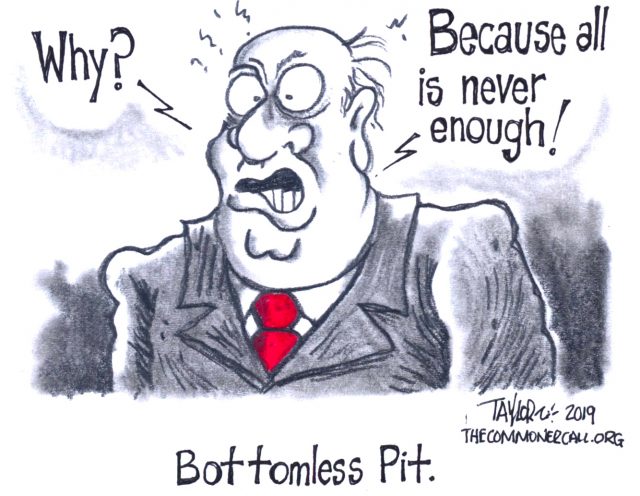 “This legislation is insulting to those millions of Americans who are struggling, it is harmful to the fabric of our democracy, and it is blatantly bad policy that is intended only to please ultra-wealthy Republican donors.”

Just over a year after the GOP rammed through its $1.5 trillion tax plan—which has predictably rewarded the ultra-rich while doing virtually nothing for workers—Senate Majority Leader Mitch McConnell (R-Ky.) and his Republican colleagues were condemned for pushing yet another “blatant giveaway to their wealthy donors” by introducing a bill on Monday that would permanently repeal the estate tax.

“Greed has no limit for the GOP,” declared Frank Clemente, executive director of Americans for Tax Fairness. “We need to reverse direction—not allow the GOP to hand the rich even more tax cuts.”

The deeply unpopular Republican tax law already significantly weakened the estate tax by doubling the exemption, allowing couples with up to $22 million to pass on their fortunes tax-free.

“Ending the estate tax would give a tax break of up to $63 billion to the Walton family and $39 billion to the Kochs—but $0 to 99.8% of Americans,” Sen. Bernie Sanders (I-Vt.) noted in a tweet on Tuesday. “At a time of record inequality, the very last thing we should do is line the pockets of the rich.”

“At a time of record inequality, the very last thing we should do is line the pockets of the rich.”
—Sen. Bernie Sanders

Making use of an extremely common and misleading right-wing talking point by officially titling their legislation the Death Tax Repeal Act of 2019, McConnell and fellow Republican senators presented their plan as an effort to provide relief to “hard-working families” and “family-run farms, ranches, and businesses.”

But progressive critics were quick to note that, in reality, the estate tax only affects a relatively tiny number of ultra-rich families, and that the overwhelming majority of Americans will see zero benefit from the Republican bill.

According to the Tax Policy Center, only around 1,700 of the country’s wealthiest families are expected to pay the estate tax each year under the GOP law.

“Who in the world could look at this country and think that giving more money to the heirs of multi-million dollar fortunes is our most urgent and pressing need? The estate tax affects less than 2,000 families each year, and even with the tax, those heirs are able to inherit over $22 million completely tax free,” Morris Pearl, chair of the Patriotic Millionaires, said in a statement. “Meanwhile, nearly 100 million Americans live in or near poverty, and 40 percent of working Americans make less than $15 an hour.”

“This legislation is insulting to those millions of Americans who are struggling, it is harmful to the fabric of our democracy, and it is blatantly bad policy that is intended only to please ultra-wealthy Republican donors.”

Warren Gunnels, policy director for Sen. Sanders, provided a short list of the families that would benefit most from the GOP plan to repeal the estate tax:

The Republicans’ latest push to lavish the wealthiest American families with tax breaks comes as progressive lawmakers are pushing ambitious plans to move the country in the opposite direction and reduce massive levels of income and wealth inequality.

As Common Dreams reported last week, Sen. Elizabeth Warren (D-Mass.)—who recently entered the 2020 presidential race—unveiled the “Ultra-Millionaire Tax,” which would impose an annual two percent wealth tax on Americans with over $50 million in assets. According to economists Emmanuel Saez and Gabriel Zucman, the tax would raise $2.75 trillion in revenue over ten years.

Additionally, Rep. Alexandria Ocasio-Cortez (D-N.Y.) earlier this month proposed hiking the top marginal tax rate on the ultra-rich to 70 percent—an idea economists have described as perfectly reasonable and right in line with where top tax rates were in the U.S. throughout most of the 20th century.

According to a survey conducted by The Hill and market research firm HarrisX earlier this month, 59 percent of the U.S. public supports raising the top marginal tax rate to 70 percent.

[Editor’s Note: Wow, this is a great podcast busting a bunch of republican and right wing myths about taxes. They have done a good job of making tax debate understandable and applicable to regular folks! — Mark L. Taylor]

Since forever, Republicans have insisted that cutting taxes on wealthy corporations and individuals would grow the economy, create jobs, and lift wages. But it never does. As an early architect of what became “Reaganomics,” Bruce Bartlett was there at the birth of this GOP tax myth. He joins the podcast to help set the record straight.

Bruce Bartlett: American historian who helped draft the Kemp-Roth tax bill that formed the basis of President Reagan’s 1981 tax cuts. Served as domestic policy adviser for Reagan, in the Treasury for George H.W. Bush, and in senior roles for other American politicians. Former Executive Director of the Joint Economic Committee of Congress.

Link to Story and 37-Minute Audio