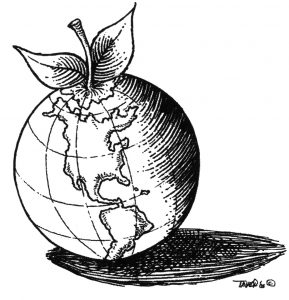 A new understanding, organically grown from the best of our American values that makes peace with our past errors, and joins the rest of world in being stewards of our planet is needed now.

The era of new frontiers to claim for an expanding American Manifest Destiny are long over. We live in a time where the exploitation of the eco-system is blowing back in a climate crisis teetering past the tipping points of repair. The Military Industrial Complex we were so clearly warned about 50 years ago has run amok, and placed our troops in 160 countries around the world, with fighting fronts of endless war in at least eight countries today.

Most Americans don’t label this engagement an attempt to control an Empire, but that is exactly what it is. The myth of the noble, isolated, Americans coming to the rescue carrying banners of democracy to the oppressed people of the world ignores the work of the corporate state to extract natural resources and exploit those peoples in the first place, and our acquiescence to the use of our military to maintain that profitable work indicts us all as co-conspirators.

Redefining the language of economics & politics

So effective is the propaganda of the American mythos, and so imprisoning of the soul is the doomed materialism of our economic system, we must now make an effort to redefine the very language of economics and politics for this discussion to have any useful meaning.

We need to define a political/economic system that can quickly develop a sense of preserving the eco-system, and meet the basic needs of all the peoples of the earth without resorting to war and totalitarianism. True democracy requires an economic system that allows it to flourish. Shortages of food, water, shelter, and basic human needs anywhere on the planet can not be tolerated. The planet has resources enough for everyone, and all other species. As the recent UN report points out, our duty — our only hope — is to establish sustainability in this decade.

We need to create a New American Democratic Socialism that has clear understandings of the socialist traditions of the past, and has its eyes on transforming our society into one that recognizes today’s impact on the future. We need the Democracy to control the economy; not the other way around. We need the failures of similar efforts in the past to be discussed, and the jargon of previous movements to be updated. No “dictatorship of the proletariat” can be imposed, no “vanguard” can lead, no “party discipline” can be more important than human (or species’) rights. A new understanding, organically grown from the best of our American values that makes peace with our past errors, and joins the rest of world in being stewards of our planet is needed now.

This is the first in a series of columns I hope can generate a discussion of what this all means, and how to proceed.

(Commoner Call art by Mark L. Taylor, 2016. Open source and free for non-derivative use with link to www.thecommonercall,org )