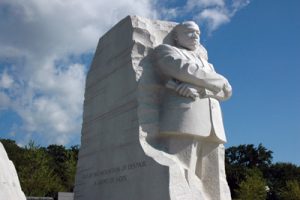 [Editor’s Note: The following letter came from a Commoner Call reader who asked for anonymity. The letter is appropriate to what this nation should stand for on this Martin Luther King Day. — Mark L. Taylor]

“Injustice anywhere is a threat to justice everywhere.”

I’m not going to say much but rather allow the videos below to speak for themselves. I woke up this morning to the NPR news at seven (sleeping in for me) and heard a story about boys from a Catholic school in Covington, Kentucky who were harassing some Native American singers/drummers. The boys were in Washington Saturday for a pro-life/antiabortion rally and the drummers were in Washington the same day to participate in the Indigenous Peoples March.

As a former Cub Scout leader, and Boy Scout Scoutmaster, and someone who endured my fair share of bullying as a schoolboy, it’s always been obvious that boys want to feel “a part of something.” Sadly, where families struggle, that’s one of the attractions to gangs in the intercity.  In Scouting we try to channel that into working together, and gaining leadership skills, and recognizing the good we can do in society. It comes at a challenging time in a boy’s life (9-through the teen years) where they are finding themselves.

All too often, as in this case, or the case of the high school kids from Baraboo, Wisconsin using the Nazi salute, individuals, especially young impressionable boys/men, act inappropriately because they are backed up by “a mob” (insecure and seeking recognition/acceptance). Or, to a greater sense, today the political jingoism that has permeated our body politic and has made this public display more widely acceptable (hate has always been with us but it isn’t always socially acceptable to be on display).

I doubt if that sweet looking kid, that got right in the face of elder Nathan Phillips, is truly evil. But if he is, he sure as hell wasn’t born that way.