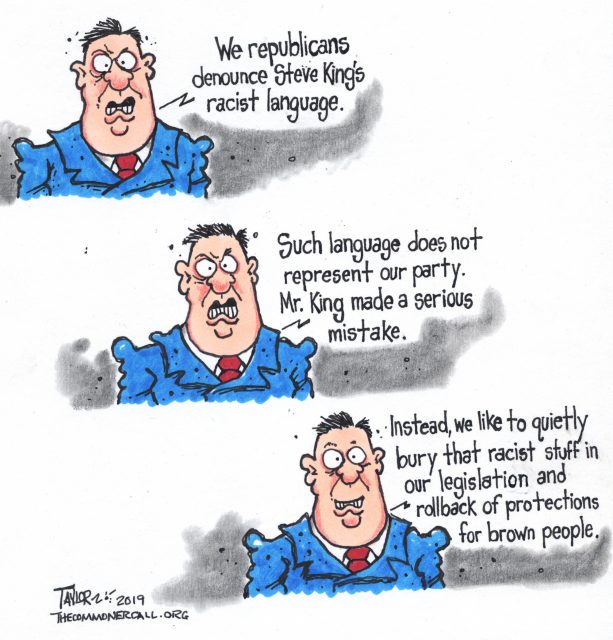 An all-too rare moment of truth.

Rep. Steve King (R-Iowa) issued a defiant statement Monday night after House Republican leadership decided to strip King of his committee assignments following the release of an interview where the congressman questioned why terms like “white nationalist” and “white supremacist” were “offensive.”

King characterized the move as an “unprecedented assault on my freedom of speech,” and it makes sense that he would be somewhat mystified. For the better part of this decade, King has openly broadcast his racist and xenophobic views without consequence from the Republican leaders.

In September of last year, King met in Austria with members of a political party founded by a former Nazi SS officer and declared that “western civilization is on the decline” because minorities are supposedly replacing white Europeans.

In October, King endorsed a white nationalist to be mayor of Toronto. The candidate had previously participated in the “Unite the Right” rally in Charlottesville and had recommended a book that called for the “elimination of Jews.”

And in November, The Weekly Standard published an audio recording of King referring to immigrants as “dirt” on multiple occasions. The report prompted 140 organizations to sign a letter to then-House Speaker Paul Ryan (R-Wis.) and Republican Majority Leader Kevin McCarthy (R-Calif.) to censure King for his “anti-Semitic, anti-immigrant, racist” language.

Just to be clear, King’s rhetoric cannot be attributed to the rise of Trumpism, it goes back to well before Donald Trump’s entry into the 2016 presidential campaign. In August of 2013, King absurdly claimed that for every child of an illegal immigrant “who is valedictorian, there’s another 100 out there who weigh 130 pounds, and they’ve got calves the size of cantaloupes because they’re hauling 75 pounds of marijuana across the desert.”

Throughout all of these episodes, congressional Republican leaders did nothing and continued to allow King to serve on the House Judiciary Committee, the committee that’s responsible for immigration policy in America. So it’s been interesting watching Republicans, after all this time, pile on the anti-King bandwagon this week. …

After Career Full Of Racist Remarks, GOP Finally Gets Around To Punishing Rep. Steve King

The move by Republicans—who have a long history of championing the racist and xenophobic policies King also supports—comes just days after a New York Timesinterview was published in which King asked why terms like “white supremacy” and “white nationalism” are considered offensive. As punishment, King will no longer be allowed to serve on the House Judiciary or Agriculture committees.

As Rep. Alexandria Ocasio-Cortez (D-N.Y.) noted, “Freedom of speech does not mean freedom from consequences.”

Like other progressives, the New York Democrat expressed approval of King’s punishment, writing on Twitter that his removal from the committees will have far-reaching consequences for his career in the current Congress, and that his constituents will likely take note.

“King’s district should start working to replace him in 2020,” suggested Ocasio-Cortez. “Regardless of party, it’s not good for a district if their representative has such reprehensible views that they aren’t allowed to touch legislation with a 10 foot pole.”
Republican leaders also spoke out against King, with Senate Majority Leader Mitch McConnell (R-Ky.) suggesting the congressman find “another line of work.” But with King’s long history of open racism, some critics questioned why the GOP chose the present moment to finally distance itself from him.

Just months ago, King expressed similar sentiments to the comments he made to the Times, saying on a local radio show that the term “white nationalist” is used “as a derogatory term and they imply you are a racist.” He also shared his concern over the white supremacist “Great Replacement” conspiracy theory, suggesting migrants to Western Europe are plotting to make white people a minority.

Earlier in his career on Capitol Hill, King first introduced a proposal to make English the official language of the U.S. with the English Language Unity Act and sued the Iowa Secretary of State for posting election information in other languages. …

Sen. Lindsey Graham (R-SC) complained that conservatives consistently got poor grades on social justice issues — and a pair of civil rights activists shut him down.

The South Carolina Republican grilled Derrick Johnson, the president and CEO of the NAACP, after he testified that William Barr’s views on race and discrimination were “singularly disqualifying.”

“How much is about this administration, versus Mr. Barr?” Graham asked.

Johnson explained that it was difficult to separate President Donald Trump from his nominees, and Graham launched into a lengthy complaint about the NAACP’s scorecard for rating lawmakers.

“I disagree with your scorecard rating, that I’m not a racist and I certainly don’t know how to close this gap — I’d like to,” said Graham, who pointed out that his NAACP score was the highest among Republicans on the Senate Judiciary Committee, at 22 percent.

Johnson explained the organization, which he pointed out was nonpartisan, rated lawmakers on their voting to promote the NAACP’s agenda on racial justice, which is set by delegates from across the country.

“How many of them are Republicans?” Graham said.

Johnson said some of the group’s national board members were Republicans, but he said the NAACP didn’t track party affiliation of members.

“We don’t make partisan decisions, we make policy decisions, and it’s informed by members across the country,” Johnson said. “Some are Democrats, some are libertarians, some are Republicans.”

Graham still didn’t understand why Republicans earned such low marks on racial justice, and he suggested the NAACP was wrong, not GOP lawmakers. …