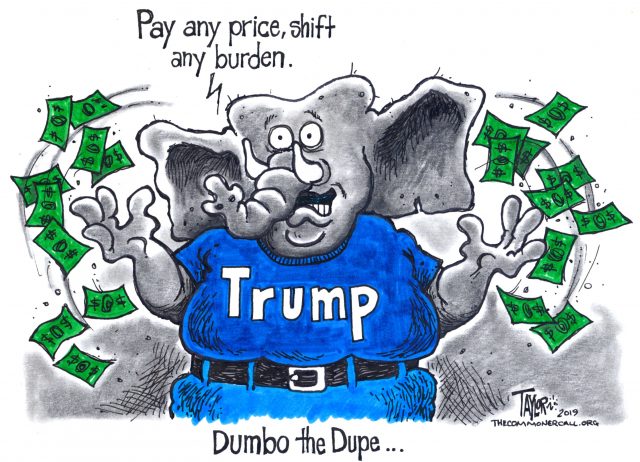 The President of the United states is saying if you don’t send him money, you’re not a patriotic American. And he’s taking names. Literally.

The Trump presidency has been little more than an extension of his presidential campaign, starting when he filed papers for re-election the day he was sworn in to office.

So perhaps it comes as no surprise that literally minutes after delivering his first primetime Oval Office address to the nation on what he labeled the “crisis” at the border, Trump was fundraising off his speech.

President George W. Bush addressed the nation from the Oval Office the night of the 9/11 terrorist attacks.

A primetime address from the Oval Office is generally reserved for the absolute, most important events in a president’s time in office. It is literally an attempt to place the weight and magnitude of the entire presidency in view of the American people, in order to convey the extreme magnitude of the President’s speech and the issue at hand.

President John F. Kennedy addressed the nation on the Cuban Missile Crisis from the Oval Office.

President Ronald Reagan spoke to comfort the nation from the Oval Office after the Challenger space shuttle disaster.

None of them fundraised off their speeches.

On Tuesday [1/8] night, about 15 minutes after President Trump finished his speech, likely thousands if not millions of supporters received a text asking them to “Donate to the Official Secure the Border Fund NOW.”

MSNBC‘s Joy Reid posted a screenshot of the text: [Follow link below.]

If that weren’t enough, Trump sent a fearmongering fundraising email, trashing Democratic leaders and urging supporters to donate half a million dollars by 9 PM, the time of his speech. The email was sent around 5:30 PM.

“Drugs are poisoning our loved ones,” it reads. “MS-13 gang members are threatening our safety.” “Illegal criminals are flooding our nation,” it warns.

“I want to make one thing clear to Chuck Schumer and Nancy Pelosi: Your safety is not a political game or a negotiation tactic!”

If these scare tactics weren’t enough, Trump used high-pressure tactics to eek every dime out of his supporters – many of whom are low income earners or retirees.

“I want to know who stood with me when it mattered most so I’ve asked my team to send me a list of EVERY AMERICAN PATRIOT who donates to the Official Secure the Border Fund,” the email reads.

In other words, the President of the United states is saying if you don’t send him money, you’re not a patriotic American. And he’s taking names. Literally.

“Please make a special contribution of $5 by 9 PM EST to our Official Secure the Border Fund to have your name sent to me after my speech.”

The Official Secure the Border Fund is not a fund that will actually secure the border. It’s just Trump’s re-election campaign fund. …

At the end of last year, shortly before the holidays and as the federal government was careening towards a partial shutdown, one of Donald Trump’s more enterprising supporters took it upon himself to fund the president’s vanity project along the U.S. -Mexico border.

Brian Kolfage, a longtime supporter of Donald Trump and conservative causes, launched a campaign on the crowdfunding platform GoFundMe to privately raise the $5.7 billion that Trump was hoping to get from U.S taxpayers to pay for his wall.

Within days, his campaign surpassed $10 million, as thousands of supporters blindly threw their money at the project, unperturbed by the fact that private citizens can’t just write a check to the U.S. Treasury to pay for government projects.

Conservative lawmakers in Congress took the reins, attempting to introduce legislation that would clear a path for a privately-funded wall. And the far-right media giddily watched as the dollar amount rose higher and higher, certain that the outpouring of support was evidence that the public approved of the president’s ambitious construction project.

Two weeks later, the campaign has hit a concrete wall.

Kolfage is one of the fringier stars in the constellation of far-right internet personas. A war veteran and triple amputee, he has managed to leverage his military service into a cottage industry of deceit and corruption. …