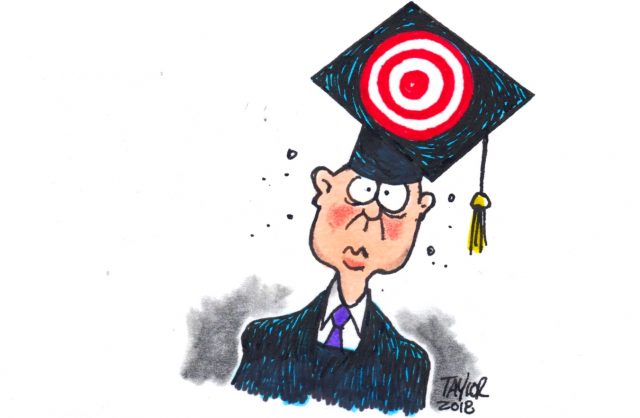 “Students who acquire large debts putting themselves through school are unlikely to think about changing society. When you trap people in a system of debt, the can’t afford time to think. Tuition fee increases are a ‘disciplinary technique,’ and, by the time students graduate, they are not only loaded with debt, but have also internalized the “discipline culture. This makes them efficient components of the consumer economy.”

— Quote from a 2011 news report in the Ottawa Citizen, which paraphrased statements Chomsky made during a lecture at Carleton University in Ottawa, Ontario, Canada.

I posted these thoughts of Chomsky the other day on my FB page. At the time they seemed to be saying something important about education. Reflecting further they are also saying something about human formation and the processes that shape our values and our way of looking at the world. Then as I’ve gone on thinking about it I have the uncomfortable feeling that his words are a warning that we are well on our way to losing any conception of education as humanising gift, social capital, cultural treasury, creative possibility for the future, imaginative empowerment of the minds, affections and commitments of the recent and coming generations of pupils and students.

“But training generations of our students to think of their education as purchased employability, rather than enabled humanity, is short-sighted and will have its own economic, social and ultimately political consequences.”

Trying to pinpoint the precise nature of unease isn’t easy. Education does have to be paid for by somebody. Schools and Universities are expensive places where learning is impossible to measure in the pounds it costs, saves or will ultimately make. Chomsky’s warnings ring with the alarm notes of a social prophet – trapped in debt, no time to think, thus unlikely, unable to think about chnaging society because of the burden of debt and the urge to earn. These two phrases “unable to afford the time to think” and “unlikely to think about changing society” are chilling outcomes of an educational process which requires the student to mortgage much more than large amounts of money. A burden of debt, and a sense of having been burdened, is deeply corrosive of social capital, and ultimately fatal to that altruism that springs from gratitude and instils a commitment to the common good.

An education bought at the price of long term debt, knowledge and know how purchased on a mortgage, a relentless focus on employability and the market as key drivers in educational aspiration, reduces education to commodity, pupil and student to customer, and having paid for my own education I am entitled to exploit it in the market place. When that happens what are the chances of intellectual energy focused on making life better, imaginative thinking towards new possibilities, creative and critical reflection on change and opportunities for others, and fundamental to each of these is, ironically, the feeling of indebtedness. A person’s fundamental attitude to the culture in which they have grown and been nourished, allowing for all the social inequalities and diversities of life chances, is defined largely by how that word is used.

If indebtedness means I have been supported through my education, and if I have been enabled and empowered by the processes of learning and formation and growing, then I am likely to be a net contributor to my community. …