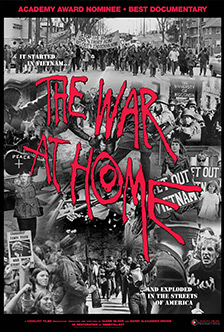 “This is Hometown. America in revolt … not to be missed.”
— Variety

The War at Home, a landmark documentary about antiwar protests in the 1960s and ’70s in Madison, Wisconsin, has just been re-released nationwide. In an extended interview, we revisit the film with co-director Glenn Silber, two-time Academy Award nominee, and discuss why he argues now is an important time to revisit the responsibility to stand up and say no to war.

“I think the Dow demonstration, at least in Madison, and probably elsewhere, is one of the most important demonstrations ever, because what was it? The university invited the makers of napalm, that horrible weapon of war, that really should have been outlawed, to begin with, as a crime, this gel that burns people to death. They invited them on the campus so they could recruit more future napalm makers.”