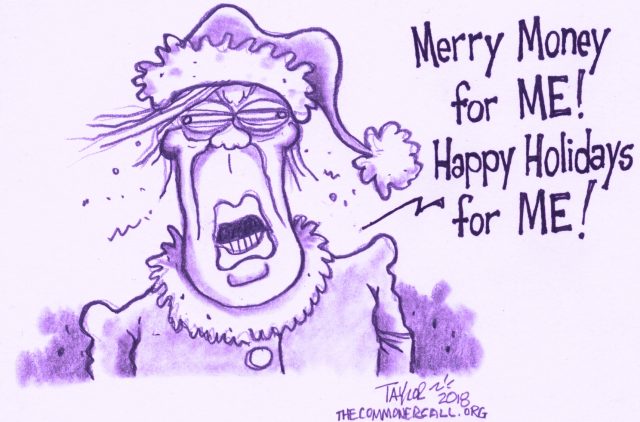 Tis The Season To Be …Hypocritical!

During Donald Trump’s presidential campaign he talked often about his determination to win one particular war. A war that had been raging for years, he said. Specifically: the war on Christmas.

But despite Trump’s repeated claims that “people are saying Merry Christmas again” instead of the more inclusive “happy holidays”, there are several places where the Christmas greeting is absent: Trump’s own businesses.

This week a visit to Trump Tower, Trump’s signature New York City erection, revealed that Christmas is not mentioned anywhere in the building’s public space.

The Trump Store, for example. Instead of a Christmas gift guide – which surely would be more in keeping with the president’s stated desire for the phrase to be used – the store offers a holiday gift guide.

“Shop our Holiday Gift Guide and find the perfect present for the enthusiast on your list,” the online store urges.

“Carefully curated to celebrate the most wonderful time of year with truly unique gifts found only at Trump Store. Add a bow on top with our custom gift wrapping. Happy Holiday’s!”

The use of the phrase “Happy Holiday’s” [sic] in Trump marketing would seem particularly egregious. The long-standing “War-on-Christmas” complaint from the political right is that stores use the phrase “Happy Holidays”, rather than specifically mentioning the Christian celebration. It is offered as both an example of political correctness gone mad, and as an effort to erase Christianity from the US. …