News media tell us that Beto O’Rourke has reached the top tier of potential contenders for the 2020 Democratic presidential nomination. CNN polls now rank him in third place — behind only Joe Biden and Bernie Sanders — among likely Iowa caucus-goers as well as among Democrats nationwide.

Progressives are apt to be enthusiastic about O’Rourke — if they don’t know much about his record.

Inclinations to hop on the Beto bandwagon are understandable. O’Rourke was inspiring this year as he fought to unseat the despicable U.S. senator Ted Cruz with a campaign that built a broad coalition of Texans while gaining huge small-dollar support from across the country. In late summer, many were thrilled by a video of Beto’s response to a question about NFL players kneeling in protest during the national anthem; his ringing defense of dissent in the context of civil rights history was excellent.

Cruz had to sweat it out on election night and won by only 2.6 percent, a slim margin in such a conservative state. Since then, publicity about Beto O’Rourke potentially running for president has mushroomed, with corporate news outlets portraying him as a progressive.

Released a week ago, the much-publicized results of a poll that MoveOn conducted of people on its email list found O’Rourke in first place, neck-and-neck with Joe Biden and Bernie Sanders. Media spin intensified, portraying Beto as a challenge to Bernie.

NBC News broke the news of the MoveOn poll while calling it “a potentially troubling indication for Sanders.” A couple of days later, The New York Times speculated that “Mr. Sanders’s hold on the party’s progressive base may be slipping as a new generation of Democrats like Representative Beto O’Rourke demonstrate early strength in polls and straw polls, such as the one conducted this week by the liberal group MoveOn.”

“O’Rourke’s message covers rhetorical territory familiar from the Obama era: It’s positive and innocuous, but noncommittal. It relies on lofty but meaningless phraseology like Shared Values, Finding Common Ground and Bringing People Together. The message describes itself with words like ‘ambitious’ and ‘bold,’ but doesn’t promote any specific policy that could actually be described as such.”

Meanwhile, Democracy for America was concluding a poll of its own active supporters online. As the second week of December began, the organization’s website was showing Bernie Sanders far ahead in the top spot at 38 percent, followed by Biden at 15 percent, O’Rourke at 12, Elizabeth Warren at 8, and Kamala Harris at 7. (DFA later removed the running totals from its site until release of final numbers.)

Given their at-times extreme antipathy toward Bernie during his first presidential run, mainstream news media are likely to have an appetite for a 2019 storyline that Sanders’s support is eroding. O’Rourke is apt to be quite useful for such a narrative. The Democratic Party establishment that went all-out to get Hillary Clinton the 2016 nomination is palpably eager to block Bernie. And some in that establishment are already indicating that they believe O’Rourke might do the trick.

A revealing sign came early this month from a leading sentinel of the Democratic Party’s corporate wing — the relentless Clinton loyalist Neera Tanden, president of the Center for American Progress. What set her off was a matter-of-fact tweet from investigative reporter David Sirota, who told people “Something I didn’t know: Beto O’Rourke is the #2 recipient of oil/gas industry campaign cash in the entire Congress.” Sirota provided a link to campaign finance data. 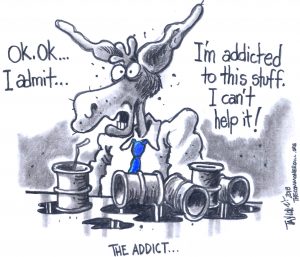 Tanden quickly went into onslaught overdrive with a tweet lashing out at the sharing of such information about the three-term congressman: “Oh look. A supporter of Bernie Sanders attacking a Democrat. This is seriously dangerous. We know Trump is in the White House and attacking Dems is doing Trump’s bidding. I hope Senator Sanders repudiates these attacks in 2019.”

A money-in-politics reporter, Alex Kotch, responded that he was “pretty shocked” to see Tanden attack Sirota for simply sending out a factual tweet: “Tanden, a close Clinton ally and Bernie Sanders foe, has had a contentious relationship with the left, with which Sirota is often associated. But her claim that a reporter’s tweet of campaign finance statistics about a potential 2020 candidate was a dangerous attack that Trump would have ordered? Who was really being attacked here?”

For some context, Kotch added: “It’s worth noting that the Center for American Progress has in the past accepted donations from multiple fossil fuel companies and, as of 2017, was still receiving money from Pacific Gas and Electric Company. During the 2016 Democratic Platform Committee’s drafting process, Tanden voted against a fracking ban, a carbon tax, and a measure to keep fossil fuels in the ground.”

Kotch followed up on Dec. 12 by reporting: “I have confirmed that according to the latest campaign finance report, which covers the period from Oct. 17 through Nov. 26, the O’Rourke campaign had not returned 29 ‘large donations’ of over $200 from oil and gas executives, violating the No Fossil Fuel Money pledge O’Rourke signed.”

Beto O’Rourke’s actual political record deserves scrutiny, and it’s not what progressives might expect from the overheated adulation that has sent his presidential balloon aloft. Some pointed reporting and critiques this month may have begun a process of bringing Beto fantasies down to earth. For instance:

As candidates and in office, the last two Democratic presidents have been young, dynamic and often progressive-sounding, while largely serving the interests of Wall Street, big banks, military contractors and the like. Do we need to make it three in a row?

Beto O’Rourke’s spirited run for the US Senate in Texas last month has prompted powerful voices in the Democratic party establishment to tout the outgoing Texas congressman as a 2020 presidential candidate who, as the party’s standard-bearer, would offer a vision of America contrasting against that of Republicans.

However, a new analysis of congressional votes from the non-profit news organisation Capital & Main shows that even as O’Rourke represented one of the most solidly Democratic congressional districts in the United States, he has frequently voted against the majority of House Democrats in support of Republican bills and Trump administration priorities.

Capital & Main reviewed the 167 votes O’Rourke has cast in the House in opposition to the majority of his own party during his six-year tenure in Congress. Many of those votes were not progressive dissents alongside other left-leaning lawmakers, but instead votes to help pass Republican-sponsored legislation.

In recent weeks, the possibility of an O’Rourke presidential candidacy has been boosted by former Obama aides and fundraisers, as well as by Third Way – a finance-industry funded thinktank that previously made headlines deriding Democratic senator Elizabeth Warren.

O’Rourke’s votes for Republican legislation – which at times put him at odds with a majority of Texas Democratic lawmakers in Congress – underscore his membership in the New Democrat Coalition, the faction of House Democrats most closely aligned with business interests.

O’Rourke did not respond to questions from Capital & Main about his votes. …