When it came out this year that President Donald Trump’s inaugural committee raised and spent unprecedented amounts, people wondered where all that money went.

It turns out one beneficiary was Trump himself.

The inauguration paid the Trump Organization for rooms, meals and event space at the company’s Washington hotel, according to interviews as well as internal emails and receipts reviewed by WNYC and ProPublica.

During the planning, Ivanka Trump, the president-elect’s eldest daughter and a senior executive with the Trump Organization, was involved in negotiating the price the hotel charged the 58th Presidential Inaugural Committee for venue rentals. A top inaugural planner emailed Ivanka and others at the company to “express my concern” that the hotel was overcharging for its event spaces, worrying of what would happen “when this is audited.”

How the inaugural committee managed to spend all the money it raised remains a mystery, nearly two years after the event. While groups that support political candidates or issues must publicly detail their spending, an inaugural committee is required to list only its top five contractors. That leaves about $40 million unaccounted for.

If the Trump hotel charged more than the going rate for the venues, it could violate tax law. The inaugural committee’s payments to the Trump Organization and Ivanka Trump’s role have not been previously reported or disclosed in public filings.

“The fact that the inaugural committee did business with the Trump Organization raises huge ethical questions about the potential for undue enrichment,” said Marcus Owens, the former head of the division of the Internal Revenue Service that oversees nonprofits.

Inaugural workers had other misgivings. Rick Gates, then the deputy to the chairman of the inaugural, asked some vendors to take payments directly from donors, rather than through the committee, according to two people with direct knowledge. The vendors felt the request was unusual and concerning, according to these people, who spoke on condition of anonymity because they signed confidentiality agreements. It is not clear whether any vendors took him up on his request.

The revelations about the inauguration’s finances show how Trump blurred the lines between his political and business lives, as the real estate mogul ascended to the presidency.

On Thursday, The Wall Street Journal reported that federal prosecutors in New York have opened a criminal investigation into whether the inaugural committee misspent money and whether donors gave in return for political favors, citing people familiar with the matter. In addition, The New York Timesreported that prosecutors are examining whether foreigners illegally funnelled money to the inauguration.

Peter Mirijanian, a spokesman for Ivanka Trump’s ethics lawyer, said: “When contacted by someone working on the inauguration, Ms. Trump passed the inquiry on to a hotel official and said only that any resulting discussions should be at a ‘fair market rate.’ Ms. Trump was not involved in any additional discussions.”

Mirijanian did not provide evidence that Ivanka Trump sought a fair market rate.

A spokeswoman for the inaugural committee said it “is not aware of any pending investigations and has not been contacted by any prosecutors. We simply have no evidence the investigation exists.” The White House and a lawyer for Gates did not immediately respond to requests for comment. A spokesman for the Manhattan federal prosecutors’ office declined to comment. The Trump Organization did not comment.

“That doesn’t have anything to do with the president or the first lady,” White House press secretary Sarah Huckabee Sanders told reporters on Thursday night, when asked about the story in the Journal.

President-elect Trump was repeatedly briefed on inaugural planning and specific events, according to one committee worker with direct knowledge. WNYC and ProPublica have seen presentations that were shown to the president-elect, complete with renderings and floor plans. … 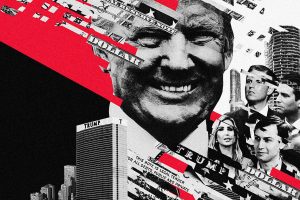