Given the non-stop horrible news for Trump over the last several days it seems that this observation applies directly to Trump and his family. There are many attempts to summarize and we’ll work with this one: Mounting Legal Threats Surround Trump As Nearly Every Organization He Has Led Is Under Investigation. 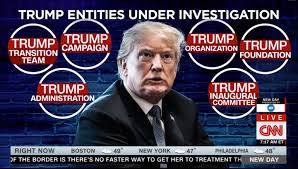 Two years after Donald Trump assumed the presidency, nearly every organization he has led in the past decade is under investigation.

The article is a series of links to fuller descriptions, we’ll simply list the links with a bit of description as needed:

A bit of update, the New York Times has a follow-on article to their news about Trump’s “dubious tax schemes”. It turns out that Trump tenants bore the brunt of Trump’s tax fraud in the form of increased rent payments – renter’s defrauded, all tax payer’s defrauded.

Let’s dive into the deep end. There is always a voice to discount Trump-Russia, as NPR says, “still unproven despite two years of investigations, court filings, and even numerous convictions and guilty pleas.” NPR reports: The Russia Investigations: A Case Still Unproven.

Trump is staying true to form with his continued efforts to cast doubt:

“The “biased” Justice Department is just grasping at straws to use something against Trump because it hasn’t been able to locate a “smocking gun,” as Trump wrote this week, that would tie his campaign in with Russia’s active measures in 2016.”

‘Smocking’ gun or not. We’ve consistently been of a mind that special counsel Mueller will be thorough and only then will we see a ‘smocking’ gun. To pick one example, much has been made of Cohen’s alleged role as the ‘money bag man’ with payment made for Russian hacking during a visit to Prague:

“Cohen ostensibly played a key role in the version of events told by the infamous, partly unverified Russia dossier. He denied that strongly to Congress. He also has admitted lying to Congress and submitted an important new version of other events.

“But that new story didn’t include a trip to Prague, as described in the dossier. Nor did Cohen discuss that in his interview on Friday on ABC News. Could the trip, or a trip, still be substantiated? Yes, maybe — but if it happened, would a man go to prison for three years without anyone having mentioned it?”

Let’s agree, there is not a smocking gun … as yet. At the same time, let’s: 1) reconsider the Steele Dossier, and; 2) challenge this notion that all aspects of Cohen’s agreement have now surfaced with his admission of guilt: The Steele Dossier: A Retrospective.

Lawfare just compiled a detailed comparison of the former British MI6 head of the Russia desk Christopher Steele and his famous dossier. Lawfare posed a question – whether after two years the Mueller investigation, “has tended to buttress or diminish the crux of Steele’s original reporting”.

It’s a worthwhile read opening with a dossier statement that Russia was behind the leak of DNC emails “to the Wikileaks platform” for “plausible deniability”. Special counsel Robert Mueller in turn has the “indictment of 12 officers of the Russian Main Intelligence Directorate of the General Staff (GRU) corroborates these allegations from Steele’s sources”.

The Lawfare review even touches on Cohen and Prague acknowledging that so far “current public official record does not affirmatively corroborate the assertion”.

Much like we only recently learned the dossier was correct and the Moscow Project was still being seriously discussed in June 2016, we also just learned this from a Cohen tape seized in the FBI raid that led to his pleading guilty. And with the story below, we’ll learn more about First Daughter Ivanka’s legal exposure from Cohen.

Mueller is not putting all his cards on the table in advance of making his case, and the media continues to validate the dossier.

Worth noting, Trump lawyer Giuliani now suggests the Moscow Tower conversation continued as late as November 2016, a technique Giuliani and Trump use when they know new revelations are on the way. 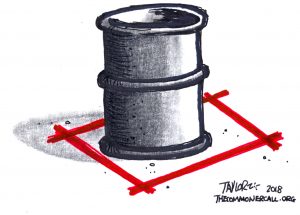 Ivanka’s turn in the barrel

“Reporters have uncovered a plot to funnel inauguration funds into Trump’s pockets by jacking up the rental rates at Trump’s DC Hotel during the event — and one of the President’s children was at the heart of it.

“Ivanka Trump acted as the middlewoman in an email exchange between the Inauguration Committee’s convicted Deputy Chairman Rick Gates and hotel staff that demanded a $175,000 daily rate for use of the Trump DC Hotel’s public spaces.”

The problem resulted from push-back from Melania Trump’s hand-picked event planner Stephani Winston Wolkoff who was paid $26 million (!) for running the inaugural events. Wolkoff expresssed her concern to Ivanka pushing back on pricing and offering “that when this is audited it will become public knowledge…”.

And here’s the link between the two points, “One of Wolkoff’s conversations with Michael Cohen about the inaugural committee’s spending even wound up in the recordings seized by the FBI when they raided the recently sentenced attorney’s office.”

That’s right – because of Cohen we now have news of Ivanka’s complicity in grifting around the inauguration events. Again, after Cohen’s sentencing.

It is more accurate to say – much of the Steele Dossier is verified, much is not verified but less so as new evidence comes forward even in advance of Mueller’s report.

You know what else we’re learning? A lot – so much so we’ll just drop in a set of headlines starting with the ProPublica article that broke the news about shenanigans with the inauguration fund and the use of the money: Trump’s Inauguration Paid Trump’s Company — With Ivanka In The Middle.

The Wall Street Journal refers to this as a “criminal investigation”, though the article is behind a pay wall.

More on this from CNBC pointing out that many of the sources for funds as well as the expenditures are not known:

The Trump Inaugural Committee’s Fundraising Was A Mess From The Start, But A New Investigation Could Finally Provide Come Answers.

Speaking of unknown sources of funds and an expansion in scope beyond Trump-Russia: Get Ready for Mueller’s Phase Two: The Middle East Connection.

The sub-head reads: The ‘Russia investigation’ is set to go global. In court filings due to drop in 2019, prosecutors will unveil Middle Eastern countries’ attempts to influence U.S. politics.

Apparently Trump’s wall would have a side entrance for his golf club employees.

Could Putin be ready to cut his little friend off?

But none of that rises to the importance of this news: Forget Cohen — Here’s Why Maria Butina’s Plea Is The Worst News Ever For Trump.

Much will be made about Butina’s activities in the U.S. with the NRA and many conservative political figures, including soon-to-be-former Wisconsin Governor Scott Walker and former Milwaukee County Sheriff David Clarke. But RawStory says there’s a more important angle:

“No, what Trump should really be worrying about is what Butina’s guilty plea says about his friend Vladimir Putin in Russia. Butina was obviously operating as an intelligence agent of the Russian state, and she wouldn’t be agreeing to plead guilty and cooperate with investigators for Mueller or anyone else if she hadn’t been given the go-ahead by her bosses back in Moscow. Butina faces a sentence of zero to six months under the federal statute she was charged with, and even if she ends up serving time, she will be deported immediately upon her release from prison.

“Marina Butina wouldn’t have anyplace to go in Russia if her handlers at the Kremlin hadn’t told her it was okay to tell U.S. prosecutors everything she knows about how her attempt to influence American politics worked from 2015 through 2016. If Putin has decided to cut Butina loose, he’s cutting Trump loose as well.”

Laugh before you cry