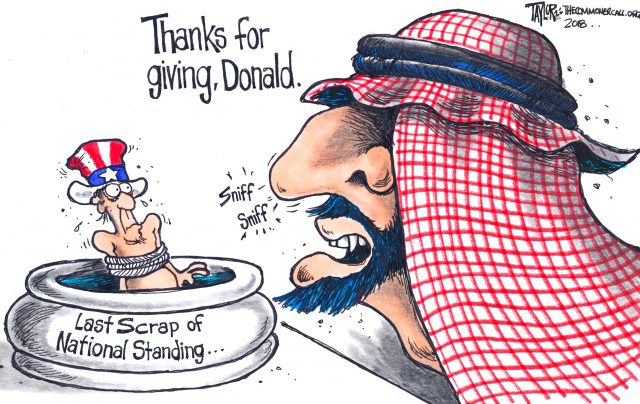 “There’s not a smoking gun, there’s a smoking saw.”

Though it took them far longer than most, a small group of Republicans finally fell in line with this widespread consensus after a secretive briefing by CIA chief Gina Haspel on Tuesday, admitting that all the available evidence suggests MBS orchestrated the murder that has sparked international outrage and brought America’s longstanding military relationship with the brutal kingdom under sharp scrutiny.

“There’s not a smoking gun, there’s a smoking saw,” Sen. Lindsey Graham (R-S.C.) told reporters after the behind-closed-doors briefing. “I think he’s complicit in the murder of Mr. Khashoggi to the highest level possible.”

Graham went on to say he will not support U.S. arms sales to Saudi Arabia until all who are responsible for Khashoggi’s murder are “brought to justice.”

Echoing his GOP colleague following the CIA briefing, Sen. Richard Shelby (R-Ala.) said, “All evidence points to that, that all this leads back to the crown prince.”

These long-overdue statements place Shelby and Graham firmly at odds with President Donald Trump, who issued a bizarre and “dangerous” statement last month claiming that it may be impossible to know who is ultimately responsible for Khashoggi’s murder and vowing to continue selling weapons to the kingdom.