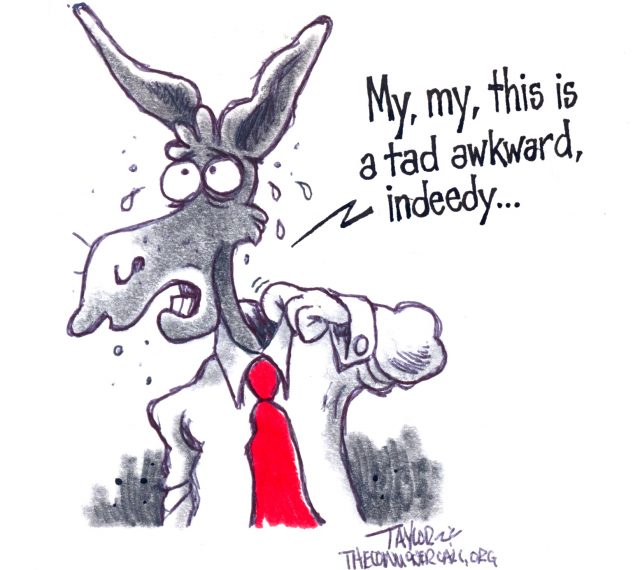 Should we ever get a guarantee of decent health care for all the first surgery for a pre-existing condition is to do a ‘brave heart’ transplant on the democratic party.

There are some things unequivocally obvious. You know, like ice is cold, the sun rises in the east, a dropped ball will respond to gravity, limburger cheese stinks and Donald J. Trump is a racist. Despite the growing body count and Trump’s overt and covert wink-winking, racist dog-whistling and compassionate heart for all things fascist you won’t hear such obvious truth from Democratic National Committee Chair Tom Perez.

On Friday the HuffPost ran a tough interview with Perez (11/12/18). Kudos to interviewer Wil S. Hylton who does what too few American journalists do: not let an interview subject repeatedly serve up finely-honed, desiccated, focus group-groped scripted non-answers.

Hylton opens the interview with a simple question that should be a gently lofted softball pitch across any real democrat’s home plate: “Is Donald Trump a racist?”

“Oh, the record is clear. Mr. Trump — who has repeatedly displayed racist tinged dog whistling in his many rallies — has consistently minimized, excused and even dismissed the surging tide of cruel racist attacks launched by many of his violent followers in the long, dark, brutal months since he took office. Be it overt or covert, the record is clear: Donald J. Trump is a racist and we as democrats and American citizen stand together, united against such callous hatred of our fellow citizens. Next question?”

But the DNC chair doesn’t roll that way. Never straying far from the protective wing of a nearby anxious PR handler who at one point intrudes upon the interview, Perez skips, waltzes, jitterbugs, limbos, quick steps and clog dances his way around Hylton’s perfectly legitimate, softball question with only one obvious answer: Is Donald Trump a racist?”

Dammit, Tom — plain as the yellow stripe running down your back — we have a growing tally of dead, maimed and injured fellow citizens to prove the point.

Instead of labeling Trump what he is, Perez yammers on, stammering out his script about Trump being a “divider” and “not who we are as a nation” and bemoans his “divisive behavior” and finally hums some neutered, dusty drivel about the dems answering the call to be a “uniter”.

Imagine how FDR or Truman would have handled such an easy pitch? Grand slam and outta’ the park!

Then, as if that is not bad enough, instead of calling upon a long, proud tradition of democrats and civil rights martyrs  standing against racism and bigotry, Perez cites George W. Bush — George W. Freakin’ Bush!!! Yeah, in the modern Democratic Party a lying war mongering Republican criminal purveyor of torture is cited as a positive civic example on the issue of racism!

So what’s that question I hear from so many these days: “What is it the democrats stand for?”

We know they are against Trump, but what is it they are for and why oh why are they such timid, meek, mealy-mouthed, soggy-bottomed, slack-jawed, robotic, focus group-fixated, fainthearted, pearl-clutching fraidy cats?

Pounding away on the one bass note string on the party’s campaign policy guitar Perez wouldn’t go beyond the dems’ one-note medley of health insurance. Absolutely, health insurance — with no exemption for pre-existing conditions — is important, but, apparently, Perez and party can only hop on one foot.

Is Donald Trump a racist?

When the chair of the only viable opposition party can’t muster a short, memorable, values-based truthful declarative response to that simple question you know the problems in the DNC run deep as bone marrow. And when that party is the only one viable to face down a growing fascist movement we are all in deep trouble.

Oh, hell yah! Absolutely! I will vote  for every dem but Rep. Ron Kind. That spot on my ballot will again remain empty.

Should we ever get a guarantee of decent health care for all the first surgery for a pre-existing condition is to do a ‘brave heart’ transplant on the democratic party, STAT!!

You can link to the Perez interview here. Unfortunately, you will find it salted with other toe-curling disappointments.

(Commoner Call column and cartoon by Mark L. Taylor, 2018. Open source and free for non-derivative use with link to www.thecommonercall.org )

The Guardian Podcast — Dem Midterm Message: All (And Only) About Trump?

Besides opposition to Trump, few know what democrats stand for.

Gary Younge visits Racine, Wisconsin, one of the bellwether races in the US midterms. In recent history the city has been a reliable predictor of which way the country will swing. But how much will the Trump factor influence the result?

Two years on from the election of the most bombastic, divisive, jaw-dropping Republican president that America has ever seen, the Democrats finally have a chance to push back. While Trump himself is not on the ballot, the midterm elections are a chance for voters to boost the president, or check his powers.

The Guardian’s Gary Younge has spent the past weeks in Racine, Wisconsin, a swing battleground that usually reflects the national result. So what do voters make of the race? How much influence will Trump really have? And how worried should the Democrats be about failure on 6 November?