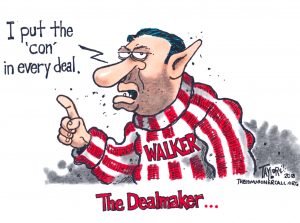 The costs include taxpayer subsidies to the company totalling more than $4.5 billion, the largest subsidy for a foreign corporation in American history.

In September of 2017, Governor Scott Walker, Republican of Wisconsin, signed a contract that would make his state the home of the first U.S. factory of Foxconn, the world’s largest contract electronics manufacturer. The company, which is based in Taiwan and makes products for Apple, Sony, Microsoft, and Nintendo, among others, would build a 21.5-million-square-foot manufacturing campus, invest up to ten billion dollars in Wisconsin, and hire as many as thirteen thousand workers at an average wage of fifty-four thousand dollars a year. For Walker, whose approval had fallen to the mid-thirties after his aborted Presidential run, the deal was seen as a crucial boost to his reëlection prospects. “The Foxconn initiative looked like something that could be a hallmark of Walker’s reëlection campaign,” Charles Franklin, a professor and pollster at Marquette University Law School, told me. “He could claim a major new manufacturing presence, one that would also employ blue-collar workers in a region where blue-collar jobs are more scarce than they used to be.”

As the public has become aware of the spiralling costs associated with building a new Foxconn plant in Wisconsin, the deal has become something of a political liability for the governor.

The idea of putting the plant in southeastern Wisconsin originated in April of 2017, during a helicopter ride President Donald Trump took with Reince Priebus, a Wisconsin native and Trump’s chief of staff at the time. Flying over Kenosha, Priebus’s home town, they passed the empty lot that once held the American Motors Corporation plant. “Why is all that land vacant?” Trump asked, according to an account Priebus gave to a Milwaukee television station. “That land should be used.” When Terry Gou, Foxconn’s chairman, came to the White House to discuss Foxconn’s desire to build a U.S. factory, Trump suggested the site in Kenosha. It wasn’t big enough, but the town of Mt. Pleasant, fifteen miles north, pursued the company aggressively, and was ultimately selected by Foxconn in October of 2017.

The project moved quickly. Last June, a groundbreaking ceremony was held in Mt. Pleasant to celebrate a political triumph for Trump and Walker. After depositing a couple scoops of earth with a gold-plated shovel, Trump called Foxconn’s future campus “the eighth wonder of the world” and hinted that its promise of well-paying manufacturing jobs could be a model for other states in the Midwest, which were, like Wisconsin, crucial to Trump’s narrow Electoral College victory in the 2016 election. “I recommended Wisconsin, in this case,” Trump said. “And I’ll be recommending Ohio, and I’ll be recommending Pennsylvania, and I’ll be recommending Iowa.”

But as the public has become aware of the spiralling costs for these jobs, the Foxconn deal has become something of a political liability for Walker …