“In Georgia’s upcoming gubernatorial election, popular confidence is threatened not only by the undeniable racial discrimination of the past and the serious questions that the federal courts have raised about the security of Georgia’s voting machines, but also because you are now overseeing the election in which you are a candidate.”

Within a week we will know the results of the mid-term election and whether we have any new checks against Trump’s march to undo our democratic values. The outcome will come down to voter turn–out, something Republican voters are traditionally better at than Democrats, especially in mid-term elections. While those of us in Wisconsin face our own challenges, Georgia is a candidate for the state facing the most pervasive challenges for Dem voters: Jimmy Carter Calls For Brian Kemp To Resign As GA Secretary Of State.

Georgia, and specifically Georgia Secretary of State and gubernatorial candidate Brian Kemp have ignored guidance for improving vote integrity while at the same time stepping up barriers to voting, mostly for black voters.

“A coalition of civil rights groups moved to sue Kemp earlier this October to block enforcement of an “exact match” requirement that they said endangered more than 50,000 voters, most of whom are African Americans.”

This comes after an extensive voter roll purge in 2017 of “more than a half million people”. ()

“”In Georgia’s upcoming gubernatorial election, popular confidence is threatened not only by the undeniable racial discrimination of the past and the serious questions that the federal courts have raised about the security of Georgia’s voting machines, but also because you are now overseeing the election in which you are a candidate,” Carter wrote in a letter to Kemp dated October 22.”

To which Kemp responded with an assurance that, “while outside agitators disparage this office and falsely attack us, we have kept our head down and remained focused on ensuring secure, accessible, and fair elections for all voters”. 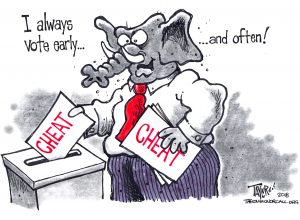 Georgia has also failed to upgrade voting equipment opting to remain with touch-screen technology which is paperless. Once again, it was Kemp’s decision:

“”Kemp has resisted pressure — and the overwhelming recommendations of security experts and policymakers — to use paper ballots in the midterms amid concerns about the security of the state’s electronic voting machines. Election integrity advocates brought a federal lawsuit seeking to force the state to adopt paper ballots in the midterms amid fears that votes will not be safe from potential hackers, especially from Russia. Last month, a federal judge denied a motion that would have forced Georgia to adopt paper ballots ahead of the midterms.”

Georgia is one of only five states that will vote without paper backups.

Concerns over voting in Georgia are not new, there were serious questions over Russian hacking during the 2016 election: Was Georgia’s Election System Hacked in 2016?

The sub-head reads: Robert Mueller’s latest indictments raise new questions about the integrity of Georgia’s voting infrastructure. Why is the state stonewalling?

The article is from July 2018 and highlights an additional set of concerns about vote integrity raising more questions over Kemp’s intransigence. The Department of Homeland Security had stated “Russians…evidently never bothered at all with servers in Georgia”:

“This was odd because around the same time the Russians were targeting other states, a security researcher in Georgia named Logan Lamb discovered a serious security vulnerability in an election server in his state. The vulnerability allowed him to download the state’s entire database of 6.7 million registered voters and would have allowed him or any other intruder to alter versions of the database distributed to counties prior to the election. Lamb also found PDFs with instructions and passwords for election workers to sign in to a central server on Election Day as well as software files for the state’s ExpressPoll pollbooks—the electronic devices used by poll workers to verify voters’ eligibility to vote before allowing them to cast a ballot.”

Kemp, “was the only Secretary of State to refuse security assistance from the Department of Homeland Security prior to the election, has insisted for more than a year that his state’s voting systems were never at risk in the 2016 election, because DHS told him the Russians had not targeted Georgia”.

That might have been the end of the debate except:

“This changed on Friday, however, when the Justice Department unsealed the indictment against 12 Russian intelligence officers who oversaw an operation that, the department says, included targeting county websites in Georgia.”

This news highlighted other known concerns over Kemp’s ‘management’ of the state electoral system:

““These sophisticated agents certainly [would have known] that Georgia’s entire election programming and management system, including private voter data, was on a single central computer managed by Secretary of State Kemp’s contract agent at Kennesaw State University,” she told Politico.”

And to add further insult:

“…technicians at Kennesaw State University wiped the Center’s servers clean, destroying any evidence that might have been on them. Two backup servers also were wiped a month later—news the plaintiffs learned only months later after obtaining emails that disclosed the data destruction. Kemp’s office initially distanced itself from the destruction, accusing the technicians of “ineptitude” for wiping servers that were part of litigation. Kemp later said, however, that the wiping had simply been standard operating procedure performed any time servers were taken out of service.”

Fortunately the FBI was able to make identical images of the servers.

Abrams is polling statically in a dead heat against Kemp.

We in Wisconsin face our own voting challenges with Walker purges of voter rolls and state elections benefiting the GOP through gerrymandering – meaning the makeup of our state government is unfairly skewed to GOP advantage in spite of higher Dem vote counts. Wisconsin, where Dem gubernatorial candidate Tony Evers is also polling in a dead heat against his opponent, Scott Walker. Wisconsin, where Paul Buhr is the Dem candidate for the state Assembly 96th District and running against an opponent who sees no problems with gerrymandering benefiting the GOP. (In other words he wants the politicians to pick their voters, instead of the other way around

VOTE. VOTE FOR FAIRNESS. VOTE FOR OVERSIGHT. THROW THE BUMS OUT.