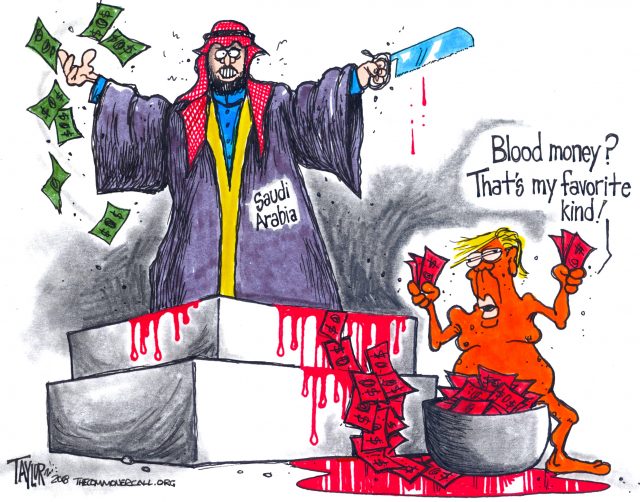 “The job of the media is ultimately to inform the public about the world as it truly is. It would be a shame for the death of a member of the media to be used in service of obfuscation of the truth. The truth is the American government cares about business. The American government does not care about the murder of a journalist if caring about the murder of a journalist would significantly impede business. This has always been the calculation, and any journalist who wrote otherwise should now take some time to taste the bitterness of reality. If Jamal Khashoggi had been an American-born staff writer for the Washington Post, the tut-tutting by the American government would have been louder, but the final outcome would be the same. Business must go on. Remember this the next time that the U.S. government tries to sell the public on the idea that they are undertaking military action in order to protect someone else’s human rights. That is not what we do.

“At least let the man’s murder open a conversation that’s based on the truth. Saudi Arabia and the United States will both be happy when the pageantry of concern is concluded, so they can get back to business.”

With Khashoggi Believed Killed, Ethics Watchdog Says: We Must Ask If Trump’s Silence “Being Dictated by His Business Interests” With Saudis

As new evidence emerges that Washington Post correspondent Jamal Khashoggi was tortured and killed inside the Saudi consulate in Istanbul last week, lawmakers and ethics watchdogs said Thursday that President Donald Trump’s reluctance to hold the Saudis responsible for Khashoggi’s possible murder is exactly what they’ve warned about when calling attention to Trump’s refusal to divest from his businesses—which, according to the president himself, Saudis have invested tens of millions of dollars over the years.

Saudi officials, along with other international political figures, have stayed in Trump’s hotels since he took office in 2017, with lobbyists from Saudi Arabia spending $270,000 in the Trump International Hotel in Washington, D.C. last year alone.

“Saudi Arabia, I get along with all of them,” Trump said in 2015. “They buy apartments from me. They spend $40 million, $50 million. Am I supposed to dislike them? I like them very much.”

The Saudis also have a long history of business dealings with Trump, including a Saudi prince’s purchase of a yacht and a hotel from him in the 1990s when the real estate developer was in need of money. But Democrats in Congress and the group Citizens for Responsibility and Ethics in Washington (CREW) have especially expressed concern with his financial entanglements with the kingdom after he took office, saying they blatantly violate the U.S. Constitution’s emoluments clause.

On Twitter, CREW suggested that Saudi Arabia’s status as a loyal customer to the Trump Organization—from which the president refused to divest after taking office—has likely been on Trump’s mind this week as he’s told the press that he won’t considersanctioning or condemning the Saudis over Khashoggi’s disappearance.

Trump’s ongoing business relationship with the Saudis—including Crown Prince Mohammed bin Salman, also known as MbS, whose visit to the president’s hotel in New York helped raise its revenues by 13 percent earlier this year—violates the Constitutional clause that forbids the president from receiving gifts or payments from foreign officials. …

The kingdom has scores of paid friends it can marshal to talk to their own friends in government and the private sector.

WASHINGTON ― Saudi Arabia is facing an unprecedented backlash from the U.S. elite over the presumed murder of Saudi journalist Jamal Khashoggi ― and it may respond with an unprecedented offensive of its own to try to turn things around.

Congress is threatening sanctions on the longtime U.S. partner, President Donald Trump is publicly demanding answers about Khashoggi’s fate, and major American businesses are backing out of a high-profile Saudi conference. But as top Americans suggest the U.S.-Saudi relationship may be about to fundamentally change, the Saudis have many powerful levers to pull in their efforts to maintain bipartisan support for their frequently controversial policies.

The arrival of a businessman president has made a whole new level of pay-to-play possible. Saudi spending at Trump hotels has spiked in recent months, and Trump was already exploring potential new deals in the kingdom during his presidential run.

By directing billions of dollars of Saudi money into the U.S. for decades, Riyadh’s ruling family has won the support of small but powerful circles of influential Americans and courted wider public acceptance through corporate ties and philanthropy. It’s been a solid investment for a regime that relies heavily on Washington for its security but can’t make the same claims to shared values or history as other American allies like Britain. For years, spending in ways beneficial to the U.S. ― both stateside and abroad, such as its funding Islamist fighters in Afghanistan to combat the Soviet Union ― has effectively been an insurance policy for Saudi Arabia.

At times of crisis, like after 15 of the 19 9/11 attackers turned out to be Saudis or when President Barack Obama signed a landmark arms control deal with Saudi rival Iran, the Saudis have used their clout to shield themselves from tough questions or to propagate the idea that the U.S. needs the kingdom.

Khashoggi, who had been living in the U.S. before disappearing in Turkey this month, is today very unlikely to be returned alive. High-level criticism of the kingdom is growing, and a key foundation of the U.S.-Saudi relationship ― American reliance on Saudi oil ― is weaker than ever. Meanwhile, Saudi Arabia feels ready to fight. …