The news media is doing a much better job of connecting the dots with Trump-Russia corruption. This is of course with the benefit of how much more is known. There are also so many good Trump-Russia books that have been written including one of the more recent, ‘The Apprentice: Trump, Russia and the Subversion of American Democracy’ by Pulitzer Prize winning author Greg Miller.

Miller sets out to tell the story of the “political crime of the century” by relating all and connecting all that is known. The style is interesting, ‘even’ comes to mind compared to the breathiness and innuendo of Michael Wolff’s ‘Fire and Fury’. Or the high-mindedness of former FBI Director James Comey’s, ‘A Higher Loyalty: Truth, Lies and Loyalties’. 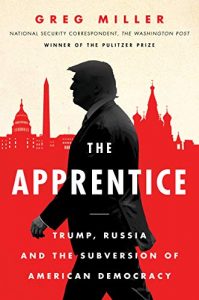 Because of our history, ‘The Apprentice’ is a challenging but important read. Can anyone really revel in the persistent lies of Trump and his cult? Certainly many of us hope for justice, but that’s not at all the same as enjoying the criminality or the legal jeopardy of this cult of grifters. We can accept with disappointment and more the GOP characterization of Kavanaugh protestors as an “angry mob” again demonstrating their unique ability to an arrogant victor and angry, threatening victim at the same time. But it is another thing entirely when Trump apologizes to Kavanaugh, “on behalf of the nation.” We know Trump makes no attempt to be the president for all Americans and to add insult he mocks the courageous Dr. Christine Blasey Ford and others accusing Kavanaugh of sexual assault calling it, “a campaign of political and personal destruction based on lies and deception.”

Everyone likely has their own stomach-churning ‘favorites’ of the many thousands of bald-faced Trump lies as well as the contributions of some of his cronies in crime. Who doesn’t think of the many women who have accused Trump of sexual assault when Trump apologizes to Kavanaugh “on behalf of the nation”? Does anyone really enjoy the contradiction of Trump’s former national security adviser who pleaded guilty, Michael “Lock Her Up” Flynn having lied to the FBI about his communications with Russians and his unreported lobbying on behalf of Turkey (Flynn still faces legal jeopardy should he be found to have influenced U.S. policy in ways favorable to Turkey).

Flynn was one of the people in the room (Trump Tower) in December 2016 when Trump and advisers were briefed by former CIA Director James Brennan, former National Security Adviser Mike Rogers and former FBI Director James Comey about the extensive involvement of Russia to influence the election in favor of Trump. The collective response of the Trump team was remarkable for their lack of curiosity about Russian involvement and possible ongoing risks, but instead focused on how to spin a message to announce the Russians did not swing the outcome of the election (which Clapper had pointed out their investigation “had not the authority or capabilities to assess”.).

We know Flynn lied, he pleaded guilty to this, but there is a valid question about the roles of former Trump spokesperson Sean Spicer and Vice President Mike Pence. Both offered their assurances that Flynn had not discussed U.S. sanction policy against Russia with Russian Ambassador Sergei Kislyak – when, it shown, he actually had. Is Flynn the only one that lied through that charade of innocence?

But all of these painful remembrances bring us to this question posed by author and former George W. Bush speech writer David Frum (from May 2017): What Does The President Owe, And To Whom Does He Owe It?

Frum’s commentary reads as if it was written today.

“The special counsel will investigate whether people in the Trump campaign violated any laws when they gleefully leveraged the fruits of Russian espionage to advance their campaign.

“By contrast, what happened in plain sight—cheering rather than condemning a Russian attack on American democracy—will be treated as a non-issue, because it was not criminal, merely anti-democratic and disloyal.

“If it can be proved that Flynn intentionally altered U.S. foreign policy in Turkey’s favor in knowing return for money, he will face legal jeopardy.

“But if the motives cannot be proved beyond a reasonable doubt, the story will disappear from the inquiry.”

We will finish up with Frum’s closing comments and note that in many ways, we know no more today than we did in May 2017 about the most important questions.

“This generation’s variant of “What did the president know, and when he know it?” Is “What does the president owe, and to whom does he owe it?” Not: “Is the president a crook?” (We had available all the information needed to determine that on election day.)

“But: “Is the president a risk to national security?” The most urgent task ahead is not a criminal investigation, potentially leading to indictments and prosecution.

“The most urgent task ahead is a broader counter-espionage inquiry conducted not to mete out punishments, but to discover and publicize the truth, however disturbing.”

We hope for answers. But if the GOP retains control of Congress after the midterm election we likely will learn very little. 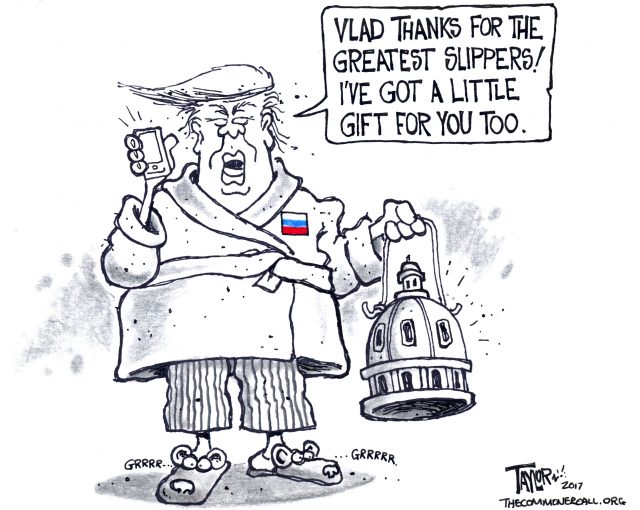