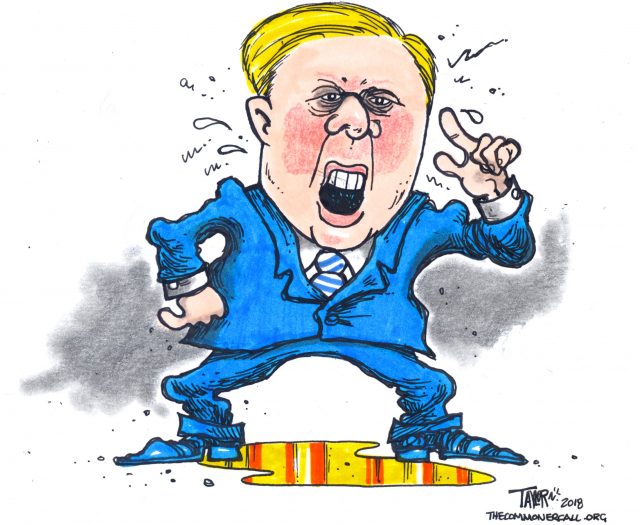 Kavanaugh And The Political Pollution Of The Supreme Court

“This is very dangerous.”

Could the Kavanaugh nomination controversy damage the Supreme Court itself? We’ll look at the effect ever-deeper politicization is having on the high court.

Dahlia Lithwick, courts and law reporter for Slate, and host of the Amicus Podcast. (@Dahlialithwick)

Christopher Schmidt, professor of law at the Chicago-Kent College of Law. Legal historian and co-director of the Institute on the Supreme Court of the United States. (@cwschmidt1)

As his confirmation steamrolls ahead, Americans should be terrified.

When Thursday’s Senate Judiciary Committee hearing on the nomination of Judge Brett Kavanaugh was over, it wasn’t quite clear what had hit those of us who’d been sitting in the room. The hearing room in Dirksen is tiny, and while the slammed binder and the escalating shouting of the nominee might have looked pretty dramatic on TV, inside the chamber, the effect was that of an out-of-control house party. Too loud, too scary, too close, too real. Like being locked inside something terrible with the music cranked up.

There were two distinct moods in the Kavanaugh hearing: Ford evoked undistilled sadness and vulnerability; Kavanaugh evoked raw fear that if he were ever crossed, he would lose control.

Anita Hill once told me that, in 1991, Clarence Thomas had race and she had only gender. But now, in 2018, Brett Kavanaugh had rage and Christine Blasey Ford had only gender. With the Senate Judiciary Committee moving on Friday to advance Kavanaugh’s nomination to the full Senate without any further inquiry around Blasey Ford’s damning and plainly credible testimony that Kavanaugh had gleefully and drunkenly sexually assaulted her at a 1982 house party as his buddy Mark Judge watched, it appears as though his rage alone will have been enough to earn him life tenure on the highest court in the land.

The dynamic of Thursday’s hearing was consistent: He had fury, and contempt, and seething threats that the republic would pay if he were thwarted. She had to functionally lie back and try not to infuriate anyone, as Republicans cowered behind the female prosecutor, Rachel Mitchell, they had brought on to interrogate her. That was until it was Kavanaugh’s turn to speak, when they quickly jettisoned that paper-thin pretense of investigative “independence” and joined Kavanaugh to form a chorus of angry shouting men. They towered silently over Mitchell for the first half of the hearing, then summarily ignored her when she wasn’t offering questions fast or furious enough to protect their nominee. …