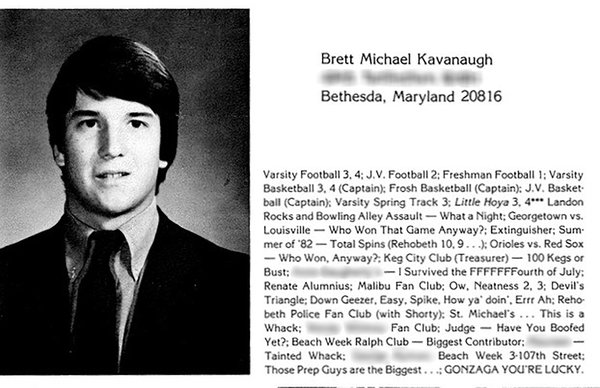 The masters of the universe, it turns out, are losers.

The Brett Kavanaugh hearing was a kaleidoscope of family and God and prestigious clerkships spliced with boofing and ralphing and brewskis. It was a thorough dressing-down. In the end, one was left with the impression of an unremarkable guy who was born on a conveyor belt to power, without much obligation to distinguish himself from his peers. On the contrary, his success was relatively guaranteed on the condition that he didn’t distinguish himself from them, that he simply play nice with the fellas — and not necessarily so nice with women — from prep school to the Ivy League to the White House and beyond.

What struck me most about yesterday’s hearing, cutting through Kavanaugh’s tone-deaf retorts and indignant whinging and his frequent professions of love for beer, is how utterly ordinary he is. This guy is juvenile, arrogant, sexist — and very familiar. It pointed to a larger truth: the people running the show are callous and dangerous, but they’re also astonishingly average. They have no irreplaceable qualities or insights that would oblige us to put up with their bullshit. They would hate for us to realize this.

The guys like Brett Kavanaugh who run the show have no special qualities or insights that should oblige us to put up with their bullshit. They would hate for us to realize that.

It was a familiar feeling to me. The Hillary Clinton campaign was my big emperor-wears-no-clothes moment, when the mundane ineptitude of the ruling elite exposed itself and demolished whatever faith I retained in rule-by-the-most-excellent. Until then I’d entertained the latent notion that, despite the Democratic Party’s frequent refusal to stand on the side of working people, there was probably a reason its top brass were the ones in charge of battling Republicans. Because they knew how to win. Because they were in charge. It was tautological.

When I balked at yet another corporate compromise floated by the Democrats, a small voice assured me it was just an encounter with the dark arts of pragmatism. I wouldn’t understand — after all it wasn’t me who was appointed to be Hillary Clinton’s campaign manager, it was presumably someone who knew what they were doing. Their suitability to a task as critical as defeating the Right was self-evident, since they were the ones charged with the task.

That voice fell permanently quiet for me during the 2016 presidential election. Politics provides no shortage of moments such as these, when the mask of power slips and you realize the people at the top are not worthy of the respect you afford them — not just as individuals, but as a class. I suspect George W. Bush’s aggressive vacuity as he ramped up austerity and shepherded the nation into interminable war prompted similar revelations for many. But as our society continues to rear new people instilled with the belief that decisions about the fates of millions are made by those whose rarified expertise, superior talents, and impressive families qualify them to make those decisions, the illusion regenerates perpetually and must be shattered time and time again.

Perhaps the greatest threat to this illusion in all American history is Donald Trump. …