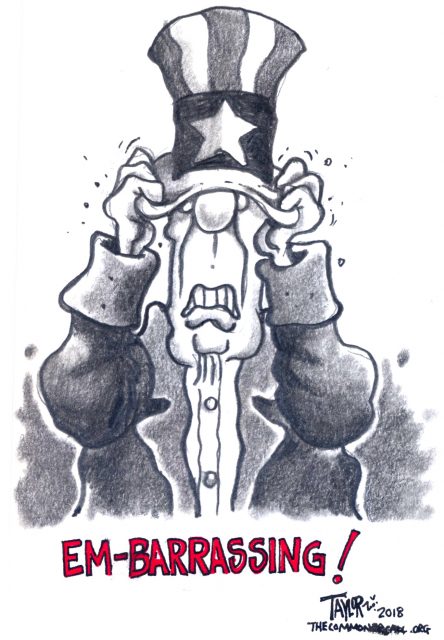 Trump Is A Laughing Stock. But If We Weren’t Laughing, We’d Be Crying

For the rest of the world, President Donald Trump’s America is a laughing stock, not a leader.

That was the takeaway from Trump’s speech to the 2018 United Nationsgeneral assembly. Trump opened his speech the same way he opens his campaign rallies, TV interviews, and probably conversations with every visitor he meets: “In less than two years, my administration has accomplished more than almost any administration in the history of our country.”

The response from the leaders assembled in the room? Laughter. The entire world literally laughed at the US president – and they weren’t laughing with him.

Even Trump himself was taken aback: “I did not expect that reaction …”

And while reporters and foreign policy experts could not recall another leader ever before drawing derisive laughter at a UN speech, it did not end there. When Trump made another claim – “Germany will become totally dependent on Russian energy …” – the cameras revealed the German delegation laughing and snickering to one another.

With Trump’s own behavior and policies as a backdrop, the substance of Trump’s speech merited laughter – it was an incomprehensible joke.

The main theme of Trump’s speech was protecting US “sovereignty” and he said that all countries should do likewise. He claimed: “The United States will not tell you how to live, work or worship. We only ask that you honor our sovereignty in return.” But shortly thereafter Trump spent portions of his speech telling Iran and Venezuela what to do at home. …

Since he entered the White House, President Donald Trump has given few press conferences. On Wednesday, he made it clear why he and his team avoid the medium.

In a wild, disjointed, and disrespectful display, Trump launched into a rant about his supposed accomplishments, his dissatisfaction with the coverage of his presidency, and foreign relations. He spoke over women, lied, twisted the facts, berated reporters, and jumped from topic to topic in a frequently incoherent manner.

Here are just seven of the wildest moments of the press conference: …

In a rare event, US president Donald Trump has fronted reporters for a solo press conference and there was no shortage of colour. Among them was the moment he called a reporter from Kurdistan ‘Mr Kurd’ and talked of the respect China has for his ‘very, very large brain’. Trump even managed to quote Elton John. Link to 2+-Minute Video